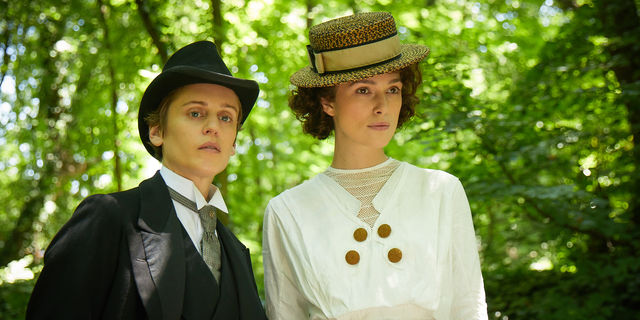 Keira Knightley has starred in no shortage of period dramas, but her latest, Colette, is different from Atonement or Anna Karenina or Pride & Prejudice or King Arthur. Because this one puts real, historical LGBTQ folks at the film's center. And the romance that audiences will root for is not between Colette and her husband, but between Colette and a character named Missy. Missy was a real person named Mathilde de Morny, who dressed in men's clothing, used both "he" and "she" pronouns, and was sometimes called "Uncle Max." (Because both Gough and the historical Missy switch back and forth between "he" and "she" pronouns, I'll do the same here, too.)

About halfway through the movie, Colette (Knightley) sees Missy, dressed in a suit, across a crowded room—and is startled when a friend tells her that Missy is a woman. After the pair speak, they have an instant connection—Missy tells Colette that he knew immediately that Colette was the true writer of the Claudine books, which Colette's husband Willy (Dominic West) takes credit for. Soon after, we see Colette write Missy a letter calling him a "true gentleman." In a later scene, we see Colette correct Willy's use of "she" pronouns for Missy; in another, we see Missy describe to Colette how, the first time he tried on his brother's school uniform, "I knew I was home for the first time."

Actress Denise Gough, who plays Missy, tells BUST on the phone that we can't put today's concepts of gender and sexuality on the real Mathilde de Morny. If she lived in 2018, Missy might identify as a trans man or a butch lesbian (or genderqueer or nonbinary), but in the 1890s, the language wasn't there. "Missy would have been called an 'invert' at that time, because there was no name for being a lesbian or for being trans," Gough explains. "Missy played with the notion of gender identity, and who knows, 100 years later, what it would mean? We do know that she was dressing as a man at a time when it was illegal for her to do so, so she was incredibly brave." 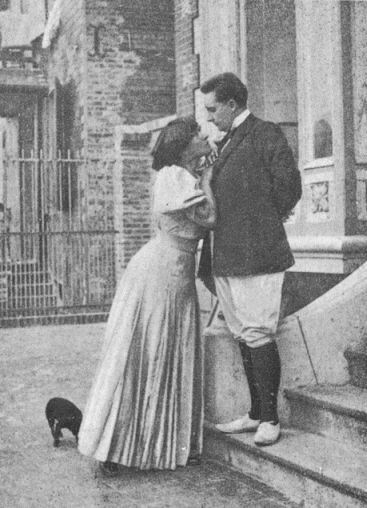 the real Colette and Missy, via Wikimedia Commons

Gough adds that the Colette team worked with experts on trans history; the portrayal of Missy "was not to be taken lightly." To play Missy, Gough—who has primarily worked in theater, most recently earning acclaim for her performance in Angels in America— bound her breasts and wore men's clothes, and she also carried herself like a man. Her body language in Colette is completely different from it is in her other work, especially when compared to her most recent movie, Juliet Naked. "The costume designer was fantastic, so the clothes that she wore really helped, the shoes that she wore really helped," Gough explains. "But she also carried herself a certain way. In theater, you take on the whole body, you just don't take on the bits that will be seen on the camera—so the physicality happened quite naturally."

Gough says that it was because of that care that she, a cis woman, felt comfortable taking the role of Missy. "I'm a woman playing this role, but I'm also an actress, and it was important to me to feel that it was okay to take on the character," she says. "Having spoken to the experts and having read everything they sent me, I felt good about it." She adds, "Wash [Westmoreland, the director and co-writer with his late husband Richard Glatzer] is very progressive in his casting. We have two trans actors playing cis roles, we have an Asian actor playing a character who was white, we have a black actor playing a character who was white, we have a lesbian actress playing a straight woman, we have a straight woman playing a bisexual woman. I love that this film shows how open we can be when we cast things."

Watching Colette, it's impossible not to root for Missy and Colette as a couple: while Colette is vibrant and outgoing, Missy is introverted and supportive—he encourages Colette to fight for ownership of her own work and to pursue her dreams of becoming an actress, but never tries to control her. Also, they just have incredible chemistry, and the sex scene to go along with it. Gough points out that Missy represents a different kind of masculinity than the toxic masculinity of Colette's husband Willy. Whereas Willy quite literally steals Colette's work, Missy is entirely supportive. "Even though he's charming and everything, Willy represents a toxic masculinity, and then Missy represents another type of masculinity, which is far more evolved," Gough says. "It's interesting that [Colette] would fall in love with someone who identifies as a man, but a certain type of man, a more evolved, more progressive, more supportive, empowering man, and really, Missy is the kind of man a lot of men should aspire to be." 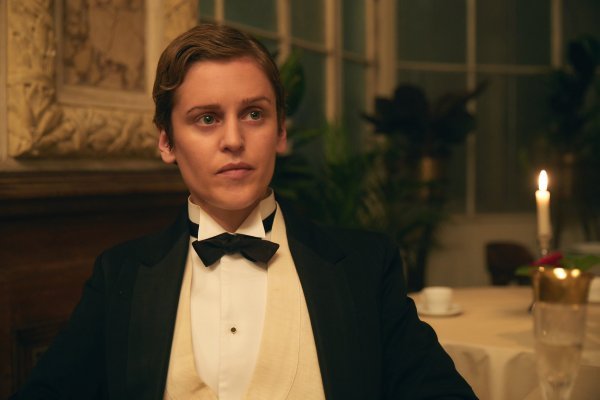 Gough as Missy in Colette

The movie ends with Colette and Missy as a happy couple, but the historical Colette and Missy broke up after seven years together. Not a lot is known about Missy's later life, but he died of suicide at the age of 81. "You can't play the end of the story," Gough says. "I just tried to stay as much as I could in that moment of being in love with this woman….I think Colette was a great light in her life and gave her great joy, but I think in the film, Missy has a more melancholic energy, whereas Colette has a real vibrancy. Missy is maybe more affected by the lack of understanding for who she is than Colette is." This is definitely seen in the movie; in one scene, Colette and Missy share an onstage kiss—and are then pelted with objects thrown by Missy's ex-husband's friends in the audience. After running backstage, they're asked by a journalist if they'll perform the play again. Missy immediately says, "No," while at the same time, Colette answers, "Yes."

Gough says that above all, Missy empowers Colette. "At that time, men were given all of the power; they had the power to control, to take what they wanted. Women had no agency. So Missy's type of man was more evolved because she had the experience of being held back as a woman, so when she did finally present as a man, she had the wealth of experience of what it was like to be a woman, and be treated the way women were treated back then. I mean fuck, if we think it's bad now, can you imagine what it was like then when you weren't able to vote? You weren't legally allowed to wear fucking trousers? So Missy, Uncle Max, was a very progressive, brilliant man—and one that didn't believe in stealing from women. Max wanted to empower Colette to be all she could be, and men at that time, they didn't understand women's power. It was very frightening to them, women's power."

After I watched Colette the first time, I went immediately to Google to find out more about Mathilde de Morny—but there's very little out there, and what is there doesn't agree about much, including which pronouns to use to refer to Missy. Gough says that the absence of information available about Missy is part of how women's stories and LGBTQ stories have been erased from history—something that she hopes Colette can help to begin to correct. "If Colette had been a man, there would have been many, many, many, many movies made of her already," she points out. "But we're still in a place where we think those stories won't sell, and once again, we're proving that it's not true. Women's stories sell really fucking well."

It's not just about movies, either, Gough says. "Women's stories, trans stories, lesbian stories, LGBTQ stories from 100 years ago before we had the names, we should be reading about them and we should be learning about them as children when we're in school, but we don't. We hear about the big, brave, men who change the world, and nothing about the women—it's not just about films, it's about education. We need to be inserting these stories into children's education so they have a more rounded worldview. Because there's only so much you can learn about Winston Churchill, you know?"

The Baddest Babes To Ever Write Books