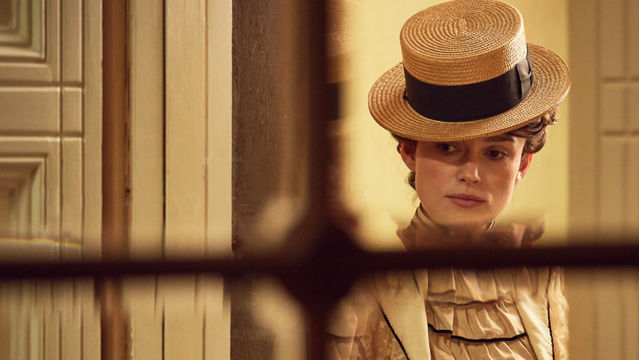 Keira Knightley gets corseted up once again for this biopic of the French author Colette. We first meet Colette in the 1890s; she is then a young country girl named Gabrielle who is about to be married to an older man, the pretentious Parisian author Henry Gauthier-Villars (Dominic West). Once married, Henry cheats on Gabrielle relentlessly, and he hires ghostwriters to crank out works published under his nom de plume, Willy. After some consideration, Gabrielle embraces Henry’s world, renames herself Colette, joins his ghostwriting operations, and writes a novel based on her own life,Claudine at School, that becomes a bestseller.

As she keeps writing Claudine books and the series becomes more and more of a phenomenon, Colette’s resentment against Willy grows, and she begins longing to publish her writing under her own name. She and Henry also open their marriage, and Colette has an affair with American socialite Georgie (Eleanor Tomlinson) before eventually falling for the shy, masculine Missy (Denise Gough). Their sweet, supportive romance is a highlight here.

Director and co-writer Wash Westmoreland ends the story before getting into the parts of Colette’s life that would make it hard for audiences to root for her (she notoriously had sex with her teenage stepson). But the film is sure to re-ignite interest in this groundbreaking female author. (4 / 5)