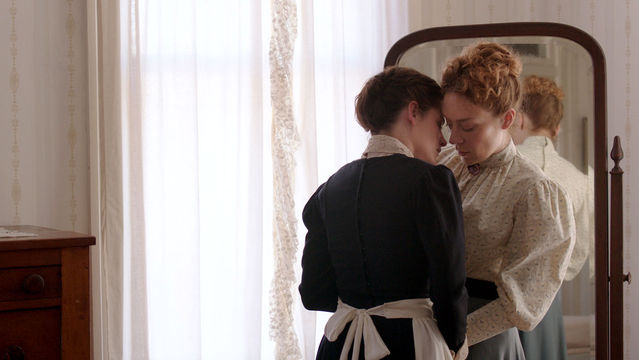 On August 4, 1892, Lizzie Borden's father and stepmother were brutally murdered with an axe. Lizzie was arrested, charged with murder, and acquitted—and we, as a culture, have been obsessed with her story ever since. The new thriller Lizzie, directed by Craig William Macneill and starring Chloë Sevigny as Lizzie Borden and Kristen Stewart as the Bordens' maid Bridget, joins many modern retellings of the LIzzie Borden story—recently Lifetime's 2014 TV movie Lizzie Borden Took An Axe and 2015 miniseries the Lizzie Borden Chronicles, and Sarah Schmidt's 2017 novel See What I Have Done.

Macneill's version begins with Lizzie's discovery of her father's body: she yells for Bridget to get the doctor, and is then interrogated by the police. Soon, we flash back to Lizzie's and Bridget's lives leading up to the murder. Lizzie—unmarried and "past ripe," as her creepy uncle puts it—is constantly battling her father Andrew (Jamey Sheridan), stepmother Abby (Fiona Shaw), and uncle John (Denis O'Hare) for the right to control her own life. We see Lizzie argue with Andrew and Abby over attending a play alone; we see her steal from Abby, leading Andrew to retaliate by brutally killing Lizzie's pet birds; we see her resist Andrew's orders to call Abby "Mother"; and we see her listen in as Andrew and John discuss institutionalizing her.

Because Lizzie has fits. Sometimes, randomly, the world fades and she collapses into seizures. It looks like epilepsy and feels like Betty Friedan's "the problem that has no name"—a physical expression of rage at the limits of a sexist society. For her part, Bridget goes to work for the Bordens out of economic necessity. Immediately, Abby informs her that here, she'll answer to "Maggie"—the Bordens can't be bothered to learn the name of every Irish maid that comes to work for them. Soon, Bridget finds that Abby's prejudice is the least of her worries. The household regularly receives threatening, anonymous letters, and Andrew Borden has made enemies out of some of his tenant farmers. Worst of all, Bridget has to suffer near-nightly sexual assaults from Andrew. As Bridget explains to Lizzie, she can't leave and she can't stop him, because she can't afford to lose the job—and because Andrew would refuse to give her a reference if she did quit. Both Lizzie and Bridget face so many limitations on their lives that it's easy to see a murder motive. It's only a question of what will be the final injustice that makes one—or both—of them snap.

Despite dialogue that hits you over the head with its attempt at feminist themes ("Men don't have to know things, Bridget. Women do," is how Lizzie offers to tutor Bridget), the first half of Lizzie is, for the most part, strong. Macneill successfully builds tension slowly: We know the murder will happen—but we don't know when or how. The story works best when we stay inside the Bordens' house, watching Lizzie and Bridget find small ways to fight back against Abby, Andrew, and John, with occasional but rare aid from Lizzie's older sister Emma (Kim Dickens). Lizzie leaves glass outside Bridget's door so that Andrew will step on it; Bridget leaves Lizzie secret notes in folded laundry. Their shared resistance develops into a romance that, after several almost-kisses, gets physical—but the movie's much-buzzed-about nudity comes not from the sex scene, but from the murder scene. The reasoning is practical—to avoid leaving bloodstained clothes as evidence—and the naked murders aren't exactly sexy, but the attempt to subvert the male gaze so dramatically feels, like the dialogue, so over-the-top that it's hard to take seriously.

The main problem with Lizzie is that the structure of the story—the discovery of the bodies, the flashback, the murder itself, and then the trial—means that the post-murder scenes feel like an afterthought. The courtroom scenes are random and rushed; Lizzie and Bridget's relationship swings back and forth between love story and manipulation without making much sense; Emma is so sidelined that she's more of a marker of the movie's commitment to historical accuracy than an actual character. A postscript about Lizzie's trial—she was acquitted because the all-male jury couldn't believe a woman of Lizzie's status could murder her own family—attempts to tie it all together with a feminist bow, but doesn't succeed in making the film feel finished.

In a candid interview with the Huffington Post in January, Chloë Sevigny—who is a producer as well as the star, and worked for years to get the movie made—expressed her disappointment at the final cut. "There was more to the relationships that made them more complicated, and also then informed why Lizzie [commits the murders]. Now it’s a little more vague than what [screenwriter] Bryce [Kass] and I intended originally to do," she said. "...But we hired [director Craig William Macneill], and this was his vision and this was his interpretation of what we gave him.”

Maybe that's why the feminist themes seem forced—the story is written by a man and directed by a man, even if Sevigny, as the star and the producer who worked to get this movie made, is its driving force. If Lizzie had had a different (preferably female!) director, I suspect it'd be both a better and a more feminist film. The story shows promise, but the result falls short—so I'll just be here reading See What I Have Done and imagining what Lizzie would look like if it were directed by Karyn Kusama, whose 2015 film the Invitation is a much better slow-burning thriller set in a creepy house.  3 / 5