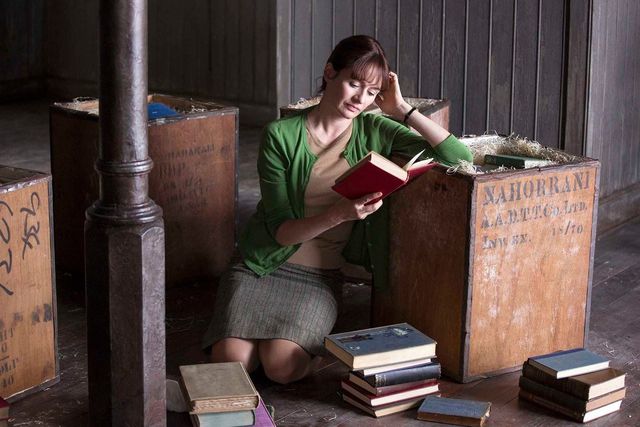 Forty years after its release, fans of Penelope Fitzgerald’s acclaimed novel The Bookshop are finally getting the opportunity to see it on the big screen. But don’t get too excited. Despite following the novel almost exactly, the adaption’s not that great.

Directed by Isabel Coixet—the woman responsible for hit films like Learning to Drive, The Secret Life of Words, and My Life Without Me—The Bookshop follows Florence Green (Emily Mortimer), a widow in search of fulfillment during the late 1950s. After arriving in a Hardborough, England, a fictitious small seaside town, Florence sets out to open their first bookshop in a vacant, dilapidated old building. But problems arise immediately upon her arrival.

Florence is a character all bibliophiles can relate to. She’s quirky, full of wit, and overflowing in charm. It’s these qualities that separate her from her neighbors who don’t hold an ounce of interest in reading and certainly don’t tolerate anyone living outside of the Hardborough norm. But for Florence, the shop represents more than just her love of words—it connects her to her late husband. As a flashback explains, the two met amongst the stacks of a bookshop some years prior.

It’s this deep-rooted connection that encourages Florence to put her foot down when the town’s self-proclaimed leader, Violet Gamart (Patricia Clarkson), and her crone, Milo North (James Lance), attempt to take the bookshop out from under her nose. In Violet’s opinion, the old shop would be of better use to Hardborough as an art gallery.

The tension between the two women hits a breaking point when Florence, per recommendation from her bookish buddy Edmund Brundish (Bill Nighy), a quiet old man who spends his days in seclusion with his nose in a book, orders some 200 copies of the recently released Lolita. The scandalous book displayed in every corner of the bookshop’s window lights a fire underneath Violet, and she soon finds a loophole that will put Florence out of business.

The Bookshop has all the ingredients of a good film. It’s a beautiful period piece with an excellent cast, based on a best-selling book, and yet it falls flat. The book doesn’t translate well onscreen. Its unnecessary narration squeezes the life out of its actors, leaving them little to work with, and thus not making use of their talent. But The Bookshop isn’t a complete flop. Its set and costume design in combination with its bookish plot really do work to its advantage because it’s sure to please bibliophiles of all genres. (2/5)

Tags: Penelope Fitzgerald , Emily Mortimer , Isabel Coixet , The Bookshop
Support Feminist Media! During these troubling political times, independent feminist media is more vital than ever. If our bold, uncensored reporting on women’s issues is important to you, please consider making a donation of $5, $25, $50, or whatever you can afford, to protect and sustain BUST.com. Thanks so much—we can’t spell BUST without U.