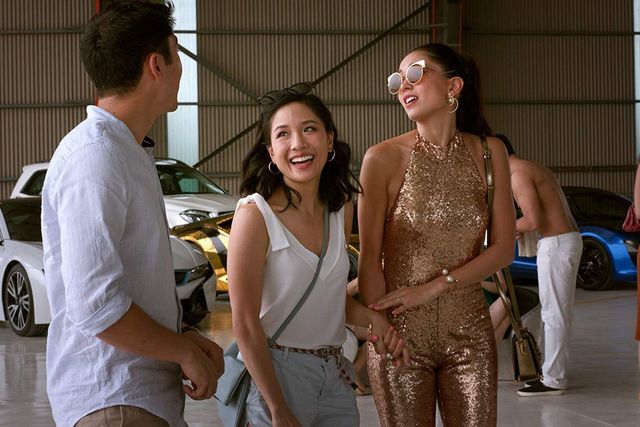 Crazy Rich Asians, out now, directed by John M. Chu and based on the novel by Kevin Kwan, stars Fresh Off the Boat's tremendous Constance Wu as NYU economics professor Rachel Chu and the delightfully charismatic Henry Golding as her dashing boyfriend, Nick Young, who is the secret (at least to Rachel) heir to his family's Singapore luxury real estate fortune. Nick invites Rachel to Singapore for his best friend Colin's wedding, and Rachel discovers that her handsome boyfriend is in fact a household name in his native country. The movie is more than just your typical rom-com fare. It's the first major Hollywood-produced film featuring an entirely Asian and Asian-American cast since The Joy Luck Club, which debuted 25 years ago. The movie itself is a gorgeous tableau of Singapore and a comedic romp with the young men and women in Nick's family who live extremely opulent lifestyles.

The cast is tremendous, even actors with supporting roles, who simply sparkle when they're onscreen, such as glorious queen Awkwafina and funny man Jimmy O. Yang. Wu channels her inner badass and holds her own in scenes with the commanding Michelle Yeoh, who plays Young's mom, the disapproving matriarch who tells Chu that she'll never be good enough for her son.

Sure, Colin's wedding is beyond comprehension. Watching the bride walk in with an actual flowing river at her feet is unlike any other wedding I've ever seen. Sure, Crazy Rich Asians doesn't capture my Asian American experience growing up in America, but it hits all the right notes. First, there's several food porn scenes—the late-night market, Yeoh inspecting food in her kitchen for a party, and a banquet at Chu's college best friend's Peik Lin's (Awkwafina) house—which exemplify what's authentic to Asian culture. We freaking love food. I would be disappointed if the food wasn't also a character. Second, it captures the delicate dynamic between parents and children and the tough love some Asian Americans experience from their parents. Lastly, Crazy Rich Asians is so dang funny. I've seen it multiple times and still laugh and cry at all the same moments. I'm thrilled that a sequel is in the works because we all need a lighthearted and gratifying movie this summer. (5/5)

Jennifer Chen is a Los Angeles-based freelance journalist who writes for Bust, O: The Oprah Magazine, Real Simple, Good Housekeeping, and Brit + Co. Jennifer is raising twin feminists with her TV writer husband and her adopted pug Chewbacca Tofu, and she documents her vegan eating adventures on Instagram @jchenwriter. Follow her at jchenwriter.com and on Twitter @jchenwriter.