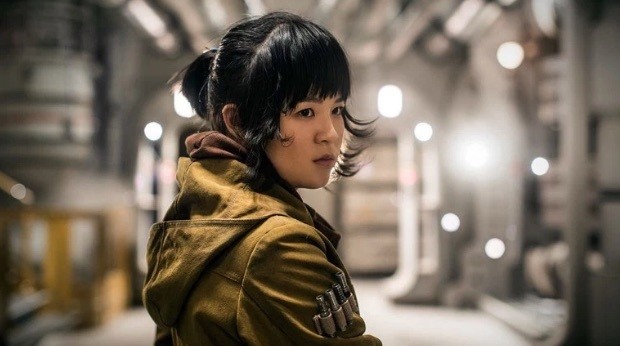 Their words seemed to confirm what growing up as a woman and a person of color already taught me: that I belonged in margins and spaces, valid only as a minor character in their lives and stories. And those words awakened something deep inside me — a feeling I thought I had grown out of. The same feeling I had when at 9, I stopped speaking Vietnamese altogether because I was tired of hearing other kids mock me. Or at 17, when at dinner with my white boyfriend and his family, I ordered a meal in perfect English, to the surprise of the waitress, who exclaimed, “Wow, it’s so cute that you have an exchange student!"

Those experiences reinforced the idea that no matter how great her ambitions or talent, the Vietnamese-American actress would only ever play side characters. She writes:

The same society that taught some people they were heroes, saviors, inheritors of the Manifest Destiny ideal, taught me I existed only in the background of their stories, doing their nails, diagnosing their illnesses, supporting their love interests — and perhaps the most damaging — waiting for them to rescue me. And for a long time, I believed them.

Tran, who is the first woman of color to play a lead role in a Star Wars movie, had a charming and eloquent Instagram presence, where she got real about her own struggles with newfound fame and self-love. People loved it so much that BuzzFeed actually wrote an article called “We Must Protect Kelly Tran And Her Instagram Account At All Costs.”

But that was before the racist and sexist hate that Tran received became too much. People used their apparent love for Star Wars as an excuse to spout hate. Militant fans insisted that there was no place for an Asian woman hero in the Star Wars franchise, echoing the cruel harassment that forced Leslie Jones off social media in 2016, when online trolls said that the Black actress had no place in a reboot of Ghostbusters.

Their comments sent Tran “down a spiral of self-hate.” She writes, “I started blaming myself. I thought, ‘Oh, maybe if I was thinner’ or ‘Maybe if I grow out my hair’ and, worst of all, ‘Maybe if I wasn’t Asian.’” But after struggling with her own self image for so long, Tran realized she had been lied to.

I had been brainwashed into believing that my existence was limited to the boundaries of another person’s approval. I had been tricked into thinking that my body was not my own, that I was beautiful only if someone else believed it, regardless of my own opinion. I had been told and retold this by everyone: by the media, by Hollywood, by companies that profited from my insecurities, manipulating me so that I would buy their clothes, their makeup, their shoes, in order to fill a void that was perpetuated by them in the first place. Yes, I have been lied to. We all have.

Tran connects her experience to what people of color and women face daily in our society:

Tran isn’t alone in working towards that world—her fellow Star Wars actors showed their support and love for her, as did her fan, who started #FanArtForRose to celebrate Tran and her character, Rose Tico. 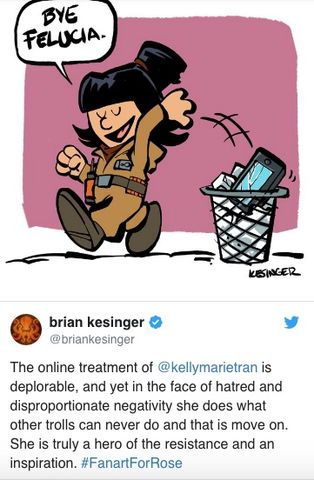 Tran finishes her letter, “You might know me as Kelly. I am the first woman of color to have a leading role in a Star Wars movie. I am the first Asian woman to appear on the cover of Vanity Fair. My real name is Loan. And I am just getting started.”

How "Star Wars" Is About Toxic Masculinity

Tags: kelly marie tran , star wars , the last jedi , harassment , instagram , social media , trolls , racism , sexism
Support Feminist Media!
During these troubling political times, independent feminist media is more vital than ever. If our bold, uncensored reporting on women’s issues is important to you, please consider making a donation of $5, $25, $50, or whatever you can afford, to protect and sustain BUST.com.
Thanks so much—we can’t spell BUST without U.