To All the Boys I've Loved Before is fulfilling all of our rom com dreams right now, giving us a film that is swoonworthy and adorable. Based on the bestselling novel of the same name by Jenny Han, the film revolves around Lara Jean, a shy high schooler who dreams deeply but rarely acts on her feelings. When her secret love letters to her crushes get sent out without her knowledge, she is confronted with her emotions head on and takes a leap from her daydreams to reality. I talked to director Susan Johnson about what she thinks makes this story so special.

What were some of the things you had in mind when directing this project?

The first thing was honoring the fanbase for the book. It’s such a vocal, amazing, strong fanbase. I always like to go to the source and figure out what the touchstones are for the audience and for the author so that I can make sure we’re getting those beats right. The other thing that I wanted to make sure we got right was the joy that I feel when I read that book. This is a happy family, with issues obviously, but they love and respect each other and I think that’s a beautiful place to start when telling a story.

Was trying to do the book justice the most challenging part of this film?

Yes, so I just do a lot of research ahead of time so that once we start shooting I shut it all out. I trust my instincts and hope that I have done the work that I needed to do in order to get there. We borrowed a tiny bit from the second book in order to inform where we could go with the sequel if we needed to, which I hopefully will do, but we’ll see. Filmmaking is very fluid. We just always want to be in the moment and that’s when you get the best performances. The most real experience as a viewer comes from being able to be on your feet and think on the day.

How do you think this project is different from others you’ve worked on?

I think it was different because we had a diverse cast, which was great. I think that’s where all movies need to head, but especially romantic comedies. I also think that there were things that I recognized from my high school experience in this movie which allowed me to be nostalgic when making the movie. So, I think it’s a movie that people who are young will respond to, but also people that are older who can think back to their high school years can relate to. I know that it made me call my high school boyfriend! 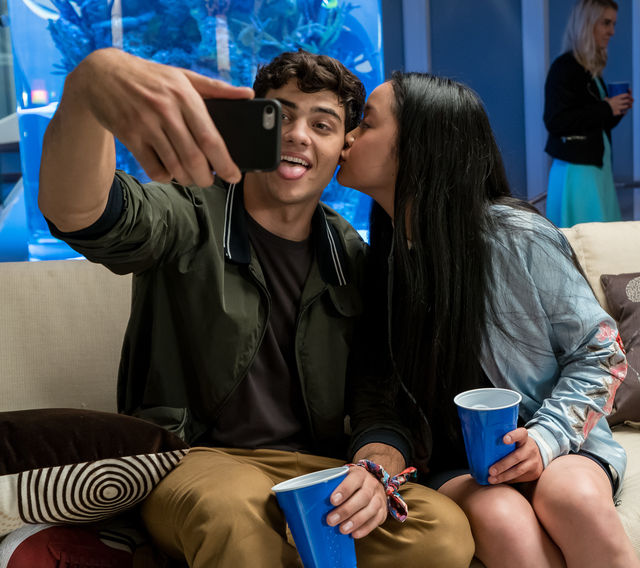 This movie features so many great female characters and has women in roles in its development, with you directing and Sofia Alvarez writing the screenplay. In a time in Hollywood where women are advocating for telling their own stories, what did it mean to you to have this team?

It's pretty great. What was neat to me was seeing Sofia's take on it, Jenny's [Han, who wrote the book] story and her take on the movie version, and then my take on it. We were all a little bit different but also made a concerted effort to come together as one voice. So, it's exciting to watch that happen. Really for me, the excitement was more in the diversity of the cast. I was so excited that Jenny stuck to her guns and said we won't make a movie based on this book if anybody wants to whitewash it. It has to be authentic to the ethnicity of the characters. So for me, every day I was aware of how different that was and it was exciting to be a part of that.

Why do you think that rom coms are coming back again?

I read an article recently with one of our execs on this film and he said that we constantly saw that people were searching for romantic comedies and we just don’t have enough of them to show. So, they were smart to figure out that that’s what the audience is looking for and then start to create that product. I also think there’s something to be said for turmoil in the world and needing to escape. It’s a pretty crazy world out there and it’s nice to just go for 90 minutes and be happy and embrace the beauty and lighter side of life instead of worrying about angst and politics. If you really research romantic comedies, they were big after World War II. Any time there is a tumultuous world Hollywood has been making a product to pull people away from the reality of what can be tragedy, so I think we’re in that place right now.

How do you think that this film is different from other romantic comedies?

I think maybe the family aspect of it, being from a strong family might be a little different. I would say every voice is different. Diversity and inclusion are part of why our story might be a little bit different. In romantic comedies, you want to keep them apart until the very end when you want to pull them together. In this movie it was a little bit tricky because you’re showing a couple pretending to be together while they’re falling in love with each other. So, that was a fine line to walk figuring out how to not give away the fact that they had true feelings but let that chemistry play itself out because it is just so incredible. It’s that way in person and it’s that way on set and it's that way in the characters themselves. We were very lucky that we found actors that could relate to each other on a human level in such a beautiful way and I think that translated onto screen.

Check out To All the Boys I've Loved Before on Netflix!

Photo Credit: Netflix/ To All the Boys I've Loved Before

Tags: Netflix , To All the Boys I've Loved Before , rom com , movie , book