"To All the Boys I've Loved Before" Star Lana Condor On The Return Of The Rom Com: BUST Interview

To All the Boys I’ve Loved Before is Netflix’s newest teen rom com. Based on a bestselling novel by Jenny Han, the story revolves around a girl named Lara Jean who writes letters to her crushes that she never sends—until one day they end up in the mailboxes of every boy she has ever liked. What ensues is a wild ride through high school drama, full of embarrassing moments, family love, and a fake boyfriend. I talked with star Lana Condor about what she thinks makes this film so exciting.

What excited you most when you read the script?

I don’t usually get auditions to be the lead in a rom com, so that was what drew me to the project in the first place because I just felt that it was an opportunity that I just couldn’t pass up. Once I read the book, I loved it. I love Lara Jean. I think her heart is so beautiful. From the very start, all I wanted to do was be in this movie.

It’s very cute how similar your names are!

You should take it as a compliment, you are really just authentically this character.

What do you think that you learned the most from this experience?

It was my first lead, so I learned a lot. I never thought in my wildest dreams I would be a lead in any movie, let alone a rom com. So I think that from the get-go, I learned that I have to take more responsibility on set. As a lead, the tone that you set is the tone for that day so there’s a lot of responsibility that comes from being prepared, positive, happy and light.

What do you hope that people get out of this movie?

Did you feel that you could relate to Lara Jean, other than of course your name?

Absolutely! Lara Jean, she’s just so awkward. She’s just living in the world of being awkward and that is my every day. I feel awkward 24/7. So, I relate to her feeling out of place. In Hollywood you feel out of place all day long. She lives in her own world, which I also do. I think she’s a very relatable character. Who here can say they went to high school and felt like they fit in perfectly?

It was really nice to see the behind-the-scenes side of high school where you’re just hanging out with your family at night.

Oh my god, I never went to parties in high school. Literally just ate food with my parents!

There have been a lot of romantic comedies on Netflix recently. Why do you think that’s been such a big deal this summer?

I think the reason it’s working is because it’s an angry time. There’s a lot of things to be upset about and we don’t realize that we need a relief. It’s refreshing to watch rom coms and take yourself out of today’s current situation because there are a lot of things to be angry about. These rom coms offer an escape and they’re just good, they feel good. 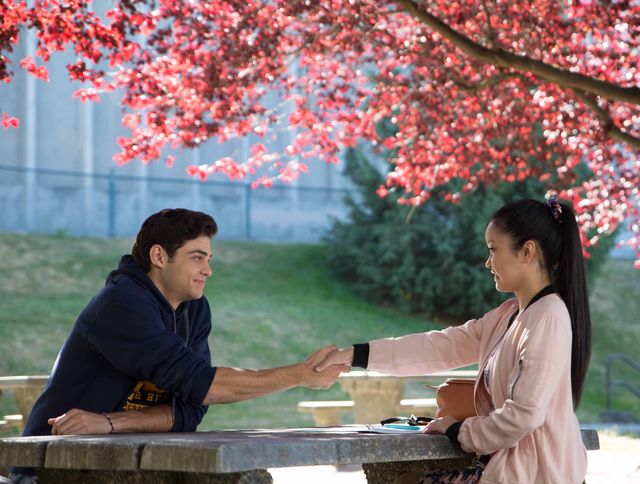 Did you talk about how you were going to translate your characters from the books to the movie?

Jenny [Han, who wrote the novel the movie was based on] was very trusting. I think when we were cast she handed the baton off to us. She of course was very present and she was on set a lot and we were texting all the time. She would give us things that she was like, “Oh, you should play this up more” or “Tone this down a bit.” For example, for me, her biggest note for me was to not forget that Lara Jean is a 16-year-old girl who has zero experience.

It was so refreshing! Susan [Johnson] was my first female director that I ever got to work with. The thing about women is that we’re so emotionally smart. Having that emotional insight so available on set because it was a pretty female driven set was really exciting. Women care so deeply. When we do something, we do it because we care. So, having Susan who cares so deeply about the project, Jenny who cares so deeply about the project, all these women, it made going to work exciting because you felt like you were a part of something. I hope I get to work with more women in positions of power and I think we’re going to get there.

The director, Susan Johnson, said that one of the things that excited her most about this film was the diversity of the cast. Was that a big part for you as well?

Of course! That’s one of the things I’m excited about, but it’s not the thing. I’m most excited to normalize and not to stereotype. Lara Jean is written as your average girl next door, she’s not written as your Asian nerdy computer person who does homework. I’m most excited for the audience to see that we don’t have to write women of color as stereotypes, we can just write them as normal girls, because that’s what we are.

Check out To All the Boys I've Loved Before on Netflix.

Photos: Netflix/ To All the Boys I've Loved Before

For The First Time Since 1958, The Top Three Highest-Grossing Films Of The Year Starred Women