“BlacKkKlansman” Draws A Direct Line From The KKK To Trump 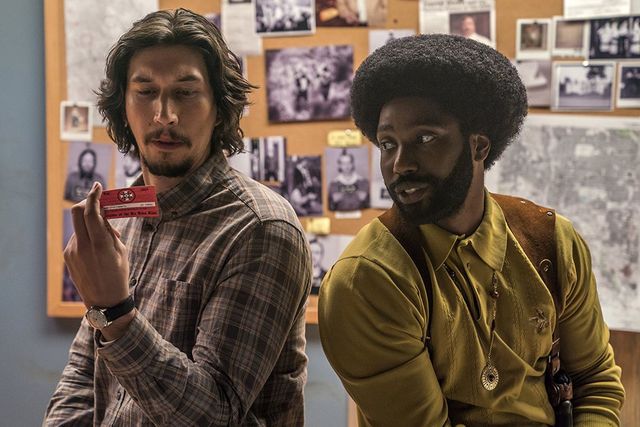 If you follow movies at all, by now you’ve likely seen a trailer for BlacKkKlansman. The movie is directed and co-written by Spike Lee and produced by Jordan Peele, who Lee says approached him with the idea for the film. Based on the memoir by Ron Stallworth, BlacKkKlansman tells the true story of a black undercover detective (Stallworth, played by John David Washington) who successfully infiltrated the Ku Klux Klan in 1970s Colorado Springs. How? Stallworth’s white coworker—here a Jewish cop named Flip Zimmerman, played by Adam Driver—pretended to be him for face-to-face meetings with KKK members, while Stallworth put on a “white voice” and built a relationship with various KKK members, including David Duke (Topher Grace), over the phone. The movie is smart, funny, and insightful—and it’s the most explicitly anti-Trump movie that i've seen yet.

Throughout the movie, several lines of dialogue refer to Trump—at one point, Stallworth says, "America would never elect someone like David Duke,” eliciting too-real groans from the audience at the press screening I attended earlier this week. There are multiple references to “making America great again” and “America first." In one powerful scene, activist Jermone Turner (Harry Belafonte) visits the local Black Student Union (whose president Patrice Dumas, played by Laura Harrier, is dating Stallworth). He tells the students the true story of the lynching and murder of a black teenager named Jesse Washington in 1916. Lee contrasts this scene with the initiation of the new KKK members. That initiation includes a viewing of Birth of a Nation, with dialogue telling the audience how its 1915 release sparked the growth of the KKK, and that it was shown in the White House. Along with Birth of A Nation footage, Lee also incorporates footage from Gone with the Wind in the movie’s opening scenes. With these references, Lee shows how little has changed from the Civil War to 1916 to the 1970s to 2018.

And those scenes aren't the only ways that Lee references the way racism and white supremacy looks in 2018. There’s a white woman character named Connie (Ashlie Atkinson) who is the wife of a KKK member; watching her support her husband and gleefully plan to enact a violent hate crime against Patrice, the statistic that 53% of white women voted for Trump kept flashing in my mind. We see some of Stallworth’s white coworkers enact police brutality against black citizens, including Patrice, and the past murder of a black teenager by a white cop is referred to in language that evokes the Black Lives Matter movement.

Lee makes the connection between the KKK and Trump even more explicit in the movie’s final scene, which begins by showing a KKK cross burning. The cross burning transitions into real documentary footage showing David Duke endorsing Trump; neo-Nazis marching with tiki torches in Charlottesville; Trump describing the Charlottesville neo-Nazis and counterprotestors as deserving “blame on both sides”; and the murder of white counterprotestor Heather Heyer. The final shot is a photograph of Heyer; the movie comes out on the one-year anniversary of Charlottesville.

In a recent appearace on the Tonight Show, Lee said that he doesn't see BlacKkKlansman as a period piece. "We knew that this film was going to have to connect, we did not want it to be a period piece ... [given] this crazy guy in the White House," he said. "I think the urgency that you felt is what I feel being in America today."

BlacKkKlansman is out now. See it.