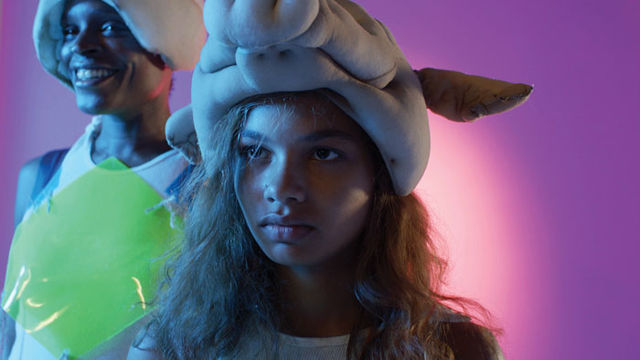 In Madeline’s Madeline, the main character’s first words aren’t, strictly, words—they’re meows. Sixteen-year-old Madeline (Helena Howard) is the youngest performer in an immersive theater troupe, and she spends much of her time, both in rehearsal and at home with her overprotective mother Regina (Miranda July), pretending to be animals.

Madeline’s Madeline is a strange and often disorienting experimental film, with frequent, extreme close-ups and sound mixing that often makes dialogue seem far away or underwater. These choices reflect Madeline’s mental state—she has an unspecified mental illness and recently spent time in a psych ward. Madeline fascinates her theater director, Evangeline (Molly Parker), who decides to design a performance around Madeline’s complicated relationship with her mother. But though Evangeline’s older students are concerned that Evangeline is taking advantage of an unstable teen, Madeline flourishes under Evangeline’s attention—until she doesn't.

The acting here is strong, particularly from Helena Howard—it’s hard to believe this is her debut. As a movie, Madeline’s Madeline is unlike anything else—but if you’re able to accept the strangeness of scenes such as one showing Madeline dressed as a turtle shimmying towards the ocean, you’ll see an effective and unusual character study that will stay with you. 4/5

Tags: Madeline's Madeline , movie , Josephine Decker , Helena Howard , movie review
Support Feminist Media!
During these troubling political times, independent feminist media is more vital than ever. If our bold, uncensored reporting on women’s issues is important to you, please consider making a donation of $5, $25, $50, or whatever you can afford, to protect and sustain BUST.com.
Thanks so much—we can’t spell BUST without U.