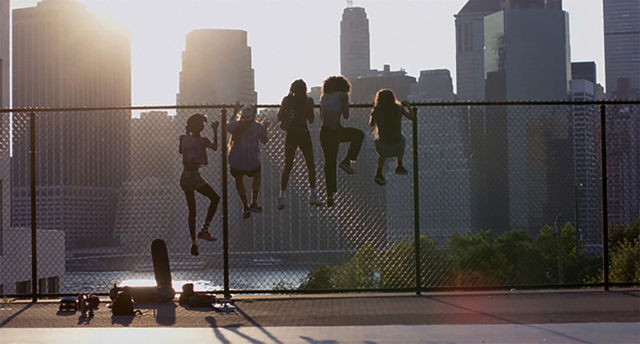 Rachelle Vinberg stars as Camille, an 18-year-old who lives in Long Island and loves to skateboard—but after she gets "credit carded"—falls crotch-first on her skateboard—and needs stitches, her mother (Orange Is The New Black actress Elizabeth Rodriguez) bans her from skateboarding. Of course, Camille doesn’t give up that easily. While her mother is at work, Camille takes the train into New York City to meet up with the all-girl skate crew she found on Instagram. Though the girls—all New Yorkers—are an outspoken and close-knit group, they instantly accept shy, lonely Camille. But Camille finds trouble within her new crew when she develops a crush on leader Janay (Ardelia Lovelace)’s ex-boyfriend, fellow skateboarder Devon (Jaden Smith).

Skate Kitchen is both a touching story about female friendship and a way to feature some incredible athletes. But although Vinberg is a talented actor, several of the supporting characters hint at stories that would be far more interesting than the familiar “naive teenager moves to New York City” narrative. 4/5