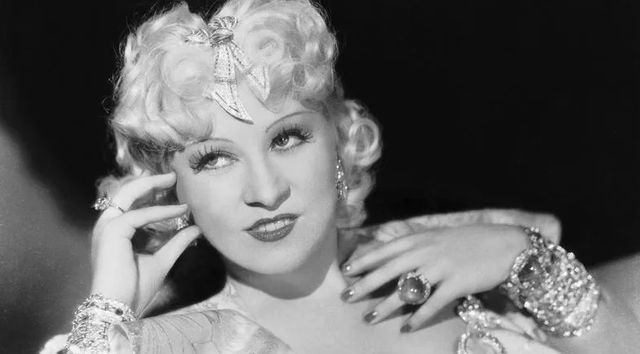 Mae West was arrested for—what else–sex. BUT not the sex you’re thinking about…Sex, the play.

You see, long before Mae West was lighting up Hollywood with her trademark heavy innuendo, she was in New York, trapped in a brutal battle with the law, fighting to promote equality, freedom of speech and, of course, sex.

So let’s jump into the arrest, incarceration, and surprising rebirth of Mae West: 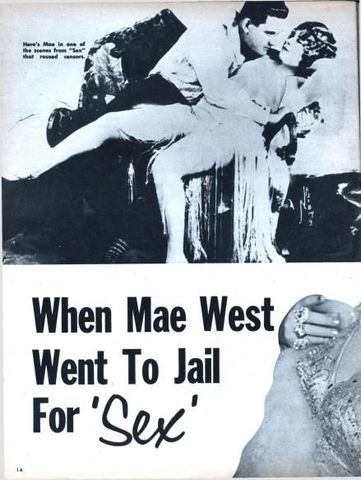 By the 1920s, Mae West was a theatrical veteran. Now in her thirties, she’d trod boards across New York, learning her craft from burlesque acts, musicians, dramatic actors, and everyone in between.

Yet though her name was known, Mae had never actually had a big break. As she delved further into the years after the big 3-0, younger models started taking what, until then, had always been Mae’s roles. It was starting to look like her dream of a big break was never going to happen.

But Mae West wasn’t the kind of woman that would go down without a fight. So she decided to make her own big break.

Mae started writing plays, and after knocking out a couple of practice pieces under the pseudonym Jane Mast, she wrote what she knew would be her ticket to the big time. This being Mae West, the play was—of course—titled:

Sex follows the ups and downs of sex worker, Margy LaMont. When writing her, Mae West was adamant that Margy would be totally different from other sex workers that had previously been portrayed onstage.

Margy is funny, likeable, and smart as hell; more importantly, at no point in the play does she need saving, nor does she repent. Instead, she pushes back against the idea that her work as a sex worker somehow makes her "lesser."

Naturally, there was only one actress Mae West had in mind for this plum part: Mae West.

Because, you know, subtlety. 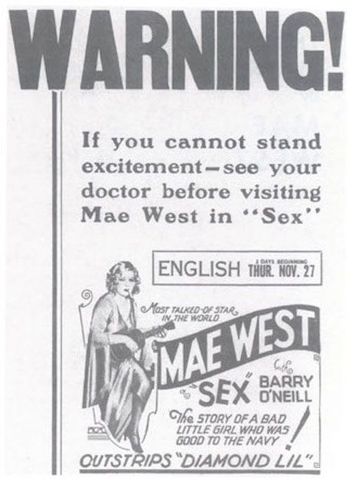 A late-run poster for Sex

Sadly for Mae, Sex was not met with favorable reviews.

Not only was the show's subject seen as obscenity of the highest order, the show's star made things worse by adding race into the mix.

Mae West had insisted that Sex include what was then known as "black music." This, combined with the show's scandalous stance on gender and sexuality, was just too much. And Sex soon proved the perfect breeding ground for a powder keg of riotous fury.

But nothing seemed able to stop Sex. Despite the constant bad press, audiences kept coming. In a year where New York’s other big plays included work by the likes of Noel Coward, it was Mae West's little Sex engine-that-could that outlasted them all.

Sex wasn’t the only show Mae was running. Inspired by her friends, many of whom were LGBTQ+ and often forced to keep their sexuality and relationships hidden, Mae wrote her next play, Drag.

Drag’s hero, Rolly Kingsbury, is a closeted man who is stuck in a loveless marriage and has to put up with arguably the worst family in the world. His dad is a homophobic judge, and his father-in-law is a conversion therapy pioneer (I told you they were the worst family eve!r).

Drag looks at Rolly’s use of his wife as a "beard," his secret relationships with men, and his family’s horror that Rolly could ever be one of"them."

Oh, and the whole thing ends in a HUGE drag ball before *spoiler* Rolly is killed, which his dad (a judge, remember) covers up as a suicide, for fear of having Rolly’s sexuality discovered and the family’s honor tainted by homosexuality.

Yeah. I think we can all agree that this play was just a tad controversial for the 1920s (*cough* understatement of the year *cough*).

Thank God, Drag gets semi-regular reprisals, because it sounds like an amazing ride that I need to get on!

But the plot wasn’t enough for Mae. You see, with Drag, Mae wanted to do something never done before. She wanted to cast LGBTQ+ actors.

This was theatrical treason.

You see, allowing anyone on the LGBTQ+ spectrum to perform on stage was actually banned by the actors' union at this time.

But you know by now that a little thing like that wasn’t going to stop Mae.

So she set up open auditions in a gay bar in Greenwich Village, ensuring she got the cast she wanted and casually going against every rule in the book to do so.

Drag opened out of town in January 1927 to packed houses ...until it was shut down after two weeks.

After Drag, the Society for the Prevention of Vice and other groups against obscenity were out for Mae’s blood.

First, a play on sex workers and freedom of sexuality, AND THEN a play that promoted open homosexuality?!?!? It simply wouldn’t stand, Mae West and her corrupting plays HAD TO GO!

The axe fell in February 1927, just one month after Drag debuted. The police stormed Sex, carrying out a mass arrest of Mae and her company before completely shutting the play down.

BUT those that thought arresting Mae West on obscenity charges and the threat of prison time would put an end to her were about to be proved veeeery wrong.

Mae decided that her arrest was going to be her making.

So she rocked up to court in the most amazing outfits, gave every interview going, wrote articles, signed autographs and made sure everything she said and did in court got headlines.

At one point the judge point blank asked Mae. "Miss West, are you trying to show contempt for this court?"

To which she innocently responded, "On the contrary, your Honor, I was doin’ my best to conceal it." 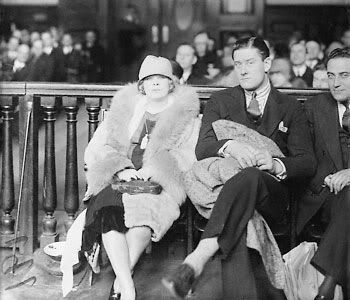 Mae during her Sex trial, just casually wearing a stoll to court

After successfully turning her arrest and subsequent trial into one long press call, Mae was sentenced to ten days in prison. So naturally Mae transformed what had been a press call into a press tour.

Once inside and behind bars, Mae made herself comfy. She befriended the other inmates, as well as the staff, even dining with the warden and his wife.

Of course, she leaked all of this to the press, including the little tidbit that she ensured that under her prison uniform she wore the finest silk underwear.

Mae also took the opportunity to highlight how shitty the treatment of New York’s women prisoners were. Keen to make it clear that though she was dining with the warden, everyone else was treated like dirt. After she was released, she put money where her mouth was, donating to actually help make things better inside.

Throughout, Mae continued to hustle, transforming what should have been her downfall into her long-sought-after big break. Seriously, I cannot understate how much she was smashing this! Bitch was taking busted-up lemons and turning them into champagne!

By the time Mae West walked out of those prison gates, she was an American icon.

Moral of the story thus far–do not try to mess with the West!

Pretty much as soon as her days in the jailhouse were over, Mae was back at work, creating a new play.

The Pleasure Man was essentially a re-do of Drag. However, in an effort to prevent another shut-down, Mae turned the show's lead into a straight guy…though she made sure that the show's epic drag ball remained.

The play had its Broadway debut on October 1, 1928. As soon as the curtain fell, the entire cast was arrested.

Despite the arrest of the entire cast, a matinee performance was allowed the next day. Once more the police flooded the theater. One of the drag queens performing managing to squeeze in a speech on police oppression before the arrests started up again.

As the cast was dragged away, the police were met with a wave of boos from a crowd that had formed outside the theatre. 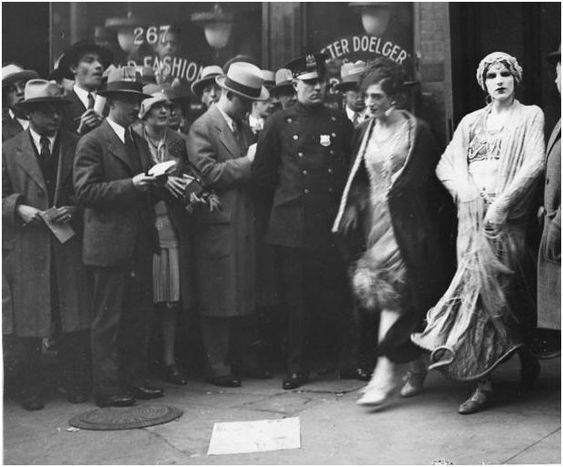 Two members of The Pleasure Man cast during their arrest

At The Pleasure Man trial, Mae and her cast were accused of:

"unlawfully, wickedly and scandalously, for lucre and gain, produce, present and exhibit and display the said exhibition, show and entertainment to the sight and view of divers and many people, all to the great offence of public decency."

Mae West defended her work to the end, eventually seeing the charges dropped. However, the fight had cost Mae $60,000 (that’s just under  one million dollars today!). 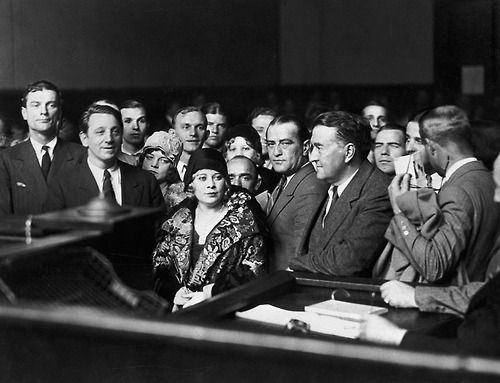 Mae West with some of The Pleasure Man company

By 1930, the trials were over and Mae West had turned to Hollywood. Thanks to her constant work, she was now one of the most in-demand actors in the world.

Mae West would become one of cinema's longest-standing icons, known for her heavily innuendo-laced jokes, as much as she was her business smarts, even becoming one of America’s highest earning individuals.

But Mae’s fight for equality and for taboos to be dropped has been forgotten. And that’s a damn shame, because as Mae West would say:

"Those who are easily shocked should be shocked more often."

This was interesting, where can I find out more? You should definitely read Mae’s plays! Sex, Drag and The Pleasure Man are all in print and as the plays are still performed, you might even be able to find a performance near you (let us know if you do!!!).

Tags: Mae West , arrest , 1920s , LGBT , sex , play , theatre , jail
Support Feminist Media!
During these troubling political times, independent feminist media is more vital than ever. If our bold, uncensored reporting on women’s issues is important to you, please consider making a donation of $5, $25, $50, or whatever you can afford, to protect and sustain BUST.com.
Thanks so much—we can’t spell BUST without U.