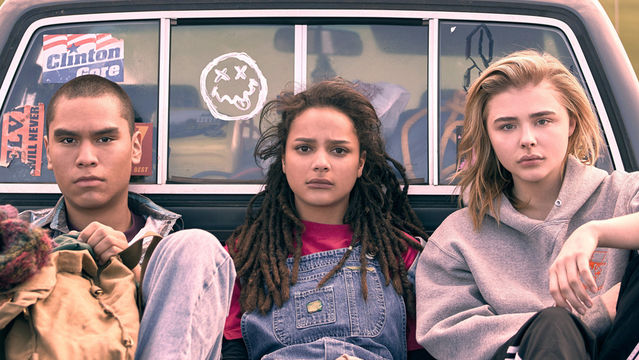 The Miseducation of Cameron Post takes us back to the early ‘90s, when the Breeders were making music, cool kids wore overalls, and conversion therapy was on the rise. The movie is based on a young adult novel by Emily M. Danforth and is co-written and directed by Desiree Akhavan, who told another queer coming-of-age story in the semi-autobiographical Appropriate Behavior. Here, Chloë Grace Moretz stars as Cameron, a teen who gets caught having sex with her female best friend Coley (Quinn Shepherd) at prom and is promptly sent away to a gay conversion therapy camp called God’s Promise by her conservative Christian guardian. God’s Promise is run by the earnest Reverend Rick Marsh (John Gallagher, Jr.), a conversion “success” case himself, and his terrifying sister, Dr. Lydia Marsh (Jennifer Ehle), who attempts to brainwash the teens into believing that their “same-sex attraction” isn’t real. Though shaken by the camp’s strict rules and Dr. Lydia’s lectures, Cameron finds strength and support in two new friends, Jane Fonda (Sasha Lane), a cool stoner who hides weed in her prosthetic leg, and Adam Red Eagle (Forrest Goodluck), a sensitive, thoughtful Native American teen who is Two-Spirit.

Akhavan evokes ‘90s nostalgia with the film’s music, fashion, and pop culture references, and embraces humor with Jane’s blasé sarcasm and evangelical absurdities like the “Blessercize” workout videos. She also makes it clear that “conversion therapy” is just plain abuse. Moretz gives a strong performance and Ehle makes for a frightening villain, but the supporting characters—particularly those played by Lane and Goodluck—would have benefited from more character development and screentime. (4 / 5)