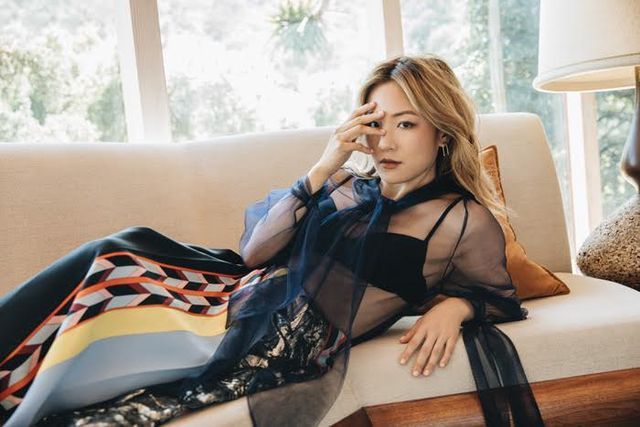 Today, Constance Wu posted a powerful message on Twitter talking about why her new movie, Crazy Rich Asians, means “so much to to so many people.” The movie—out August 15th—is the first Hollywood studio film in 25 years to spotlight an Asian American story. Wu says she never expected to play any role in a studio film, much less star in one, because she had never seen that happen for someone who looked like her. Check out her statement below. 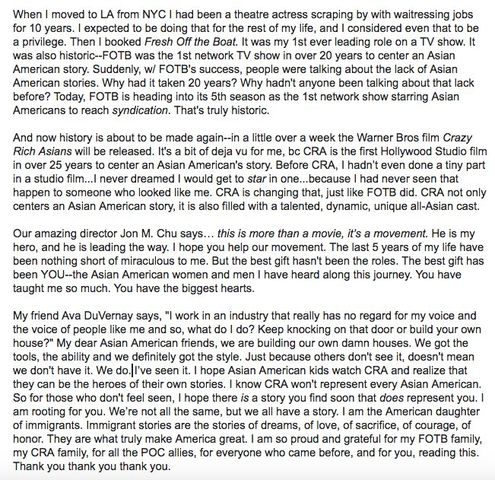 When I moved to LA from NYC I had been a theatre actress scraping by with waitressing jobs for 10 years. I expect to be doing that for the rest of my life, and I considered even that to be a privilege. Then I booked Fresh Off the Boat. It was my 1st ever leading role on a TV show. It was also historic—FOTB was the 1st network TV show in over 20 years to center an Asian American story. Suddenly, w/ FOTB’s success, people were talking about the lack of Asian American stories. Why had it taken 20 years? Why hasn’t anyone been talking about that lack before? Today, FOTB is heading into its 5th season as the 1st network show starring Asian Americans to reach syndication. That’s truly historic.

And now history is about to be made again—in a little over a week* the Warner Bros film Crazy Rich Asians will be released. It’s a bit of deja vu for me, bc CRA is the first Hollywood Studio film in over 25 years to center an Asian American’s story. Before CRA, I hadn’t even done a tiny part in a studio film...I never dreamed I would get to star in one...because I had never seen that happen to someone who looked like me. CRA is changing that, just like FOTB did. CRA not only centers an Asian American story, it is also filled with a talented, dynamic, unique all-Asian cast.

My friend Ava DuVernay says, "I work in an industry that really has no regard for my voice and the voice of people like me and so, what do I do? Keep knocking on that door or build your own house?" My dear Asian American friends, we are building our own damn houses. We got the tools, the ability and we definitely got the style. Just because others don't see it, doesn't mean we don't have it. We do. I've seen it. I hope Asian American kids watch CRA and realize that they can be heroes of their own stories. I know CRA won't represent every Asian American. So for those who don't feel seen, I hope there is a story you find soon that does represent you. I am rooting for you. We're not all the same, but we all have a story. I am the American daughter of immigrants. Immigrant stories are the stories of dreams, of love, of sacrifice, of courage, of honor. They are what truly make America great. I am so proud and grateful for my FOTB family, my CRA family, for all my POC allies, for everyone who came before, and for you, reading this. Thank you thank you thank you.

Constance Wu spoke more about the vital importance of representation in her conversation with Jennifer Chen for BUST’s August/September cover story, saying, “In the past 20 years on TV, Asians played roles that could be played by anyone. Some people think that’s good that you're not playing a stereotype. I think that’s just diversity as checking a box. I’m more interested in representation, which is highlighting what makes an Asian American different than a white American or a black American.”

Check out our August/September issue to read Constance’s thoughts on feminism, navigating Hollywood as an Asian American woman, her adorable bunny, and more. We can’t wait to watch Crazy Rich Asians when it comes out on August 15th, and cheer on Constance in the leading role she truly deserves.