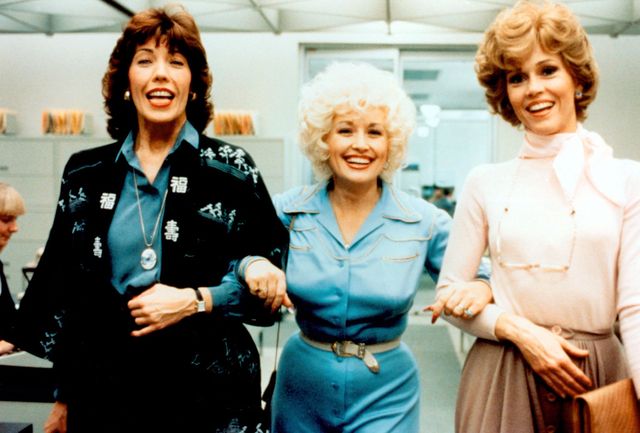 A long-awaited sequel to the hit 1980 comedy 9 to 5 is in the works. At the Television Critics Association panel for her new HBO documentary, Jane Fonda confirmed that she, Lily Tomlin, and Dolly Parton will be returning to the big screen to reprise their original roles, reports Entertainment Weekly. The classic movie followed the three overworked and underpaid women in a madcap plot for revenge on their sexist boss, and it's the 20th highest-grossing comedy movie of all time.

The story was conceptualized by Jane Fonda and made through her production company, IPC. According to a 1981 interview with Lifestyle magazine, Fonda did a great deal of research on the lives of working women, particularly those who entered the workforce later in life following a husband's death or divorce. "What I found was that secretaries know the work they do is important, is skilled, but they also know they're not treated with respect. They call themselves 'office wives.' They have to put gas in the boss's car, get his coffee, buy the presents for his wife and mistress," she said. "So when we came to do the film, we said to Colin [Higgins], OK, what you have to do is write a screenplay which shows you can run an office without a boss, but you can't run an office without the secretaries."

As if that wasn’t enough female badassery, Jane Fonda is no executive producing the movie's sequel, and the multitalented Rashida Jones will be co-writing the script with the original screenwriter, Patricia Resnick. They hope to make a story that tackles the work issues of 2018, including the wage gap, sexual harassment in the workplace, shifting technology, and outsourcing.

Dolly Parton also weighed in on on the storyline in a recent interview with ABC's Nightline, stating that with the current conversations around unequal pay and sexual harassment in the workplace, a sequel makes sense, and feels right to her and the other stars in a way it hadn’t before.

The three stars have all shown their support for feminist issues throughout their stellar careers. Dolly Parton, who grew up in poverty before becoming a country music superstar, has been hailed as a feminist pioneer and hero for working-class women.

Lily Tomlin is outspoken about social issues, and has made history as an openly gay actress. Jane Fonda, too, has talked about her long journey to unlearning internalized sexism. Today, she is an outspoken advocate for women’s issues. Fonda and Tomlin also take on feminist issues on their highly successful Netflix show, Grace and Frankie.

We can’t wait to watch these women’s workplace commentary—and real-life friendship—shine on screen.

Tags: Jane Fonda , Dolly Parton , Lily Tomlin , 9 to 5 , movies , movie news
Support Feminist Media!
During these troubling political times, independent feminist media is more vital than ever. If our bold, uncensored reporting on women’s issues is important to you, please consider making a donation of $5, $25, $50, or whatever you can afford, to protect and sustain BUST.com.
Thanks so much—we can’t spell BUST without U.