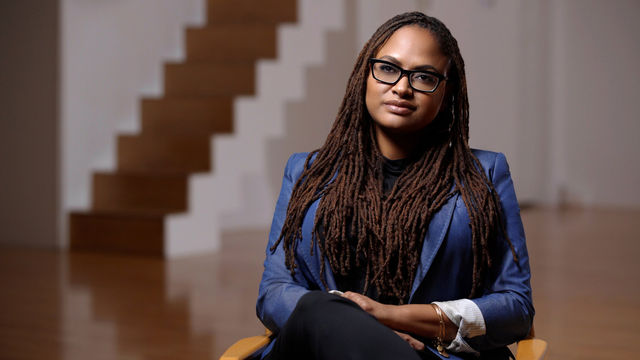 At Cannes Film Festival 2017, Jessica Chastain, who served on the main jury, made an impassioned speech about the disturbing portrayal of women in film. This clip opens Amy Adrion’s documentary, Half the Picture, setting the scene for the director to investigate the last few decades in the film industry. “I thought it was a strong way to open the film because she states the problem and she states why it matters within a minute,” Adrion tells BUST. “She’s a big movie star, and Cannes is big movie platform for mass market and highbrow entertainment. It’s interesting to see how she expresses herself. You can see how uncomfortable she is, and you can see how uncomfortable the people surrounding her are. I think that emotionality in how she delivers it also gives you a sense of what is at stake for her professionally, and how difficult it is to speak out in these rooms of power. I admire her so much.”

This year at Cannes Film Fetival, 82 women—including Agnés Varda, Jane Fonda, Salma Hayek and Ava DuVernay—took to the red carpet and stood in solidarity to protest gender disparity in the industry. The number 82 was chosen to represent the number of films directed by women that have played in Cannes' Palme D'Or competition over the festival's 71-year history, compared to 1,645 films directed by men. This writer watched Half the Picture at Sundance London, where the film took home a special #WhatNext award; the festival placed an emphasis on inclusion, with 58% of the main features directed by women.

Across the board in the film industry, gender bias and lack of opportunity for women is, to put it frankly, a disgrace. In fact, recently the Equal Employment Opportunity Commission investigated charges that the Hollywood studio system engages in systemic discrimination. Adrion’s documentary explores the inherent sexism in the industry by talking to women and allowing them to tell their stories.

The personal experiences of the filmmakers cover topics such as the impetus to make their first movie, the difficult second film, how finding funding is scarce, motherhood, hostile work environments, and harassment. The result is a documentary that's fascinating, empowering and heartbreaking to watch. Half the Picture gives a real sense of what has been lost by shutting out women, but also celebrates women's hard work and achievements. “All the women in the film have had a tough road," says Adrion. “When they were starting out, getting their first breaks, getting their films financed, once they made their films, getting them distributed, getting their films reviewed. They all encountered those challenges.”

Conversations with Ava DuVernay cement her reputation as a woman of action and an astute problem-solver. Her experience taught her that to get work in television and directing, you need at least one notch on your CV, but women are often not afforded this opportunity. DuVernay exclusively only hires women to direct episodes of her TV show Queen Sugar, and this brand of activism has made it possible for those women to get more work. Does this kind of action signify a real change in the industry? Adrion hopes so, saying, “I think you can’t look at this moment and not feel like it’s different from these kind of moments in the past. I think part of that change is in women really understanding the strength in when we work and stand together. This whole idea of one woman being the exception is now an old idea. It’s only easier for all of us when there’s more women’s voices in the room. We’re seeing that throughout entertainment with actresses and women directors supporting each other, rather than this idea of competition among women which was always complete bullshit and didn’t serve women in any way.”

But I’m a Cheerleader director Jamie Babbit talks about how her film was received and the startling gender imbalance in film criticism. There is a very small percentage of women critics on Rotten Tomatoes, something that all-female review aggregator CherryPicks aims to address this fall. Its goal is to elevate women’s voices in critical discourse and it has the potential to highlight what kind of films or entertainment women are rarely asked to comment on. “I think CherryPicks is a really smart, subversive way to highlight women’s voices in criticism," says Adrion. “I think it’s a great initiative that addresses a current problem. With so many of these things hopefully we will reach a place where we don’t need it anymore but clearly we need it right now. 73% of top critics are men, it’s largely men who run the most influential film festivals and who still run studios and production companies. I think women are being really creative in ways to address that. Things like CherryPicks, the Free the Bid movement [which advocates for women directors to get equal opportunity to bid on commercial projects], actresses speaking up about pay inequity—all of these things are addressing this situation.”

The condescending attitude towards women directors is a topic that has affected Patricia Riggen, who was constantly undermined by a male employee when she was shooting The 33. One of the most galling stories in the documentary is told by Brenda Chapman, who was kicked off Brave—a film about how young women need to rebel and forge their own path. When the film gained awards traction, leading to an Oscar win for Best Animated Feature Film, Chapman was told she could go on stage to collect the award but that she must stay silent. She didn’t obey, and in a stirring act of defiance, dedicated the award to her daughter who inspired the film.

With the current rebellious climate and the #MeToo and #TimesUp movement, women are marking considerable change. We're not putting up with this shit anymore. Adrion’s documentary acts as an essential and passionate handbook for any woman working in the film industry, or striving to join it.

Half the Picture is out now in the US and will be released on VOD on July 10.

top photo: Ava DuVernay in a still from Half the Picture

Where Are All The Women In Film?

Katherine McLaughlin is a writer, reviewer and columnist for Broadly, Little White Lies, The List, SciFiNow and HorrorVille. She also co-hosts UK horror podcast Casting the Runes. You can find Katherine on Twitter @coconutboots.

Tags: Half the Picture , documentary , movies , movie review , Amy Adiron , Ava DuVernay , women in film
Support Feminist Media!
During these troubling political times, independent feminist media is more vital than ever. If our bold, uncensored reporting on women’s issues is important to you, please consider making a donation of $5, $25, $50, or whatever you can afford, to protect and sustain BUST.com.
Thanks so much—we can’t spell BUST without U.