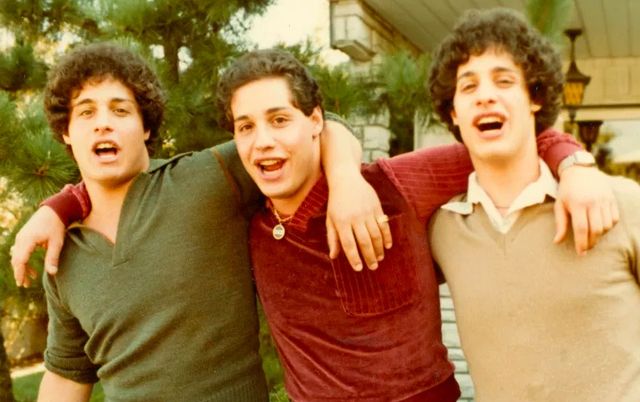 The new documentary Three Identical Strangers begins by recalling a heartwarming media story that was “viral before there was viral”: In 1980, 19-year-old Bobby went to his first day at Sullivan County Community College and encountered countless people greeting him as “Eddy”—girls even kissed him on the lips. And then someone filled him in: Bobby looked EXACTLY ALIKE this Eddy. Bobby called Eddy and found out that they shared the same birthday and were both adopted from the same adoption agency: Louise Wise. They were twins—or so they thought—separated as newborns.

As Bobby and Eddy’s story started to get media attention, 19-year-old David’s friends and family saw newspaper photos of Bobby and Eddy and recognized their faces. Sure enough, David also shared a birthday and an adoption agency with Bobby and Eddy. They weren’t twins—they were triplets.

But beneath the heartwarming story is another, much more disturbing, one. Because David, Bobby and Eddy’s separation wasn’t an accident. The triplets were separated as part of a psychological study designed to figure out the answer to “nature vs. nurture.” When identical twins or triplets were placed for adoption with Louise Wise Services—a prominent adoption agency in New York—the agency separated them without telling the biological or adoptive parents, and made sure the siblings were raised in families of different classes so the effects could be studied.

Director Tim Wardle digs into the story of the twin and triplet studies, interviewing identical twins who were separated as part of the study, researchers involved with it, a journalist who covered the study, and family members of Bobby, Eddy and David. Most of the research records are sealed, but it’s clear that more identical siblings were separated than we know of. Wardle also explores the effect that growing up apart from each other had on Bobby, Eddy and David’s mental health. The triplets were quick to point out superficial similarities to the media—they smoked the same brand of cigarettes, they’d all wrestled in high school, they all liked older women—but they also had a shared history of depression. And Eddy, who was raised in a working class family with a strict father, struggled with depression more than Bobby and David did.

Three Identical Strangers shows the fascinating true story behind a 1980s media sensation, bringing up questions of ethics in psychological research and the nature vs. nurture debate.

"Leave No Trace" Is A Harrowing Yet Delicate Drama