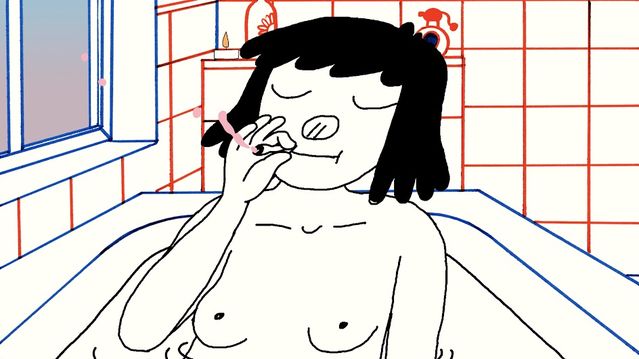 On a balmy Saturday evening in Columbus, Ohio, the ninth edition of animation screening series Malt Adult is being exhibited at Corrugate Studio Collective & Gallery. The location is a far cry from the indoor humidity of local galleries during the summer. In fact, this event is being held outside, with viewers seated in the parking lot, cushioned with large blankets and the aroma of smoked hot dogs cascading in the air. Animations are set to be projected on the studio’s wall facing the audience, as attendees ruffle through pages of the event’s accompanying cartoon zine. During intermission, series creator and Columbus College of Art & Design animation graduate Sarah Schmidt chats about her initial stages of the bimonthly series and deciding upon LGBTQ and ally animators, just in time for Pride Month.

“I kept going to animation festivals, [though it was] less about cartoons and more about artwork,” Sarah says of starting Malt Adult. “I wanted to bring that home to show a lot of my fine arts friends, instead of just sending them a link. I thought it’d be a good excuse to bring everyone together.” Attending various festivals throughout the country, Sarah gathered information on animators online and the artists they also follow, creating what she calls “an endless feed." After researching artists herself, Sarah contacted them to build and preserve relationships.

Instead of holding a fully humorous animation series, Sarah decided to use an alternative method. “It’s expected to be cartoons because it’s animation, but it’s the idea of trying to shift the conversation about animation from, 'oh, it’s goobery cartoons' to 'it can be a lot more than that, it can give you all kinds of emotions, not just funny ones,'" she says.

Sarah also enjoys the fulfillment of conjoining different areas of art into one space, considering the show to be more relaxed than pretentious. “I have all my fun animation friends coming to [Malt Adult] and a lot of artistic friends I’ve met through going to regular shows,” she says. “It’s like meshing those two worlds, whereas I feel like it’s hard to get them all in the same room." 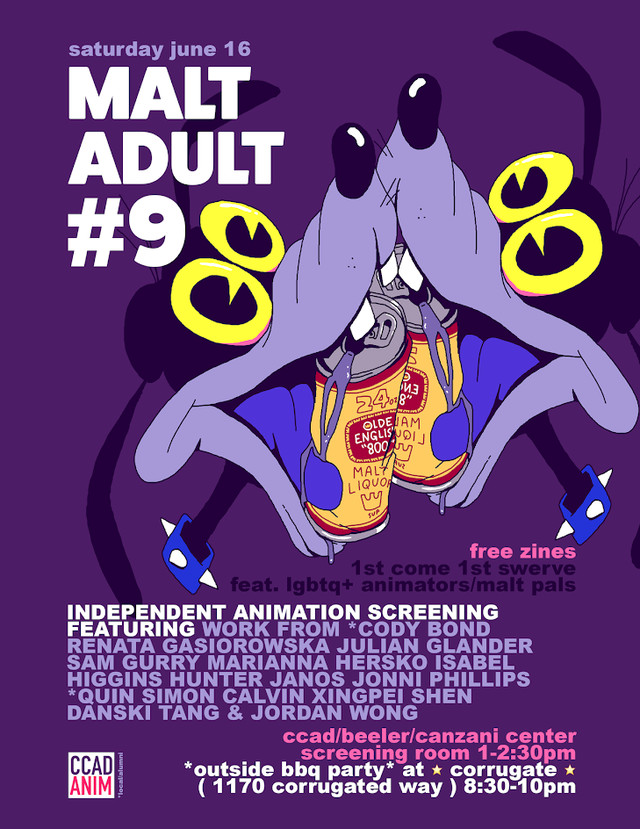 Here’s a compilation of eight distinct short films that resonated with Sarah herself, and Malt Adult attendees:

Mariana Hersko, “The Kid Who Drowned at Summer Camp”

The Kid Who Drowned at Summer Camp from MARIANNA HERSKO on Vimeo.

Hersko's sketch-driven animation features inaudible speaking with captions that fill in the blanks. The story is based around a young girl attending summer camp; she uncovers intense feelings for her male companion, an indistinct navigation between adoration and wrath.

Isabel Higgins, “I Wish For A Pony”

I Wish For A Pony from Isabel Higgins on Vimeo.

CalArts graduate Higgins joins in on the Malt Adult fun with a cartoon featuring a girl named Lucy meeting a magical pony named Clover, who grants her three wishes. As the duo goes on an adventure, each of Lucy’s wishes are selfless, resulting in the most innocent animation of the night.

What do you do when your eye becomes festered with hot dogs? This unconventional question is answered by CalArts student Jonni Phillips, with character Dr. Sam Mulaney being driven mad by the discovery of the bizarre infection.

Rhode Island School of Design graduate Shen reflects on his queer identity and duality with being Chinese-American. As a tribute to singer late Zhou Zhan, the male character’s intimate evening alone converts into majestic self-discovery.

With bright neon animation against a surreal city backdrop, experimental multimedium artist Janos’ cartoon world is literally turned upside downtown, with characters rushing flip gravity back to its original placement, in an attempt to save normality.

Animated simply by fabrics and patterned material, San Francisco-born Jordan Wong reflects upon his mother’s life through the eyes of her clothing. The visuals are nostalgic and decorative, with Wong’s gentle vocals carrying the essence of the film.

Jaelani Turner-Williams is a freelance writer based in Columbus, Ohio. While she contributes monthly for (614) Magazine, you can find her recent work on DJBooth, Vibe and AFROPUNK. Follow her on Twitter @hernameisjae.

Tags: animators , LGBTQ , Columbus , animation , film , short film , Malt Adult
Support Feminist Media!
During these troubling political times, independent feminist media is more vital than ever. If our bold, uncensored reporting on women’s issues is important to you, please consider making a donation of $5, $25, $50, or whatever you can afford, to protect and sustain BUST.com.
Thanks so much—we can’t spell BUST without U.