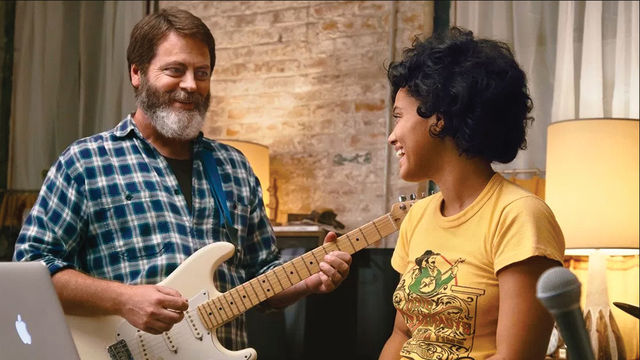 There’s often a conundrum at play when a text is about creating something original—and that something original turns out great. Much like the idea of telling and not showing, it can be quite risky to stake a story on its protagonists writing a genuinely good hit song or hit television show, because if the story revolves around the quality of the characters’ creation, said creation needs to be good. Otherwise, you have a situation like Aaron Sorkin’s ill-fated Studio 60 on the Sunset Strip, in which the audience is expected to believe that Matthew Perry and Bradley Whitford’s author-avatar characters are writing a sketch comedy show that reaches new heights of hilarity and profundity each week. It’s a much less vulnerable stance to pull a 30 Rock, where the show-within-the-show is downright awful, and purposefully so, because then the show can mine humor comes from that gap between expectations and reality.

So it’s particularly fortuitous Hearts Beat Loud’s titular viral, life-changing song (composed by Keegan DeWitt, The Hero) is a bit of a bop—the kind of thing you might hear on college radio before it crosses over to the mainstream charts, or a song that iTunes might have offered as its single of the week back in 2013. It conjures up a sense of sunlight streaming in through a loft window, soaking smooth wooden floorboards in morning light—warm, simple, catchy. In fact, I ran out and bought the Hearts Beat Loud soundtrack the second I left the theater, a giddy grin on my face.

Nick Offerman (Parks and Recreation) trades the gruff standoffishness of Ron Swanson for the almost hangdog-esque, open-hearted demeanor of Frank Fisher, a former wannabe musician turned record store owner (with the expected encyclopedic knowledge of music down pat). While his daughter Sam (Kiersey Clemons, Dope) is engrossed in her studies the summer before college—she wants to be a doctor—Frank has a more laid-back, lackadaisical approach to life, which naturally is a source of tension between the two. But one night during a jam session in their Red Hook apartment, Frank and Sam strike gold with “Hearts Beat Loud,” putting Sam’s poetic lyrics and Frank’s producing skills to good use.

When the song unexpectedly becomes a hit on Spotify, Frank becomes more and more invested in the idea of him and Sam forming a band together and chasing that dream he’d never managed to achieve in his youth—a dream that Frank’s late wife (and Sam’s late mother) had shared. Sam, being the designated “adult” in the relationship, resists Frank’s efforts, determined to leave Red Hook for the west coast, until she falls in love with supportive, impossibly cool artist Rose (Sasha Lane, American Honey). To the film’s credit, there’s simply no fuss made by anyone about the fact that Sam is dating a girl—it’s a fact of Sam’s life that clearly makes her happy, and there’s zero drama about anyone being homophobic. When Frank decides that he needs to close the record store—naturally, the rent is too high—Frank and Sam both find that a major chapter in their lives is coming to an end. And even though they aren’t ready for it, they need to use their music to help come to peace with these major changes. 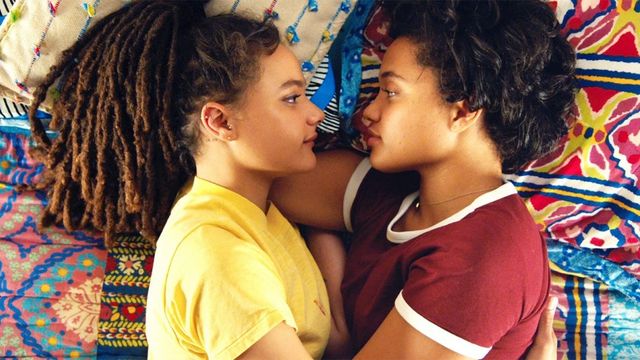 Offerman is strong in his role, and Kiersey Clemons is a star in the making, if not already. Their chemistry together is palpable and believable. My only gripe is that filmmaker Brett Haley (I’ll See You in My Dreams) clearly identifies more with Frank than with Sam, and thus what we see is skewed in favor of more screentime, and subjectivity, for Frank and his arrested development. Even though Clemons is luminous and affecting, Offerman’s Frank simply feels like a more developed character. When Sam learns to ride a bike, a sore spot for both Sam and Frank because Sam’s mother was killed while biking, the emotional emphasis is on how Frank reacts, rather than Sam's experiences, even though arguably they should be given equal weight. Perhaps having a few women in the writing room might have added more complexity and a stronger point of view for Sam.

Along with Sasha Lane’s Rose, Hearts Beat Loud is populated with the kinds of supporting characters you’d expect in a movie about a small town—colorful, quirky, full of advice. Ted Danson (The Good Place) plays Dave, the local barkeep (and a musical has-been as well), while Toni Collette (Hereditary) adds some murkiness as Leslie, Frank’s landlord and potential love interest. Collette and Danson’s characters aren’t strictly necessary to the story in the way that Lane’s is, but they make more of an impression than Blythe Danner’s (1776) Marianne, Frank’s mother, who must have had a larger role that ended up on the cutting room floor. While the character of “funny older guy who loves weed” is practically an archetype at this point, Danson in particular draws a few hearty chuckles. DeWitt also composed the score, which flows as an extension of the sensations suggested by “Hearts Beat Loud”—ambient, synthesizer-based, almost glowing. Among the other original songs in Hearts Beat Loud, “Shut Your Eyes,” a simple guitar ballad performed by Frank, is especially sweet, but never cloying.

The whole of Hearts Beat Loud is gentle, heartfelt, and an enjoyable way to spend some time in the movie theater. Much like Queer Eye and (to a lesser extent) Set it Up, Hearts Beat Loud is perfectly situated for 2018 because it’s a kind of distraction that’s predicated on kindness, love, humor, and charming relationships between people. Hearts Beat Loud, Queer Eye, and Set it Up use their formulaic, simple stories to great effect: They’re almost aspirational in today’s political and social climate, because everyone involved generally has good intentions at heart, and acts on those intentions in positive ways.

Tags: Hearts Beat Loud , Brett Haley , Nick Offerman , Kiersey Clemons , Sasha Lane , movies
Support Feminist Media!
During these troubling political times, independent feminist media is more vital than ever. If our bold, uncensored reporting on women’s issues is important to you, please consider making a donation of $5, $25, $50, or whatever you can afford, to protect and sustain BUST.com.
Thanks so much—we can’t spell BUST without U.