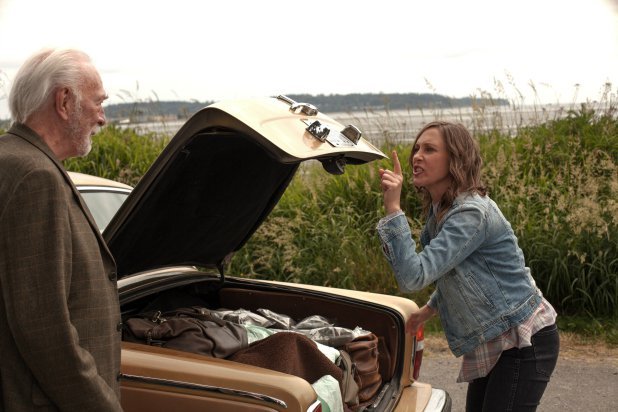 The opening scene of Boundaries (out June 22), written and directed by Shana Feste, shows lead character Laura (Vera Farmiga) discussing, appropriately, her difficulty setting boundaries with her father during a therapy session. In the midst of their discussion, a kitten peeks its head out of Laura’s purse, leading Laura’s therapist to scold her about breaking her promise to stop adopting animals for one month.

The scene sets the tone for the movie: serious mental health problems are played as adorable quirks, whether that’s Laura’s compulsive animal hoarding, her teenage son Henry’s (Lewis MacDougal) habit of drawing sexually explicit nude images of the adults in his life, or Laura’s father Jack’s (Christopher Plummer) history of abandoning his family. After Jack is kicked out of his nursing home for dealing weed, we follow the trio on a cross-country road trip to move Jack in with his other daughter JoJo (Kristen Schaal, who appears in only a few scenes). During the road trip—unbeknownst to Laura—Jack and Henry attempt to sell $200,000 worth of weed so Henry can go to a private school after being expelled for drawing a demeaning, sexually explicit drawing of a female staff member at his public school and also slapping her. Cute, right?

Boundaries is a road trip comedy that’s aiming for more, but instead of treating Laura’s animal hoarding, Henry’s sexual harassment, or Jack's abandonment in a way that’s both honest and funny, Feste gives the characters oh-so-quirky arcs and too-neat endings. Comedies about mental illness that are funny, creative, and take mental health seriously do exist—just look at Crazy Ex-Girlfriend—but Boundaries is not one of them. (2/5)