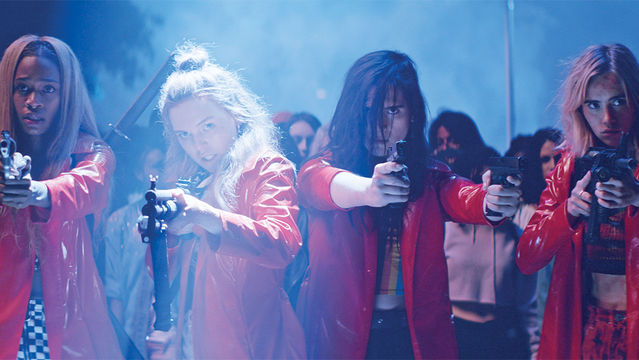 Assassination Nation, the second film from director Sam Levinson, follows a tight-knit friend group made up of protagonist Lily (Odessa Young), Bex (Hari Nef), Em (Abra), and Sarah (Suki Waterhouse) as they kill time in their conservative suburban town, drifting in swimming pools, frequenting boozy parties, and hanging out in Em’s bedroom. There’s a constant sense of being watched that pervades the group’s narrative—never from dubious parents or teachers, but from men and boys. The girls feel eyes on them at all times; even when alone, predatorial presences worm their way into Lily’s webcam and inbox. But rather than shrink away from the sexualization imposed upon them, the girls do their best to live and dress how they want, even when it’s exhausting. When a citywide hack begins publicizing personal photo collections, the aggression lying dormant among the townspeople surfaces in extreme acts of humiliation and soon gives way to full-scale, armageddon-level violence. With the town growing hostile and everyone’s reputation on the line, Lily and her friends are blamed and find themselves fighting for their lives.

Assassination Nation’s plot is driven by the unstoppable force of the internet. The film smartly weaves the literal experience of using a phone into scenes, not by awkwardly superimposing text messages onto the side of the frame as other films have done, but by dividing the screen into panels with one often devoted to a phone screen, and sometimes having a device’s screen take up the entire frame. This technique functions alongside intensified sensory noises (even a knuckle crack or an orange being peeled), pounding music, and dramatic mood lighting, turning the film into a high stimulus collage of colors and vibrations. We feel the supercharged pulse of high stakes text convos and image leaks as characters react to the hacks, turning on one another as the ding of a phone commands.

Technology may be the driving force of the film, but its heart lies in the friendship of the girls. Together, they possess a rare ability to recognize the nuances of human emotion, when everyone else can’t see beyond the shock of scandal. Moments of intimacy between the leading actresses are the glue holding the story together. Particularly compelling is Nef as Bex, whose versatility allows her to reveal painful complexities implicit in being a trans teenager in one scene, and deliver perfect deadpan comedy in another. Bill Skarsgård is also good in a more minor role as a brooding and insecure Billy Loomis/Christian Slater type. The plot build-up is the most engaging part of the film; the climax begins to feel like another Purge, complete with a home invasion sequence and halloween masks. The film never quite resolves itself before coming to a grinding halt, opting in a monologue where some plot holes could have been filled. Nevertheless, Assassination Nation is an entertaining thriller that offers a thoughtful take on the tension between physical and digital life. Desires and livelihoods are stowed away in the private folds of the internet, hidden often because they do run the risk of provoking intolerance, but the truth always comes out eventually—which is all the more reason to shed outdated, normative prejudices and rise to the occasion of the present. (3/5)

Diablo Cody Interviewed By Jill Soloway: From The BUST Archives

Tags: Assassination Nation , movies , movie reviews , Suki Waterhouse , Hari Nef , Abra , Odessa Young , Sam Levinson
Support Feminist Media!
During these troubling political times, independent feminist media is more vital than ever. If our bold, uncensored reporting on women’s issues is important to you, please consider making a donation of $5, $25, $50, or whatever you can afford, to protect and sustain BUST.com.
Thanks so much—we can’t spell BUST without U.