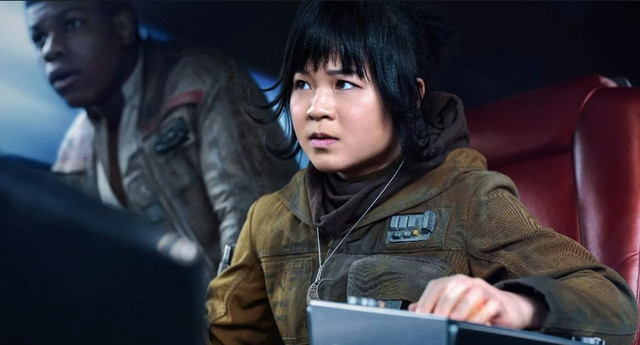 Kelly Marie Tran, a Vietnamese-American actress, recently deleted her social media accounts following months of racist and sexist harassment. Tran starred as Rose Tico, a mechanic turned resistance fighter, in the 2017 Star Wars movie The Last Jedi. She was the first woman of color to have a principal role in the Star Wars franchise.

According to Esquire, some bigoted Star Wars fans have claimed there is a liberal conspiracy within the new Star Wars films, after Kathleen Kennedy took over as president of Lucasfilm in 2012 with a new vision for representation. Star Wars: The Last Jedi director Rian Johnson came out in support of his star by tweeting, “What we talk about when we talk about manbabies.” 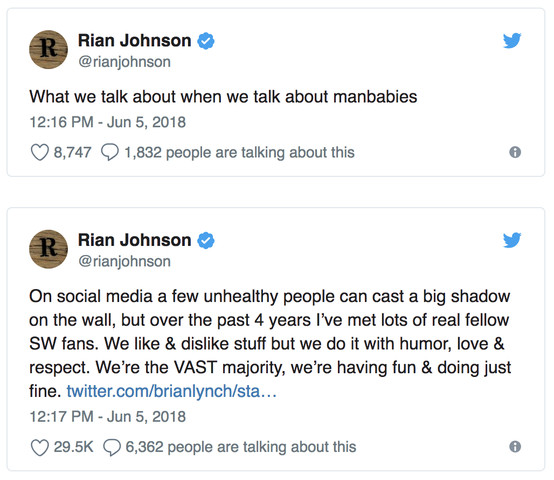 Tran's co-star, Mark Hamill, also rallied behind her when he tweeted a photo of them together with caption, “What’s not to love? #GetALifeNerds.” 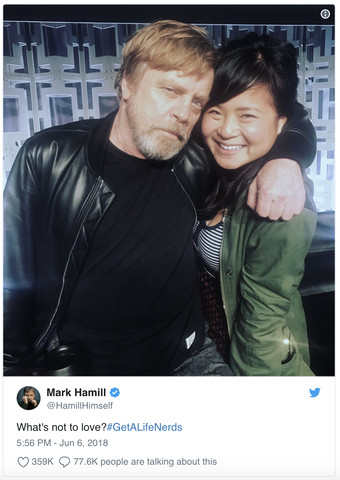 According to E!, in an Instagram post from October, Tran wrote of being cast in the series, “I was terrified of being picked apart, of being scrutinized, of being seen. It took me a year of self-work…to make me realize that it’s none of my business if people like me or not. It doesn’t change my goals, my dreams, what I want to do with the opportunities I’ve been given.”

Tran’s inspiration across the entertainment industry is clear by the rallying cries. Olivia Munn said in an Instagram post, “As an Asian American actress myself, I am SO PROUD of @kellymarietran for forging a path in Hollywood, which is extremely hard because it’s not a path that already exists for us. Not only did she find a way, but she found it all the way to STAR WARS !!!” She continued, “I’m proud of Kelly for taking a stand and saying enough to the bullshit…DON’T TRIP OVER THE HATERS, WALK OVER THEM.”

Jamie Chung tweeted, “You are beautiful, strong, fucking talented and a voice for so many folks like myself…thank you for showing us humility, humor and compassion. Who do I need to check?? I’ll do it. FUCK THE HATERS.”

Fans started #FanArtForRose which includes many drawn images of Tran’s character with her famous line from the film, “That’s how we’re gonna win. Not fighting what we hate; saving what we love.” 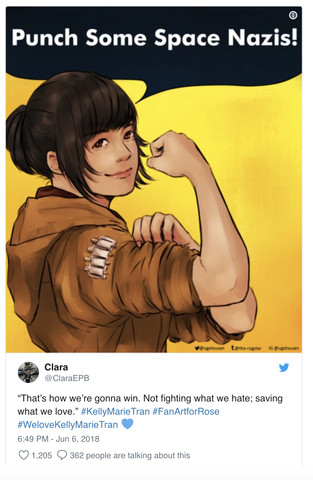 Kumail Nanjiani also spoke out with a tweet that read, “I totally embarrassingly fanned out when I met Kelly Marie Tran. Rose Tico was unequivocally one of the highlights of The Last Jedi. You’d have to be an idiot to disagree with that.”

Idiots indeed. White male fragility is once again disappointing but not surprising. We are in solidarity with you too, Kelly!

Online Harassment Is an Epidemic. Meet The Woman Working To Stop It

For The First Time Since 1958, The Top Three Highest-Grossing Films Of The Year Starred Women