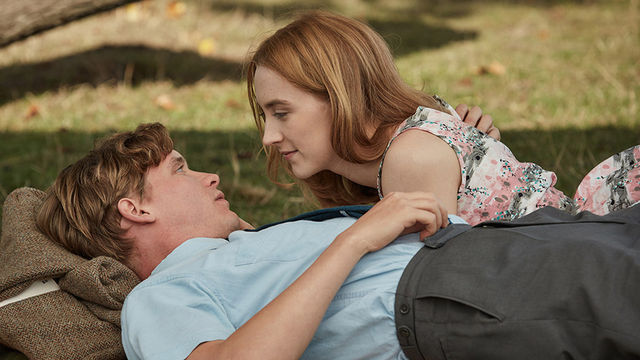 On Chesil Beach is one of two movies released this year starring Irish-American babe Saoirse Ronan and British actor Billy Howle, the other being the adaptation of the Anton Chekhov playThe Seagull. And while both are beautifully shot period pieces, you’ll probably have better luck spending your money and time on the latter.

Ronan and Howle star as young newlyweds, Florence and Edward, in director Dominic Cooke's adaption of the Ian McEwan novel the same name. The year is 1962, and sex education is non-existent. The film opens with the two walking along Chesil Beach toward their honeymoon hotel, where they’re about to sit down for a romantic dinner and eventually, consummate their marriage. But the air is tense as they dine over beef, potatoes, and red wine. And while it may seem like the two share a similar anxiety about their relative lack of sexual experience, as the film rolls along, it becomes clear that Florence’s anxiety is fueled by an entirely different, darker flame.

What follows is a stitched together narrative of Florence and Edward’s life before and after their short marriage. McEwan adapted his own work for this film, and while it’s easy to place the blame on the script, it’s hard to do so because the individual chapters play smoothly. It’s the transitions between years that don’t. Essentially, the film’s sloppy time hopping is so visually apparent that it consequently diminishes the narrative’s twists, turns, and big reveal.

The film jumps from 1962 to 1975 to 2007, and by the end of the 45 complicated years, viewers are left unsatisfied, confused about the character’s motives and, more noticeably, the unnecessary lack of resolve. Florence’s disturbing past is revealed flatly. Which is a shame, because it’s clear that the story leans more towards Florence and her childhood abuse. The film spends so much time on the couple’s budding romance that it forgets that it’s a story about one girl’s debilitating revelation more than it is about Florence and Edward’s marriage.

Despite the flawed structure, though, Ronan and Howle manage to carry the film all the way to its end. The ridged jumps between the years soften as the two take over the screen, making it easy to get lost in the scene rather than the film as a whole. And though I haven’t read McEwan’s novel, I’m going to give the script the benefit of the doubt and assume that the novel dives more deeply into Florence and Edward’s reasoning for not reconnecting.

When it comes down to it, the overarching problem with On Chesil Beach is that it falls prey to the “if you didn’t read the book then you won’t understand the movie” arc. So maybe read the book first. (2/5)

Tags: On Chesil Beach , Saoirse Ronan , Billy Howle , Dominic Cooke , Ian McEwan , movies , movie review
Support Feminist Media!
During these troubling political times, independent feminist media is more vital than ever. If our bold, uncensored reporting on women’s issues is important to you, please consider making a donation of $5, $25, $50, or whatever you can afford, to protect and sustain BUST.com.
Thanks so much—we can’t spell BUST without U.