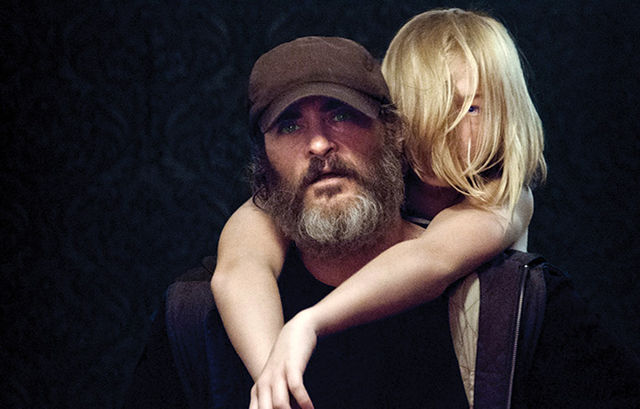 Writer/director Lynne Ramsay (We Need to Talk About Kevin, Morvern Callar, Ratcatcher) is back with this grim tale about a veteran with a very particular set of skills. Joe (Joaquin Phoenix) makes his living by tracking down missing girls. This odd career compounds his already significant trauma from his time serving overseas and an abusive childhood, as we learn from flashbacks. His latest assignment is to find a pre-teen named Nina (Ekaterina Samsonov), but in the process, he uncovers a gruesome political conspiracy that takes him to the edge of sanity.

Phoenix is at his shell-shocked best as the haunted Joe, veering between explosive violence and surprising tenderness. But frustratingly, his dialogue is hard to understand both because of his giant beard and the injuries his character sustains throughout the film. Judith Roberts—known for her wide-ranging work from Eraserhead to Orange is the New Black—also deserves special attention for her performance as Joe’s mother. The screenplay, based on a book by Jonathan Ames, suffers from a thinly constructed plot, but the propulsive narrative and quality performances make it hard to look away, no matter how much you might want to. 3/5

"Lean On Pete" Is A Movie About Home, Horses And Poverty

Lola Kirke, John Cho And Aaron Katz On Why "Gemini" Is A Movie For The Trump Era