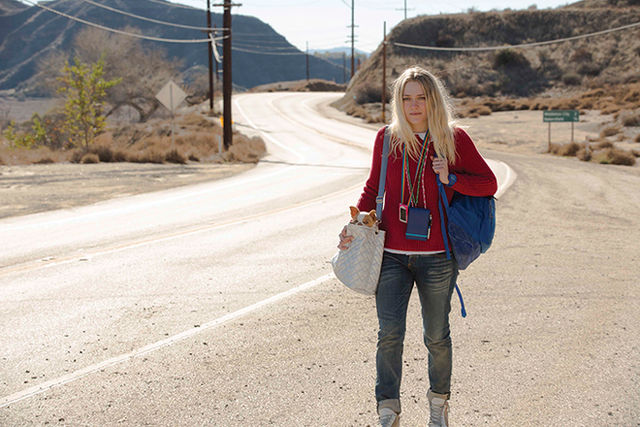 Please Stand By
Directed by Ben Lewin
Out January 26

In the road-trip dramedy Please Stand By, Dakota Fanning plays Wendy, a 21-year-old autistic woman who sneaks out of her group home with her dog and travels across California to enter a Star Trek script-writing contest. Along the way, she encounters a series of sometimes supportive and always stereotypical strangers, including a young mother with a criminal boyfriend and a heart of gold, a wise old black woman, and a goofy male nurse. As Wendy makes her way across the state, her older sister (Alice Eve) and the head of her group home (Toni Collette) try to track her down.

Though Star Trek fans might enjoy the references, Please Stand By fails mainly because it doesn’t depict Wendy’s autism with any realism or nuance. Her character isn’t much more than a cutesy uniform of colorful sweaters with Peter Pan collars and a fluency in Klingon. And the other characters are just as flat. The road-trip plot is simple, but there are befuddling plot holes—like when Wendy is hospitalized after a car accident, but we never find out what happened to the others in the car—and the dialogue is often cringe-worthy. Skip this one and watch one of Fanning’s or Collette’s better films instead—or a few Star Trek episodes. 2/5 – Erika W. Smith

In "Like Me," A Young Woman Goes On A Crime Spree For The "Likes"

Diane Kruger Seeks Revenge On Neo-Nazis In "The Fade"

Tags: Please Stand By , Dakota Fanning , Toni Collette
Support Feminist Media!
During these troubling political times, independent feminist media is more vital than ever. If our bold, uncensored reporting on women’s issues is important to you, please consider making a donation of $5, $25, $50, or whatever you can afford, to protect and sustain BUST.com.
Thanks so much—we can’t spell BUST without U.