"From The Land Of The Moon" Blends Postwar Drama, Romance, And Mystery: BUST Review 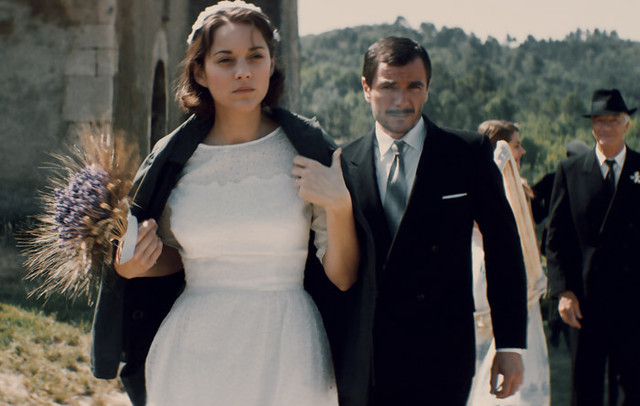 Part postwar drama, part romance, part mystery, From the Land of the Moon is a French film that follows a woman named Gabrielle (Marion Cotillard) through almost two decades of her life. After an introductory scene in which Gabrielle flees a cab she’s sharing with her husband and teenage son, the film flashes back to her life as a young woman in rural France, post-WWII. She has an obsessive crush on her teacher and is prone to both public scenes and sudden abdominal pains, resulting in a diagnosis of “nerves.” But it’s difficult to tell if Gabrielle has a mental illness, physical illness, or is striking out because of boredom.

Pressured into marriage with a man she does not love, José (Alex Brendemühl), Gabrielle miscarries and is diagnosed with kidney stones that will make it impossible for her to bear children if left untreated. Sent away to a luxurious spa to recover, she finally finds happiness with a handsome lieutenant, André Sauvage (Louis Garrel), who is also suffering from a serious illness. But when she leaves the spa, Gabrielle cannot find Sauvage again. Director Nicole Garcia creates a romantic drama that at times falls back on clichés, but also covers new ground with a love-it-or-hate-it unexpected ending.

Sofia Coppola's "The Beguiled" Tears Apart The Original - But Not Always In The Best Way: BUST Review

Jenny Slate Will Make You Cry For About A Million Reasons In "Landline": BUST Review