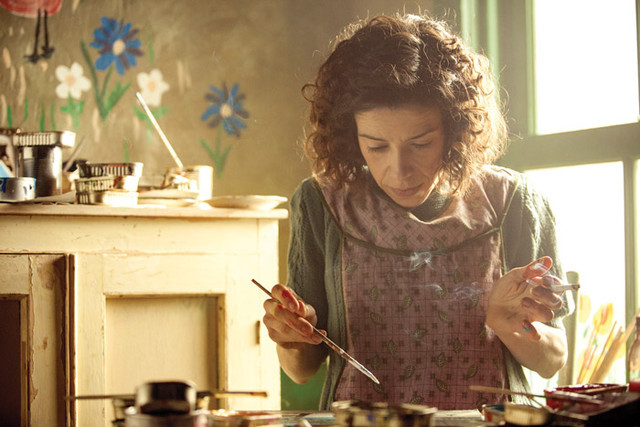 Maude Lewis was a beloved Canadian folk artist who is certainly a worthy subject for a biopic, but is Maudie worthy of her? The vagueness with which director Aisling Walsh drops viewers into Lewis’ world raises many questions. Why is Lewis’ severe rheumatoid arthritis explained away as her being “born funny”? Why did her family reject her? And most importantly, why did this intelligent, willful woman enter into a horrible marriage to a monosyllabic fishmonger? The film’s saving grace, however, is lead actor Sally Hawkins’ detailed portrayal of Lewis. Complete with clenched hands, a hitch in her gait, a hunched-over frame, and a speech impediment, it’s a performance full of fire and a little bitchiness that effectively staves off pity.

The production design is excellent, and Lewis’ bright paintings take over every surface of the dark two-room house she shares with husband Everett (Ethan Hawke). But there’s a sort of “So what?” feeling to the narrative arc that does a disservice to Lewis’ importance in folk art history. One could also point out the problem of casting an able-bodied actor — no matter how talented— to play a real person whose disabilities greatly affected her life’s work. Ultimately, though, Maudie mostly succeeds by skirting twee sentimentality. 3/5

"Everything, Everything" Is A Beautiful New Kind Of Teen Romantic Drama: BUST Review

Tags: Maudie , Aisling Walsh , Sally Hawkins , Ethan Hawke , movie review
Support Feminist Media!
During these troubling political times, independent feminist media is more vital than ever. If our bold, uncensored reporting on women’s issues is important to you, please consider making a donation of $5, $25, $50, or whatever you can afford, to protect and sustain BUST.com.
Thanks so much—we can’t spell BUST without U.