"Megan Leavey" Is A Must-See For Dog Lovers: BUST Review 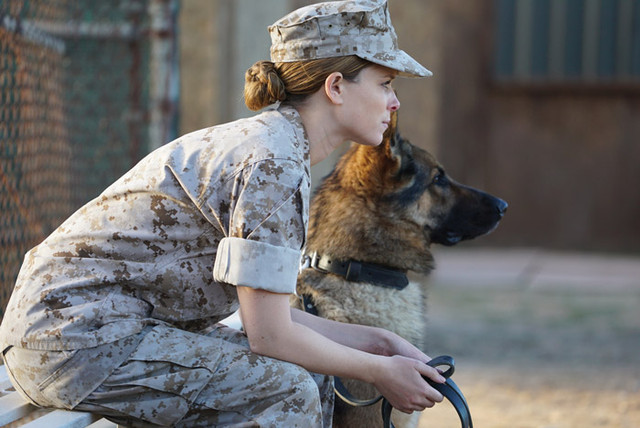 Gabriela Cowperthwaite follows up her controversial SeaWorld documentary Blackfish with something completely different - the heartwarming story of a girl and her dog. Though based on a true story, Megan Leavey is Cowperthwaite's first film that is not a documentary. Viewers follow Megan (Kate Mara), a young woman who joins the Marines to get away from her troubled past. After she's assigned to clean up the combat dogs' poop as a punishment, she commits herself wholeheartedly to the goal of partnering with a combat dog of her own. Finally, she's assigned to the most aggressive dog in the Marines: Rex, a huge German Shepherd. It's a struggle at first, but eventually, they bond. When the pair is shipped out to Iraq, they work together to save lives - but the movie's real drama comes after Megan leaves the Marines and campaigns to be allowed to adopt Rex after he's retired, instead of allowing him to be put down.

Mara holds her own in a role that's mostly talking to a dog, the dog is adorable, and Common, Tom Felton, Edie Falco, and Bradley Whitford show up in supporting roles. Plus, Ramon Rodriguez from The Wire plays Megan's swoonworthy love interest. Cowperthwaite isn't doing anything particularly original with this film, but dog lovers will find it an enjoyable watch.