Details
BY BUST Magazine
IN Movies
Published: 23 May 2017 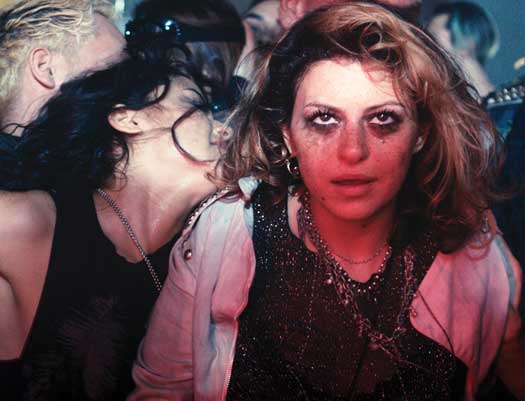 Co-written and directed by Amber Tamblyn

Amber Tamblyn’s directorial debut, Paint It Black, is a visually stunning exploration of grief and a fitting follow-up to her 2015 poetry collection, Dark Sparkler, which explored the lives and deaths of doomed actresses. Based on the novel by Janet Fitch, with a script co-written by Tamblyn and Ed Dougherty, Paint It Black opens with Josie (Alia Shawkat) receiving the news that her boyfriend (Rhys Wakefield) has committed suicide in a motel. When the police ask Josie if her boyfriend has any surviving relatives, Josie’s reply, “a mother,” echoes ominously. Soon, Josie comes face-to-face with that mother, Meredith (Janet McTeer), a concert pianist who swings wildly between treating Josie like a daughter and trying to harm her.

Supporting actors include Alfred Molina and Breaking Bad’s Emily Rios, but the film’s focus is all on Josie and Meredith’s twisted relationship—and Shawkat especially puts in a strong performance. Dream sequences and flashbacks create a complicated sense of time, as does lighting that contributes to the film’s hallucinogenic feel. While these sequences can occasionally feel heavy-handed, they also convey Josie’s stunned experience of grief, as in a particularly memorable mosh pit scene. All in all, Tamblyn has a unique perspective as a director, and we’re excited to see what she creates next.

"Everything, Everything" Is A Beautiful New Kind Of Teen Romantic Drama: BUST Review

"The Most Hated Woman In America" Is An Incredible Waste Of Talent: BUST Review