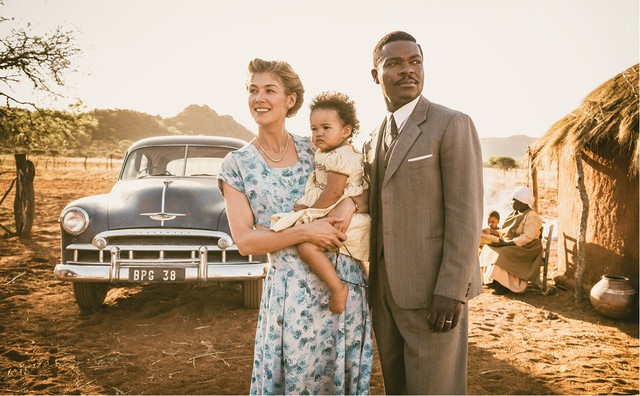 A United Kingdom?
Directed by Amma Asante
?Out February 17
4 out of 5 boobs

A United Kingdom is, at its heart, a gorgeous love story about a two people from radically different worlds. But like director Amma Asante’s previous film, Belle, it’s packed with political subtext that’s all too relevant to today’s world. Seretse Khama (David Oyelowo) is a law student in London when he meets Ruth Williams (Rosamund Pike) at a dance; they’re instantly smitten, but there’s much more working against them than just the everyday racism of the 1940s. After a charming whirlwind romance, Seretse tearfully tells Ruth he’s done with his studies and must return home to the country now known as Botswana, where he will be king. When Seretse brings home a white bride, it becomes an international incident that threatens the future of his leadership and his tribe itself.

Oyelowo and Pike are perfect together, conveying a deep well of love buoyed by joy and fierce loyalty. The supporting cast is equally great, with standout performances from Terry Pheto as Seretse’s sister Naledi, Downton Abbey’s Laura Carmichael as Ruth’s sister Muriel, and Jack Davenport as a U.K. diplomat. Based on a true story, A United Kingdom is a welcome entry into the genre of romantic historical dramas made for intelligent adult audiences.

Sexual Harassment In The Workforce And The Reference Problem