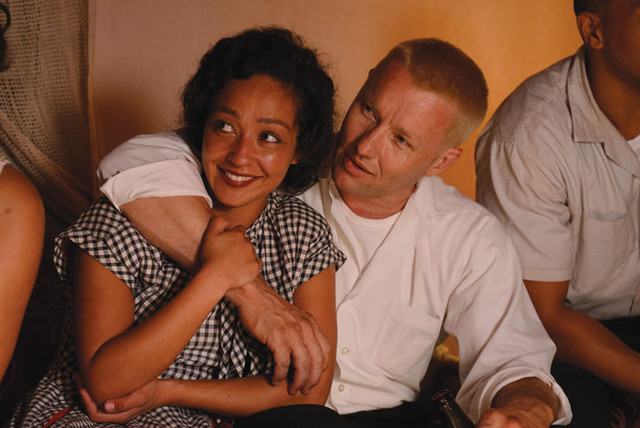 LOVING
Written and directed by Jeff Nichols
Out November 4
Rating: 3/5

Almost 50 years after the Supreme Court decision Loving v. Virginia made interracial marriage legal across the U.S., a biopic has arrived. Writer/director Jeff Nichols (Mud) tells the story of the Lovings’ case as an intimate family drama, spending far more time in homes and cars than in courtrooms. The film opens in 1958, as Richard Loving (Joel Edgerton), who is white, and his pregnant girlfriend Mildred (Ruth Negga), who is black, travel from their home in Virginia to Washington, D.C., to get married. But upon their return, they’re both thrown in jail for breaking anti-miscegenation laws. After their release, they leave the state, but years later, the Civil Rights movement inspires Mildred to fight for the legality of her marriage—and all interracial marriages in the U.S.

Ruth Negga’s performance is the best part of the film; she is all quiet determination, seeing the larger implications of her case when her husband does not. Unfortunately, hers is also the only fully developed black character (the white lawyers and Richard’s mother get much more screen time than Mildred’s family or the Lovings’ children). In this regard, it’s worth pointing out that the film didn’t involve many people of color in writing, directing, or production. One can only assume it would have been the better for it. - Erika W. Smith

Note: Two people of color were involved in Loving, Oge Egbuonu was as an Associate Producer and Peggy Loving as a consultant on the project.