'The Edge Of Seventeen' Is An Ode To Teen Angst: BUST Movie Review 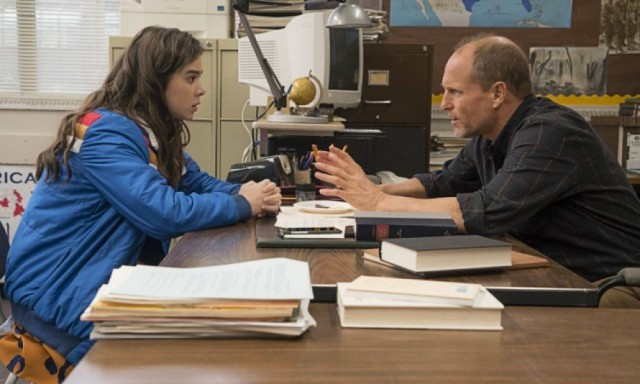 THE EDGE OF SEVENTEEN
Written and directed by Kelly Fremon Craig
Out September 30
Rating: 2/5

In this ode to teen-girl angst, Hailee Steinfeld stars as Nadine, a prickly high schooler whose life is upended when she walks in on her BFF Krista (Haley Lu Richardson) hooking up with her brother Darian (Blake Jenner). As we learn in flashbacks, Nadine has never been outgoing or laid back; even as a child, she butted heads with her mother (Kyra Sedgwick) and was always outshined by Darian’s athletic popularity. Krista is actually Nadine’s only friend, so it especially smarts when she develops feelings for Darian. Left to her own devices, Nadine unravels—she latches on to her sardonic history teacher (Woody Harrelson), drums up drama with a lovestruck classmate (Hayden Szeto), and stalks her dreamy emo crush (Alexander Calvert).

According to everyone around her, including herself, Nadine is a selfish, damaged screw-up, and she acts accordingly. Unfortunately, the writing isn’t strong enough for Nadine to realize her ultimate form, the Unlikeable Female Protagonist (see Young Adult or Heathers for some prime examples). Instead, she’s just an aggressively unpleasant teen in purposefully mismatched clothes. Plus, there are no James-Spader-style baddies lurking around Nadine’s suburban Portland high school for her to fight against—she’s just an asshole. The Edge of Seventeen is to be commended for even attempting a coming-of-age story with a character like Nadine at its center. And though it does lean on voiceover exposition and flashbacks that don’t quite fly, and the characters don’t feel fully fleshed out, it’s cool to see the little girl from True Grit all grown up—almost, anyway. –Jenni Miller

Jenny Slate And Nick Kroll Are Two-Thirds Of A Love Triangle In ‘My Blind Brother’: BUST Interview

How Sarah Polley Went From Child Star To Oscar-Nominated Director

'The Girl In The Book' Uncovers The Way Older Men Prey On Teenage Girls: BUST Interview

Tags: The Edge of Seventeen , Movies , Movie Review , Hailee Steinfeld , Woody Harrelson , Kelly Fremon Craig
Support Feminist Media!
During these troubling political times, independent feminist media is more vital than ever. If our bold, uncensored reporting on women’s issues is important to you, please consider making a donation of $5, $25, $50, or whatever you can afford, to protect and sustain BUST.com.
Thanks so much—we can’t spell BUST without U.