'Careful What You Wish For' Is A Star Vehicle For Nick Jonas' Abs: BUST Review 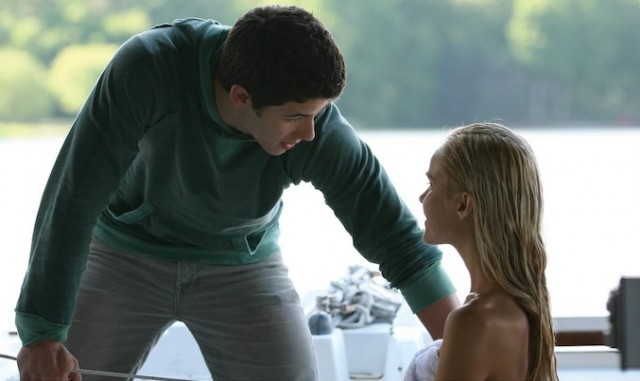 The erotic thriller Careful What You Wish For has the dubious honor of being the youngest Jonas Brother’s first starring role in a feature film. Nick Jonas is a far better singer than he is an actor, but he’s still better than some of his costars. Unfortunately, that’s not saying much. Jonas plays Doug, a shy, virginal teen who gets a summer job working for a sinister millionaire (Dermot Mulroney) with a hot, blond trophy wife named Lena (Australian actress Isabel Lucas, who tries and fails to hide her accent). The camera lingers over Lucas showering nude long before she gets to speak a line, but director Elizabeth Allen goes for equal opportunity objectification—Jonas spends much of his screentime shirtless, if not completely naked. You can probably tell where this is going: Doug is deflowered in just a few scenes, and he and Lena’s attempts to hide their tryst from the evil husband do not succeed.

Overall, this is a typical thriller with cheesy dialogue and bad acting. But Allen manages to pull off a fun twist ending. The film could be enjoyable under the right circumstances— perhaps in tandem with a drinking game—but in the end, it’s just a star vehicle for Nick Jonas’ abs.

Watch the trailer below:

Tags: nick jonas , isabel lucas , film review , film , movies , from the magazine
Support Feminist Media!
During these troubling political times, independent feminist media is more vital than ever. If our bold, uncensored reporting on women’s issues is important to you, please consider making a donation of $5, $25, $50, or whatever you can afford, to protect and sustain BUST.com.
Thanks so much—we can’t spell BUST without U.