John Waters Tells Us About All His Feminist Heroes: From The BUST Archives 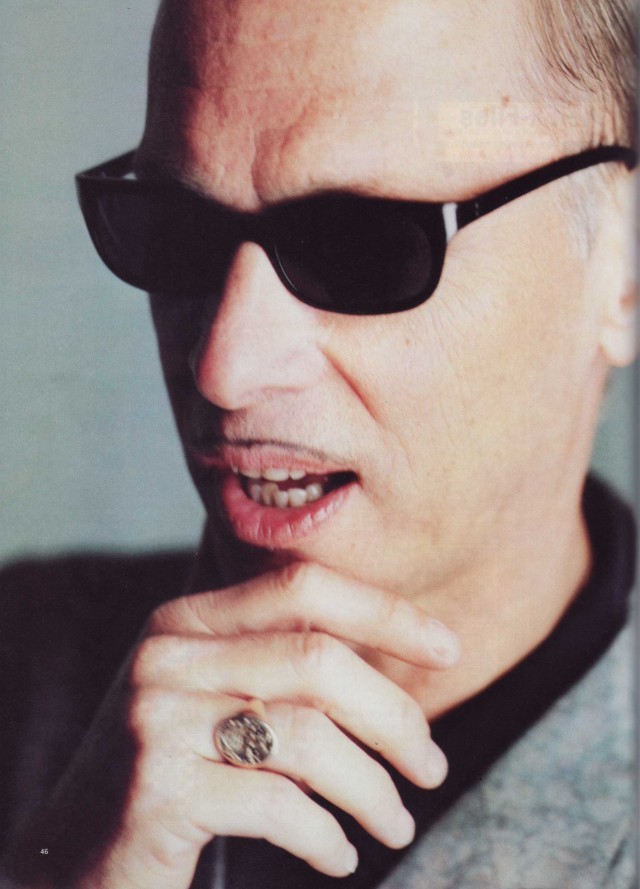 There are two kinds of people in this world: those who love John Waters and assholes. I am, of course, one of the former, so I was thrilled to get the chance to interview the man dubbed by William S. Burroughs as the “Pope of Trash.”

For over 30 years, this director and author has been enlightening us with his special brand of filth. No one can touch his brilliant sense of whacked-out humor or his unique flair for glorifying trash. John graciously met me at his New York City pied-à-terre, a very posh pre-war apartment that is tastefully decorated with great art. His latest acquisition is a Warhol “Asshole” painting, a present to himself upon completion of his latest film, Cecil B. Demented. Complete with pyrotechnics, Cecil is an action-packed movie, starring Stephen Dorff as Cecil, a renegade director who kidnaps a big Hollywood Movie Star (played by Melanie Griffith) and forces her to be in his underground movie. It’s an insightful look at guerilla filmmaking. For a very charming gentleman, Mr. Waters can certainly be scathing (the beauty of crime is a favorite subject), a quality we adore about him.

AREOLA: This is the “Men We Love” issue, and you are a man who we love.

AREOLA: Tell me about the women who have inspired you.

JOHN: I never thought of it that way. Certainly there were feminists who inspired me. Kate Millett is my favorite feminist. I really really like all her books. Ti-Grace Atkinson, Ginny Foote—remember her? I feel bad bringing this up, but she was the head of the NOW organization until there was a question about a murder maybe she had been involved in. She got off, but...

AREOLA: You’ve got a thing for the crime angle on feminism.

JOHN: Yeah. All my feminist heroes basically have very dark pasts. I always like somebody with a past, you know, and if it’s a record, that’s alright too. All the obvious female villains were big influences on me as a child—the Wicked Witch of the West, the Wicked Queen in Snow White.

AREOLA: You work with lots of women, right?

JOHN: When I started making films, many of the people behind the scenes were women. Women On Film called me recently to put me on the board and I thought, what does that mean? I thought they were being rude or something, but they said there are men on [the board] too. I've had a lot of women on my crews. This time they were like, “We’re women in film, not women surrounding film.” They had a prejudice against the women in film who aren’t on the set, lugging equipment and stuff. That's women surrounding film, they call it. Which I think is funny, you know, different levels of how in you are as a woman in film.

AREOLA: I loved it when they poked Melanie Griffith with the cattle prod! Was she a good sport?

JOHN: Certainly she was a good sport! Melanie was not like [her character] Honey Whitlock. I mean, she wasn’t a bitch. It was low-budget, compared to what she’s used to, and to film that whole movie in thirty-two days! She got into it, she became a terrorist with us. She was part of the pack. I’m not saying there weren’t days when she was exhausted, when she was sick; there were days when it wasn’t like, “Good Morning!” But she was certainly ready. She understood the humor of this movie. I never had to explain to her what it was or why I would do this. She got it. Which is the whole thing—whether you get it or not.

AREOLA: So she was willing to do anything?

JOHN: Yeah, she was willing. You know that scene where they give her the makeover and she looks in the mirror and she says, “Oh, I look terrible” and everybody applauds? Well, that happens on every one of my movies for real. [The actors] usually are sobbing, so it's an old tradition with us. She wanted to be in the movie, she knew what it was, and she was gonna make it. My direction was, if you make a John Waters movie, you just can't go halfway with it. If you’re gonna do it, do it. And they’ll blame me if it doesn’t work, not you. Unless you go halfway – then they’ll blame you. She certainly went for it.

AREOLA: You’ve got some interesting female characters in Cecil.

JOHN: All the women are very, very strong characters in this movie. You have a happy Satanist [and] a bearded woman, Harriet (it’s a real beard) who’s the producer. There’s never an issue if anybody’s gay or straight, except for one guy who is straight and feels so guilt ridden because he wants to be gay and isn’t. Which I found for real in colleges. I’d look at these people and I’d say they’re not gay, I can tell they’re not. But I always tell them that and they get real uptight and sometimes they start crying, which I find hilarious. In fact, only if they’re rich. That doesn’t ever happen in poor schools.

AREOLA: We did a reader survey and a lot of the younger women are saying that they’re bisexual or lesbians, and I wonder about that.

JOHN: I know! And that’s what I mean, because they aren’t! Let’s be real here – you can't fake eatin’ pussy. That’s putting it rudely, but you can make out for your boyfriend to turn him on, which is what they mean because that’s what hetero men want the most. That’s their fantasy. But actually, to be gay, you have to do things that are tough to fake if you really aren’t at least bisexual. For men or women—oral sex is not something you can lightly fake.

AREOLA: l was curious about the casting in Cecil B. Demented. It seems like there weren’t as many non-actor-y type people. Is that something you’re getting away from?

JOHN: Yeah, but I think there were lots of day-part parts, you know, really good actors that certainly were all from Baltimore. I don’t think since Edith Massey died that I’ve ever really had, well...l had Moby Dick [renowned NY drag king] in Pecker but I don’t think of her as a freak so much. She’s certainly a New York character, shall we say? But I think the days of me taking people off the street are pretty much gone.

AREOLA: Why is that? Too hard?

JOHN: No. Most of the people that are real eccentric characters that I know are terrible actors. You get them in front of a camera, they can play themselves, but they can’t play a character. Edith had a certain charm, due to her inexperience in a way, but no one could imitate her—she was a complete original. Maybe l just haven’t never met anyone since that I think would be that good, but I have a feeling today if I met someone like that I would have an actor play that part.

AREOLA: This movie seemed like your “fuck you” to the Hollywood system. Is it?

AREOLA: Did you go to Catholic school?

JOHN: I went to private grade school, public junior high, and Catholic high school. So I’m a product of all of it. But the thing that fucked me up the most (since I went to private grade school) was that I had to go to Sunday school with kids that didn’t go to Catholic school, so they were really torturous and mean. They’d tell you your father was gonna go to hell, and don’t ever watch Ozzie and Harriet—it was really wrong because the father wasn’t strong enough. What? This is child abuse. To tell a kid his father was gonna go to hell because he’s not Catholic, these people should be arrested! But I’m still obsessed by the letters of Fatima; I’m obsessed by the bullshit spin they put on it. I really like this book, Papal Sin by Garry Wills. It has a lot of stuff about insane Catholic behavior, which I’m a fan of reading about. I read all that kind of stuff.

AREOLA: I went to Catholic school.

AREOLA: What was it like being directed by Woody Allen in Sweet and Lowdown?

JOHN: It was great. I went in for the reading, we talked. I didn’t ask anything because I knew you weren’t supposed to, and I wanted to get the part and I did. It took one day. He did tell both myself and Sean Penn what to do. He did direct us, and it was great. I’m a huge Woody Allen fan. He’s the only director [whose career] I’m jealous of—to be able to just make one movie every year without anybody saying anything, without it even mattering how much money they make. He seems to be totally unaffected by it. I’ve seen every one of his movies. I wish he’d make another drama. The Bergman-esque ones are my favorite. Woody was good at being Bergman, when he did Interiors. I went to the premiere [of Sweet and Lowdown] with Patty Hearst, and Ruth Brown was the singer, and I met Soon-Yi, so what more do I want? It was the Woody Allen experience.

AREOLA: Do you have plans to write any more books?

JOHN: I have two ideas for two books, but as long as they let me make these movies, I gotta keep doing them. I really like writing because it’s just me, I don’t have to have anybody else involved, I just sit down and write every day. But I’d like to do that when they won’t let me make movies. You know, movies are kind of the passion. They’re harder to get. So while they’re saying yes, continue. Because if you go away for a year, the people that say yes forget. You can’t walk away from it. You can’t take off for two years. You can if you’re Scorcese, but I’m not.

Take The Pain Out Of Celebrating Childbirth With These Party Pointers