'The Bronze' Is The Anti-Inspirational Sports Movie: BUST Movie Review 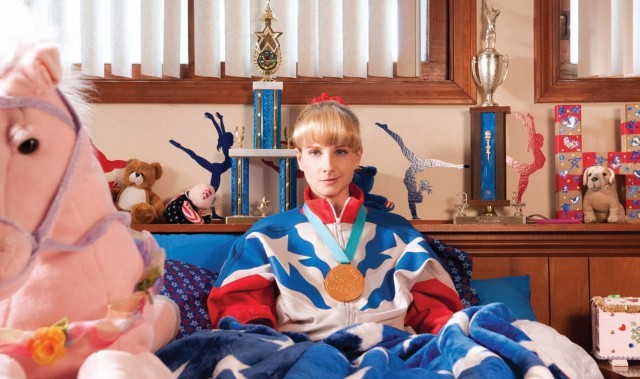 The Bronze
Directed by Bryan Buckley
Out March 18
Rating

In the oddball anti-sports comedy The Bronze, Melissa Rauch stars as a washed-up former Olympic gymnast who is doing her best to keep reliving the glory days of her miraculous bronze medal victory many years earlier. Still living in her Ohio hometown and scoring free junk food at the mall, she seems content to live the rest of her days in her old Team USA uniform. That is, until her former coach dies suddenly and leaves her with a mission: to train a trusting young gymnast (Haley Lu Richardson) who has the talent to win the gold.

The Bronze is the first feature by director Bryan Buckley, but it really belongs to Rauch, who also co-wrote the script with her husband, Winston Rauch. Rauch’s character could easily be too cutesy, too cruel, or just too annoying if played by another actress. But audiences will love her particular brand of arrested development. The bitingly smart and laugh-till-you-snort script provides plenty of memorable one-liners and an unforgettable gymnastic-sex scene. Less easy to love is the plotline about the young gymnast, who doesn’t deserve the malice the screenwriters throw her way. Sebastian Stan, Thomas Middleditch, and Cecily Strong round out a strong supporting cast, making the film worthwhile for sports lovers and haters alike.

'Her Cleavage Is Her Best Feature': The Sexist World Of Casting Calls

Melissa McCarthy On Busting Barriers And Being The Boss: BUST Interview

Tags: the bronze , melissa rauch , film , comedy , from the magazine