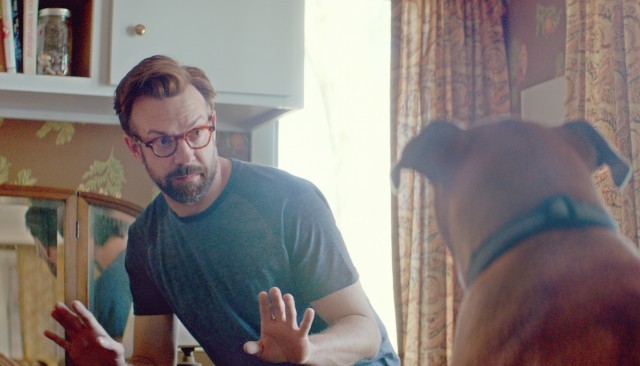 In his latest movie, Tumbledown, Jason Sudeikis plays a music history professor at Hofstra University on an assignment to write a biography about Hunter Miles, a folk singer whose untimely death occurred on the heels of his success. Sudeikis’ character, Andrew, travels to Maine to interview Hannah (Rebecca Hall), the protective widow of the beloved singer, to see if he can unearth the deeper meaning behind Hunter’s death. Though the relationship starts off rocky, the two agree to co-write Hunter’s biography. Andrew faces distain from the locals, including an old flame of Hannah’s played by Joe Manganiello, and her watchful parents, played by Blythe Danner and Richard Masur. Dianna Agron and Griffin Dunne also co-star. BUST got the chance to speak with Jason about the movie’s core message, what he’s working on next, his days on Saturday Night Live, and what it means to be a feminist.

Courtney Bissonette: I have one criticism to start off with.
Jason Sudeikis: Go for it. Do you want me to then defend it?

CB: I don’t know if you can, but if you’re up to the challenge. You play a teacher from Hofstra University doing some investigating in order to write a biography on a deceased musician.  I went to Hofstra and I can tell you they do not have teachers as pretty as you.
JS: Oh boy.  No, that’s fair. I think [director] Sean Mewshaw wanted to insinuate almost like that adoration that you see the young students, at the beginning of Indiana Jones, had for Harrison Ford’s character. Again, far too complimentary to me and it’s kind of one of those things that I was like, "Are you sure you want me to play this part? Okay."

CB: Speaking of which, this is a completely different role for you.
JS: You mean as far as people have seen of me? But I have felt not just comedy, but drama and tragedy in my own life.

CB: How did it come to you?
JS: It was sent to me through agents. This was probably four years ago at this point. I really loved the story and I thought it felt old school, and even older school then when everybody talks about the 90’s being the heydays of romantic comedies. For me, it had sort of the feel of a Cary Grant/Katharine Hepburn film or something like His Girl Friday, where the two were bickering in a very clever, matter of fact way at odds with each other. I believed in the emotional journey the two people go through and because it is a love triangle, but it doesn’t deal with spectres and spirits.

CB: What’s refreshing is that the movie doesn’t quite fall into any one category. It’s comedic and there is a romantic storyline but it’s by no means the main focus of the movie. I don’t think you can call this a rom-com.
JS: I agree. I mean, it feels like a movie along the lines of Terms of Endearment or Ordinary People. Movies that just don’t get made much anymore and are very rarely seen. The hardest part of movie making is not the making of the movie, it’s having people see it. It’s something that for me personally I really, really like and want to see more of. Diversity extends beyond simply gender and race. It also extends into genre, style of film, and quality of film. And while by no means does that diminish the other issues with diversity, it is the kind of story that I think more people would respond to if they were given more awareness of the options out there.


CB: Possibly the biggest theme of this movie is the death of a loved one and how people deal with it. But I liked the fact that it isn't cheapened by downward spiraling and self destruction that we often see in movies just to make it more interesting. It isn't flashy in that sense and I think it makes the female character stronger.
JS: Hannah might have already gone through her five stages. I can understand why those walls are up. Where the deserved or undeserved snark that she has in her utility belt that she uses to spritz me with when my character gets a little too verbose or specific or pointed himself. So that's one of those things that I love about it. I thought this was a great role for a woman. Which is why I chose to do this movie, or Sleeping with Other People, which I felt was a great part for a lady, it wasn't just like, "Here is how dudes feel and here is how girls dress."

CB: Are you planning on continuing to make that leap into more dramatic roles?
JS: It doesn’t feel too much like a leap from the inside here. Having experienced comedic, dramatic, and tragic moments in my own individual life but I understand the perception of that. For me, it is literally just the story. I attack it from the inside no differently than smuggling weed across the Mexican border, killing bosses or cashing in hall passes. It’s all about trying to make it believable within myself and believable with whoever my scene partner is.

CB: So, you have eight movies coming out this year, you were a writer/actor on SNL for 10 years, and you just produced your first film. Is there one hat that you prefer to wear over the others?
JS: No, not really, I sort of just do what I do. I think it comes from the virtue of getting to work at a place like SNL. First as a writer and transferring over to the cast where Lorne Michaels gives people [a chance] who have never worked in film or television, and it’s an irresponsible move by his part. He allows them to go script to screen basically from Monday to a Saturday on his television program that he created 40 years ago, without much influence. Through the repetition of doing  week after week of SNL, sketch after sketch of developing these muscles where you go from the micro to the macro, I don’t want to say effortlessly, but at least with more ease than if I came into those situations without that opportunity.

CB: Yeah, they say that doing Saturday Night Live is some of the greatest training ground anyone can hope for. Did you find that to be the case?
JS: It’s a profound experience. It may sound like I’m being cute by saying it’s irresponsible, but you have to think about it from a business model. Lorne is head of a studio, head of a network all within his own tiny empire. Vast, obviously, but tiny compared to Comcast. And for him to do that... like for me, never having written anything for televisionm and then I get a sketch on with Jack Black the very first time I wrote something for television. Or the week after that with Justin Timberlake, and then it being exactly what I wrote on a late Tuesday night. It’s having my dream job, but also my nightmare job because there is no way I belong here because heroes of mine have worked here. It beats the impostor syndrome out of you by creation and destruction, week after week you get used to it. It’s also this amazing opportunity to see people get to deal with new fame and how that can affect one’s art. I stayed there ten years by virtue of the fact that I wasn't let go, but also it demanded that much of my time and creativity and desire as a fan to want to be around that. And my generation was exceptional, I was flattered and humbled. The 40th was emblematic of all that. I think everyone felt that and you think it was one of the things that transferred at home. To be there that night really felt like we all belonged. I think everyone in our generation hoped the current cast felt that way too. You can’t help after graduating... and I know Lorne doesn't necessarily love that term because you can’t really ever graduate as evidence with Tina coming back to play Sarah Palin as recent as a couple of weeks ago. You really carry it with you everywhere and it makes… I mean there is not a person alive these days that wasn't affected by that show or at least aware of it.

CB: On the heels of the Super Bowl and the primaries coming up, I’ve always wondered when you were on SNL was it hard to put your feelings towards someone that you don’t agree with or is opposing your team down for the sake of the job?
JS: It’s just as much with people who don’t share your personal politics or a host that, although they are big with the zeitgeist, you don’t agree with the way that they are affecting or infecting culture. I am not such a big enough fan of any one specific sports team that I can’t understand at the end of the day, they are just a human being doing a job. Too many people swap teams. You know that great Seinfeld bit where you hate a guy one season and then he comes to your team and you are basically cheering for clothing. So I sort of share that sentiment through his comedic wisdom. So you can’t help, with any living person, being, entity whether it’s a dog, or a tree, or a person who shares the absolute opposite politics of you.  Assuming that they aren’t you know... psychopaths the more time you spend with them, you can’t help but see the humanity in them. I would say I was even charmed by Sarah Palin! Believe it or not in 2008, when she was there. You are kind of like ‘Oh what? Oh no!’ Doesn’t mean you’re going to vote for her, but at the same time you see a human being there.

CB: My final question, even though your character ruined feminist weekend on Portlandia, do you Jason Sudeikis, consider yourself a feminist?
JS: Very much so. Yeah. For sure. At its truest sense, I believe that males and females should be treated equal and everybody being valued as such with the lights off when it’s just bones and soul.

Tina Fey Reveals Which SNL Star Called Her The C-Word