Did You Know End-of-Life Planning Looks Different If You're A Person With A Fat Body? 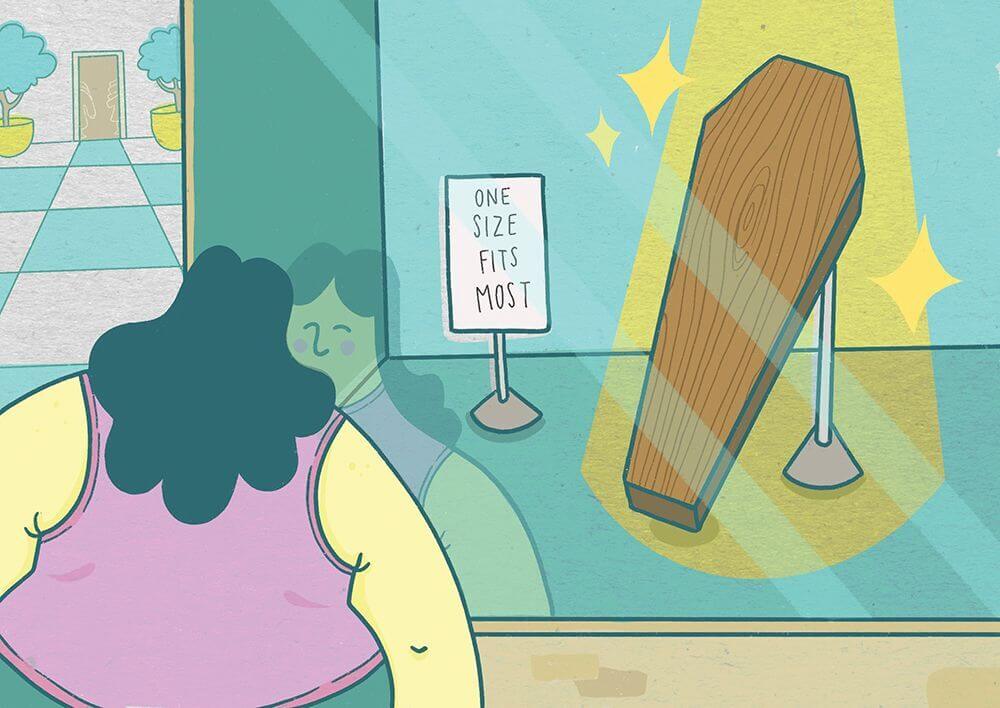 The English Poet John Donne said, “Death comes equally to us all” (true) and “makes us all equal when it comes.” Mmm, questionable. I’m guessing Donne wasn’t fat, ’cause it turns out, the typical Western rituals around death and burial can be challenging for fat folks and their families, and are often more expensive, too. Caitlin Doughty, of “Ask a Mortician” fame and a major player in the death-positive movement, first hipped us to this, and here, she walks us through what fat people, and those who love them, should consider when end-of-life planning.

It starts with awareness.

“Fatness can be cruelly associated with death in media and social media. But ‘death’ as an abstract concept or moral judgment is different than the realities of the funeral system,” Doughty says. “These realities are almost never discussed, even though a family’s experience can be wildly improved by doing so.” The end goal, of course, is dignity in death, and a process that respects both the deceased and their loved ones.

Plus-size people often pay more for everything from flights to fashion. That doesn’t stop when your heart does. If a body does not fit into the “standard” casket (the interior width of which is about 24 inches), an “oversize” casket can run about $500 more. A larger casket also requires a bigger cemetery plot, which can be difficult to find. Ideally, Doughty says, the cemetery will “work with the family to do everything they can to not have them buy two plots,” which, of course, would cost double the money. All told, a fat person looking to go the conventional embalming, casket, and burial route is “likely looking [to pay] several thousand dollars more.” Cremation, an option now chosen by more than half of Americans, will also cost more. “Most crematories will charge several hundred dollars for each 100 pounds over 250 pounds,” Doughty says, because of the additional natural gas and time the process takes. Though most modern cremation machines are designed to cremate bodies up to 750-plus pounds, Doughty suggests making sure “the crematory you choose has the right kind of accommodation.”

A green burial—when the body is interred in soil with the intention of biodegradation, kind of like composting—takes size out of the equation. “It removes some of the stigma around ‘standard’ caskets, vaults, and burial plots not fitting,” Doughty says. “It’s a hole in the earth! Who cares if some bodies need a slightly larger hole to be buried in?” Just keep in mind that although this type of interment is typically cheaper than a conventional burial, it is more expensive than cremation. This article on the "death positive movement" can point you in the right direction.

Even expected deaths can be traumatic for those left behind, and finding out about additional charges, or worse, that a funeral home can’t accommodate the wishes of the deceased, just adds to the stress. “The more openly fatness is talked about in the death-planning conversation, the less it has to be a potential point of tension,” Doughty explains. An understanding and knowledgable death doula might be helpful in the death-planning process. That’s when, she says, “beautiful stories and beautiful funerals happen.” –Lisa Butterworth