New To Witchcraft? Here's a List of 10 Modern Day Witches To Get Into on TikTok

Details
BY Mikaela Revard
IN Living
Published: 31 May 2022 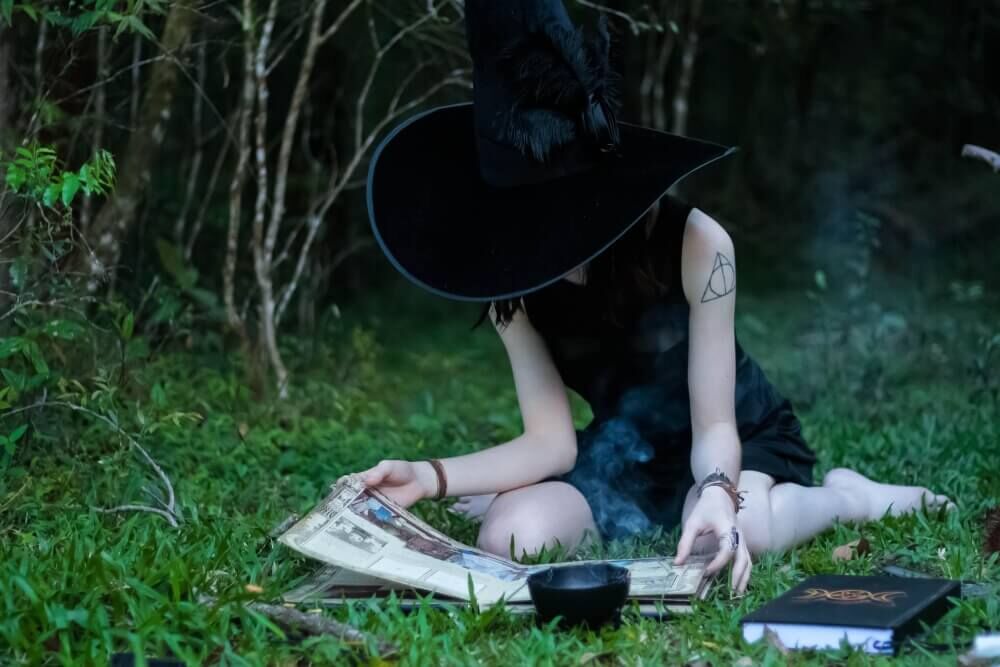 My neighbors probably hate me.

This morning I opened my front door, lit some incense, and grabbed some pots and pans. One would naturally assume I would start frying an egg for breakfast, but my intentions were quite different (much to my neighbor’s demise). Once I felt ready, I began to clang the metal pots together, creating a powerful noise that vibrated in my hands. It could have been my imagination, but the air felt cleaner. Maybe my ancestors were onto something; maybe this really does cleanse the atmosphere of evil spirits.

I’d heard something of this practice in passing, but it wasn’t until I watched a video from a fellow Christian witch on TikTok that I thought to do it. @srazzi97 is a Christian practitioner with over 19,000 followers that focuses on Slavic folk magic. Her videos are witty, charming, and insightful enough for me to incorporate her advice into my own practice. And if there’s anything I love to do, it’s banish evil spirits and annoy my neighbors at the same time.

Undoubtedly, the rise of witchcraft has entered mainstream society and it could be said that TikTok is responsible for it. The hashtag #witchcraft has over 9 billion views on the app, making it one of the most expansive online communities. The hashtag is full of spells that could help you find love, money, or success and – depending on your situation – even hexes or curses.

But it’s not just incantations that #WitchTok has to offer. There’s all sorts of magical advice being given – for free – to anyone who’s interested. #BabyWitch has a whopping 2.7 billion views, catering to witches who have just started out in their practice and in need of counsel from elder witches. A hugely popular request is information on crystals; which can be submerged in water (we wrote an article about bath rituals here!), how do you “charge” them, and how do you know which are real? Whatever your question may be, #BabyWitch probably has it covered.

I started off my personal journey with very little knowledge. #WitchTok helped me integrate into a digital community and receive tons of assistance when I felt completely lost and staring blankly at my crystals thinking, “What the hell do I do now?” But after over a year’s worth of esoteric knowledge under my belt, I can safely say that – while it’s important to do research on all platforms such as books – TikTok does have valuable knowledge.

I’ve compiled a list of people I watch on the daily as recommendations.

Sarah is a Slovene-American Christian witch. She has a unique sense of style in today’s world, donning long skirts and Slavic-styled shawls, and it all adds to her mysticism.While I haven’t been following Sarah for long, I’m already obsessed with her channel due to my love for Slavic culture. She discusses the Baba Yaga archetype, kitchen witchery (cooking with a magical twist!), and interviews pagan gods through the use of tarot.

It doesn’t take an elder witch to know that witchcraft has a long and complicated history, but Christian magic is a subject that tends to rub people the wrong way. Lina is a master when it comes to theology in Christian witchcraft, such as the Abrahamic Pantheon which are “-entities or deities that come from the Abrahamic texts and religions,” Lina says in one of her videos. Like me, she once belonged to the Evangelical community so her religious trauma is something myself and many others are able to identify with. By reflecting on this past life of hers, she’s able to offer support and guidance for those recovering from toxic Christianity – not just new witches. Lina also has a podcast called The Jesus Witch Podcast on Spotify so give it a listen!

Christian practitioners aren’t the only people I find myself drawn to. Even though I personally only worship Yahweh, I know that all cultures and practices are valuable to my growing as a witch. Here are some of my favorite witches that don’t necessarily follow the Christian god.

@chaoticwitchaunt some (folk) witchy tips that i wish i knew at the beginning of my practice! (u don’t have to be a witch to do some of these 🥰) #folkmagic #folkwitch #practitioner #washurdoors ♬ Amas Veritas - Alan Silvestri

Frankie is arguably one of the most popular witches on TikTok. In fact, they may be one of the reasons WitchTok is so popular. Their follower count is a whopping 1.4 million and they just released a book called Spells for Change. Last year, I was a practicing Hellenistic witch (meaning I specifically worshiped the Greek gods) so I needed to find elder pagan witches to learn from. While Frankie didn’t teach me directly, their expansive knowledge is pretty legendary – they’ve been interviewed by numerous news outlets such as The Daily Mail or Nylon. Frankie works with Italian folk magic and they’re a firm devotee of Diana, the Roman goddess of animals. If you feel inclined to, go check out their book on Amazon!

Mara is an excellent source for Fae study – meaning fairies. She schools people on fairies: what kinds there are (I had no idea there was more than one specific kind of fairy before her), what their temperaments are like, and what to gift them. Mara teaches us a whole new interpretation of what we always thought was tiny people with glittery wings. Mara is also a kitchen witch who devotes herself to the religion known as Wicca – a faith that revolves around the sacredness of nature (among a slew of other theologies). Mara’s videos show her as a friendly, sprite-like entity as she bakes with a twist of magic by using specific herbs depending on her intentions. For example, she’s baked cookies using lavender and lemon; lavender being used to promote joy and lemon to represent healing. Her role in the community is nothing to scoff at – the witchy mama has at least 148,000 followers and the number continues to grow. Mara has a shop in which she sells loose leaf tea and crystal infusers, too!

Something I really love about Kylin is her energy. She’s one of the most positive witches I’ve watched on TikTok and you can see it in all of her videos. While her channel is primarily tarot readings, she has a fun shop where you can buy crystal bracelets and oversized crystal towers. Kylin is a firm believer in gratitude and lightworking – an umbrella term that means using your gifts for good and spiritual growth. Sometimes we just need a pep-talk and Kylin is just the person for it.

Gabrielle tells it like it is even if it makes you uncomfortable – especially when it comes to astrology. Not only is Gabrielle hilarious, but her humbling translations of your “big three” signs – which are your sun, rising, and moon – can snap us back into reality.  For example, she once said that the top five signs that “do not forgive and forget” are Leo, Aries, Cancer, Virgo, and Capricorn. Gabrielle’s passion and dedication to this niche in witchcraft is her specialty; needless to say, I’ll take her word for it.

@theglamourwitchla It’s Happening!✨🤩💕 This is one of my favorite OG spells and one of the most effective🥂✨ Part Two is on the way🤑💵💫#witch #sugarbae ♬ Fashionable and retro HIPHOP BGM(881868) - Oren

Glamour magic is very real and Alexis Nicole Jackson is an embodiment of it; think of it like embedding magic in your makeup routine with incantations that suit your needs. With at least 90,000 followers, her channel is filled with videos on how you can take your style or beauty routine and infuse it with magic to benefit you. If I could describe Alexis in any way it would be that she’s versatile. Her shop is full of oils and candles to manifest whatever need be, taking an ancient art and making it accessible for modern women. Do you need money? She has a prosperity kit that contains a manifestation candle, oils, and a gemstone to help you out. Alexis also offers a class that can teach you to manifest money through magic and rituals.

Myla popped up on my “for you page” last year when I was just starting out my spiritual journey. The first thing that grabbed my attention was the softness of their voice and how relaxing it was. I hadn’t heard a person sound that gentle since my grandmother when I was a child. Their videos range from tarot readings to the explanation of angel numbers (a repetition of numbers, usually in threes, that have been sent to you by higher beings). Sometimes, we need to hit the pause button in our life in order to reboot and sometimes that can mean surrounding yourself with content that’s gentle and affirming. Myla – being as uplifting as they are – is the perfect person for the job.

@tempuraapples I use this to wipe down the frames and bases of outdoor doors. The spray has a shelf life of about 3 days #witchtok #manifestation #cleanse ♬ Sunny Day - Ted Fresco

Temperance Alden has made a name for herself in this community since before WitchTok. Because she is a generational witch – meaning that she grew up with folk magick as a child and learned it from her own family members – she has grown popular online for her sage wisdom and knowledge she shares on Twitter and her Podcast FolkCraft. Temperance was one of the very first witches I followed on every form of social media and I can’t  help but continue to gobble up every inch of knowledge she shares. She is also the author of Year of the Witch – a book that explores how witches can harness the seasons to their advantage. As a master in folk magick, her videos discuss oils and candle dressing, which is a process regarding how one can use candles in their practice regarding color theory - how green represents money and black represents protection. Temperance still uses TikTok but her preferred form of social media is Instagram where she goes by the username @wildwoman_witchcraft.

As a self-proclaimed “eclectic witch” (meaning she focuses on more than just one niche of witchcraft) FairyTarotGoddess stays true to her word. She dabbles in tarot cards and even Reiki. She discusses reincarnation and the Fae while also sharing her own experiences with the deities she works with!

Sometimes, the greatest information a witch can receive is the personal experiences of fellow witches. This is why I believe WitchTok is a blessing to the modern practitioner. Happy spell-casting!