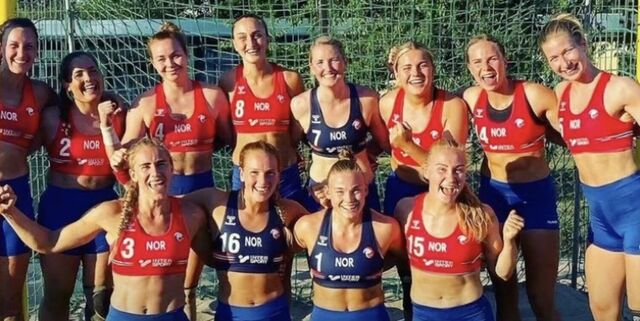 The Norwegian women’s beach handball team was fined €1500 (about $1765) on Monday for refusing to wear bikini bottoms.

In the Euro 2021 tournament’s bronze medal match against Spain, the Norwegian women decided to wear elastic shorts in opposition to the International Handball Federation’s requirements that women handball players wear bikini bottoms “with a close fit and a cut on an upward angle toward the top of the leg. The side width must be a maximum of 10 centimeters.”

The men’s teams on the other hand are allowed to wear shorts, with the IHF requiring only that the shorts, “if not too baggy, can be longer but must remain 10 centimeters above the kneecap.”

While playing in Norway, the women’s team is allowed to wear their preferred uniform of shorts, but when playing internationally they must adhere to the IHF’s guidelines on uniforms.

According to NBC News, the team had requested that they be allowed to wear shorts for the tournament but was turned down and warned of a fine or disqualification if they did not wear bikini bottoms. In a spur-of-the-moment decision to take a stand, the team wore the shorts anyway.

Each player was subsequently fined €150 (about $177) by the European Handball Federation.

According to the New York Times, “Kare Geir Lio, the head of the Norwegian Handball Federation, said the organization would pay the fine. He said Norway had repeatedly complained about the bikini bottom requirement to the international federation since 2006,” but with no results.

The IHF will meet in November and Norway plans to submit a motion to change the uniform rule at that time.

This is not the first uniform controversy surrounding female athletes, who often have to follow stricter uniform requirements than men, a glaring double standard across sports. Expect this issue to be discussed more in the next month as the Tokyo Olympics put sexist athletic uniforms on full display.

Olympian Madeleine Groves Drops Out Of Olympic Trials, Telling "Misogynistic Perverts": "You Can No Longer Assault Young Women And Girls"