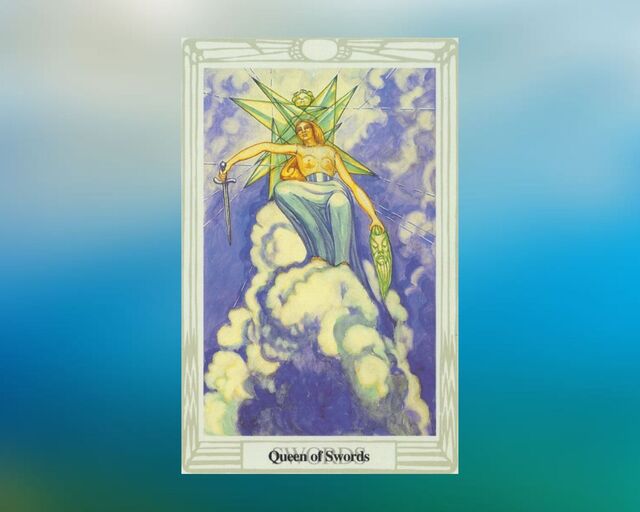 There are 4 elements of the tarot: Fire (wands), air (swords), earth (pentacles, or coins), and water (cups). Each element is lauded over by a King and Queen, who represent the most righteous form, the pinnacle, of each element’s power. Kings are great and all, but yawn, patriarchy. The Queens of the tarot channel feminine energy and are known for approaching problems with intuition and inner strength rather than the blunt force of the Kings.

In this four-part series, we feature one Tarot Kween each week with a corresponding playlist comprised of women and non-binary artists. You can use these playlists for your own tarot readings, or just to vibe on some glorious otherworldly femme energy.

Hold on to your hats, y’all. The Queens are going out with a BANG in the form of the metaphorical bullet that is the The Queen of Swords. This Queen rules over the element of air, which is associated with intelligence, confidence, spirituality, and matters of the mind. This Queen rules over the highly masculine swords, and we all know how easy it is to be a woman in a dude-dominated industry. The Queen of Swords is clever, psychic, and open-minded.

This Queen spends a lot of time in her own head. While she conjures vivid, delicious magic, she also then can tend towards neuroticism or distress. The Queen of Swords reminds us that like elements in the tarot, perceived strengths come with perceived weaknesses: the eternal balance. The Queen of Swords has such complex higher-order thinking skills that she can intimidate mere mortals with her unique brain. She often manifests in those with diverse cognitive abilities, such as anxiety, depression, autism, and bipolar spectrum diagnoses, as well as other learning differences.

The Queen of Swords’ independence and intelligence help carry her through the dark nights when her brain gets away from her. In addition, the Queen’s spirituality supports her mental fortitude. The Queen of Swords may or may not subscribe to a specific religion, though she always recognizes the value of regular mindfulness. Whatever your practice (prayer, meditation, Ouija board slumber parties), let the Queen of Swords remind you that spirituality should nurture and benefit your mind rather than cause it further distress.

To any complex women that have been called “crazy” by a one-dimensional cisgender dude, the Queen of Swords reminds you that you are exactly who you need to be. She is the quirky oddball in the group, but she DGAF that she’s different. Sometimes her brain and mouth struggle to keep up with each other, but you should listen whenever the Queen of Swords is speaking because her words will be full of magic even when it's incoherent. With the superpower of her weird, unique (and often brutally honest) brain, the Queen of Swords can accomplish anything.

Tags: Queen of Swords , tarot cards , tarot reading , tarot reading music , air element , spirituality , tarot playlist
Support Feminist Media!
During these troubling political times, independent feminist media is more vital than ever. If our bold, uncensored reporting on women’s issues is important to you, please consider making a donation of $5, $25, $50, or whatever you can afford, to protect and sustain BUST.com.
Thanks so much—we can’t spell BUST without U.