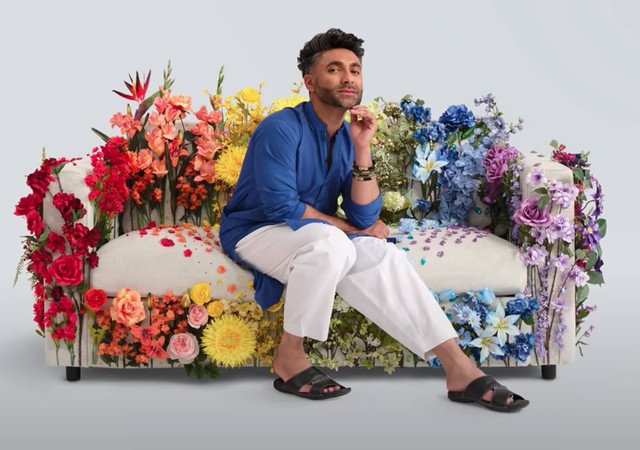 IKEA is finally catering to the demands of the queer community! For too long couches have remained an exclusively hetersexual and cisgender luxury, denied to LGBTQIA+ folks since the invention of furniture. For countless centuries, leaders and activists have cried out for justice and IKEA has stepped up to the plate, introducing the totally asked for and definitely necessary Love Seat Collection.

The artists took inspiration from the Pansexual, Transgender, Bisexual, Asexual, Lesbian, Nonbinary, Genderfluid, Two-Spirit, and Progress flags. The phrase “There's more to Pride than a rainbow” is used throughout the campaign, which embodies the intention behind the collection. Rather than just slapping rainbows on everything without thought, like so many big corporations did during Pride month (a well-known and shameless attempt at capitalizing on the holiday), IKEA has made efforts to represent the full range of identities existing under the 2SLGBTQIA umbrella. 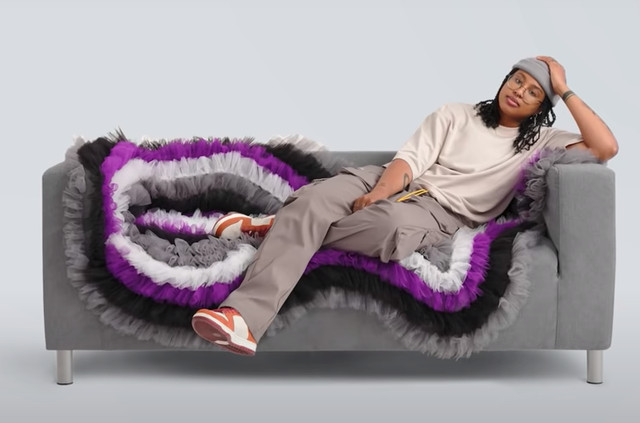 The company intends for these couches to act as "a platform to celebrate identity and share stories of love.” The release of this wonderfully gay furniture also included testimonies made by members of each facet of the 2SLGBTQIA cohort while they were seated quite comfortably on their respective Love Seats.

IKEA may not have given queer folks what they WANTED, but it certainly gave us what we needed. The designs are innovative, exciting, and certainly out of the box. I am particularly fond of the Pansexual Love Seat Design and find both Transgender Love Seats to be so cute. 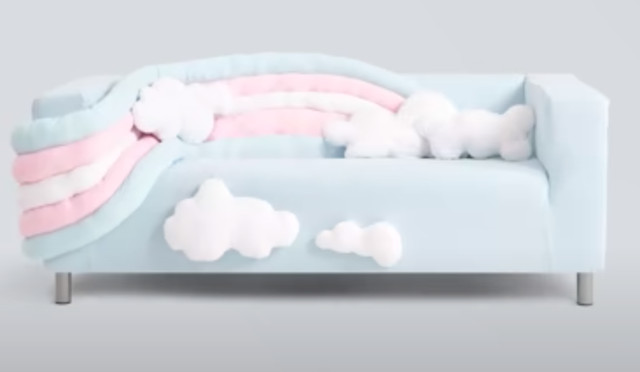 As heartwarming as the concept is, Twitter did not spare this Love Seat Collection it’s infamous onslaught of jokes and meme-worthy content. Many were particularly questioning the bisexual couch, which has the phrase “When you change your or to and, nobody believes you,” splayed across the back cushions of the couch, along with a smattering of pink, purple, and blue hands covering the entire couch.

This couch design is notably different from it’s siblings, as it’s the only one to include words. One person on Twitter said: "I both love and hate the bi couch. Somehow the words are my least favorite part. They're weird and make you think about biphobia, whereas the other couches are just pretty." Not to mention the hands that protrude out of the arm rests like something out of a bubblegum horror flick.

okay the bisexual ikea couch is odd can we talk about the nonbinary bondage couch now pic.twitter.com/5QsAIELCVm

Despite the endless — albeit good-natured — internet heckling, this effort at inclusivity was well received by the public. Sure, the bisexual couch is the stuff of my queer nightmares and the Progress Flag couch is basically unusable, but I still kind of want one. In fact, many people are pretty bummed that this collection isn’t currently available for purchase. Maybe if we stop bullying the couches, IKEA will let us buy them. But, in the meantime, we will have to admire these very odd additions to Pride from afar.

Solange Is Collaborating With IKEA, And We Are Ready To Redesign Our Homes

Tags: IKEA , Love Seat , Pride , LGBTQIA , 2SLGBTQIA , Lesbian , Gay , Bisexual , Pansexual , Queer , Two Spirit , Transgender , queer furniture
Support Feminist Media!
During these troubling political times, independent feminist media is more vital than ever. If our bold, uncensored reporting on women’s issues is important to you, please consider making a donation of $5, $25, $50, or whatever you can afford, to protect and sustain BUST.com.
Thanks so much—we can’t spell BUST without U.