Olympian Activist Gwendolyn Berry Turns Her Back During National Anthem: "The Anthem Doesn't Speak For Me. It Never Has." 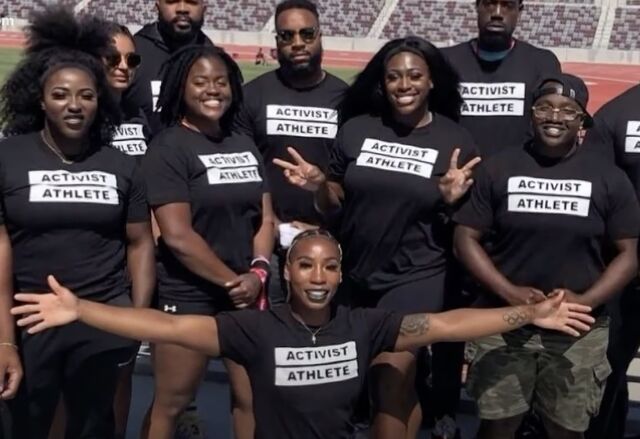 Athlete and activist Gwendolyn Berry is taking a stand in the opposite direction of the American flag.

At the Olympic trials on June 26th, the newly qualified track and field Olympians were standing on the podium when “The Star Spangled Banner” began to play. Gwendolyn Berry (at bottom center in photo above) turned to face away from the flag and draped a t-shirt with “activist athlete” printed on it over her head.

The hammer thrower and 2016 Olympian, known for her political activism, has been demonstrating during the National Anthem since at least 2019, when after winning gold at the Pan American Games, she raised her fist during the song -- actions for which she was sanctioned by the US Olympic and Paralympic Committee and lost sponsorships, an important source of income for athletes.

Berry says she was told the anthem would be played before the athletes went onto the podium and according to CNN said, “I feel like it was a setup, and they did it on purpose.” She went on to state that “I don’t really want to talk about the anthem because that’s not what’s important. The anthem doesn’t speak for me. It never has.”

The USA Track and Field spokesperson, Susan Hazzard, said “We didn’t wait until the athletes were on the podium for the hammer throw awards. The anthem is played every day according to a previously published schedule.” Most days, the anthem is set to play at 5:20 p.m. At the trials on Saturday, it played at 5:25 p.m., according to ESPN.

The “Star Spangled Banner” was written in 1814 by Francis Scott Key, a man who used his political power to enforce strict slave laws, punish abolitionists, and get a man who would later write the Dred Scott decision appointed to the role of chief justice on the Supreme Court. The song itself has verses that contain lyrics that -- while no longer in popular usage -- are racist, and a reflection of the overtly racist man who penned them.

Sha'Carri Richardson Is The Newest Olympian And The Fastest Woman In America: "I Just Want THe World To Know That I'm That Girl"

Olympian Madeline Groves Drops Out Of Olympic Trials, Telling "Mysoginstic Perverts": "You Can No Longer Exploit Young Women And Girls"

Poltical Protest Ban At 2020 Olympics Will Not Silence Megan Rapinoe

Tags: Gwendolyn Berry , Olympics , Olympic trials , National Anthem , Taking a knee , track and field , race , activist athlete , hammer throw
Support Feminist Media!
During these troubling political times, independent feminist media is more vital than ever. If our bold, uncensored reporting on women’s issues is important to you, please consider making a donation of $5, $25, $50, or whatever you can afford, to protect and sustain BUST.com.
Thanks so much—we can’t spell BUST without U.