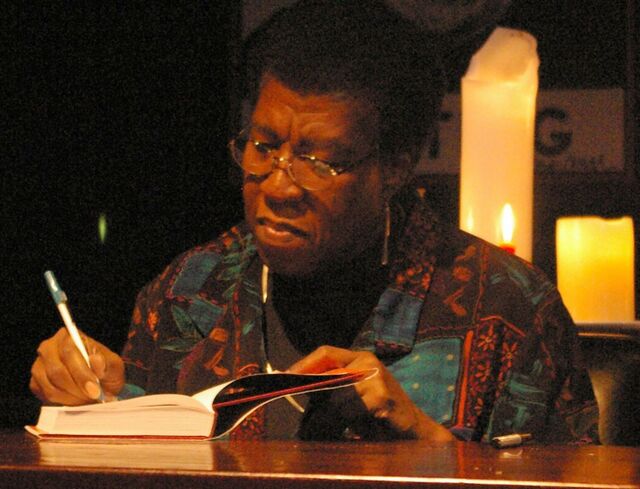 June 22 is Octavia E. Butler’s birthday! Butler was a renowned Black author who wrote groundbreaking science fiction, Afrofuturist, and feminist books. She received a MacArthur “Genius” Grant and PEN West Lifetime Achievement Award for her work, among many other notable recognitions and accolades. She was the author of several best-selling, award-winning novels, including Kindred (1979), Parable of the Sower (1993), and Fledgling (2005). Butler passed away at the age of 58 in 2006; she would’ve been 76 years old today. In honor of Butler’s birthday, here are four lessons to be learned from her life and work.

1. Consistency and practice are key to honing your craft.

Butler began writing at the age of 10, but it didn't come easy to her. In her earlier years, she would wake up at 2 a.m. every day to write, all while working as a telemarketer, potato chip inspector, and dishwasher, among a series of other temporary jobs. She would often hold herself accountable by creating strict writing schedules and making promises to herself that she tried not to break.

In a 1997 interview in Callaloo, she spoke about the importance of creating a writing routine and sticking to it, as well learning and practicing your craft, despite the inevitable rejections and hardships that come with the journey: “I had to learn my craft. And I mean I had to learn it, bit by bit, by doing things wrong, and by collecting years and years of rejection slips. But I kept writing because I liked doing it,” she said. “I say to students, anything that doesn't dismember or kill you will probably come out in your writing. You go on learning to write for as long as you live and write. If you don't do this, if you're not willing to do this, you might want to be a writer, but you don't really want to write.”

2. Healthy escapism can be healing—and it can open doors to future passions.

Growing up, Butler was an extremely shy, socially awkward child. She struggled to socialize with other kids her age and experienced a lot of bullying. As a result, she turned to reading and writing as an outlet. Butler would often pass the time by visiting the Pasadena Central Library, where she read fairy tales, horse books, and eventually science fiction. Going to the library sparked her interest in science fiction, the very genre she would later influence and redefine as a prominent Black sci-fi literature author.

“By the time I was ten, I was writing, and I carried a big notebook around so that whenever I had some time, I could write in it. That way, I didn't have to be lonely. I usually had very few friends, and I was lonely,” she said in an interview. “But when I wrote, I wasn't [lonely], which was probably a good reason for my continuing to write as a young kid. I read a lot also, for the same reasons.”

3. Telling our own stories is powerful.

Many of the science fiction books Butler read were predominantly written by white male authors, with very few non-white, female characters. Even now, the genre still lacks diversity and representation. As a Black woman author, Butler often questioned whiteness in sci-fi and discussed the intersection of race and representation within the genre.

“Blacks, Asians, Hispanics, Amerindians, minority characters in general have been noticeably absent from most science fiction. Why?” she asked in “The Lost Races of Science Fiction,” an essay she wrote in 1980. “And as for whites representing all of humanity—on the theory that people will imagine other races; or better yet, on the theory that all people are alike anyway, so what does it matter? Well, remember when men represented all of humanity? Women didn’t care much for it. Still don’t. No great mental leap is required to understand why Blacks, why any minority, might not care much for it either. And apart from all that, of course, it doesn’t work. Whites represent themselves, and that’s plenty. Spread the burden.”

Despite the visible absence of female and Black characters within science fiction, Butler aimed to close those gaps by "choosing to write self-consciously as an African-American woman marked by a particular history"—which she later termed as "writing myself in,” according to The New York Times. Butler’s stories, therefore, were typically written from the perspective of a Black woman.

4. Be your own cheerleader.

Butler developed a lifelong habit of uplifting herself through motivational notes. She would write them in journals, planners, the inside covers of notebooks, along the margins of lined loose leaf paper, and on repurposed pages of old wall calendars. She used her motivational notes as affirmations, many of which were spoken (or in this case, written) into existence.

“I shall be a bestselling writer. After Imago, each of my books will be on the bestseller lists of LAT, NYT, PW, WP, etc. My novels will go onto the above lists whether publishers push them hard or not, whether I’m paid a high advance or not, whether I ever win another award or not.

My books will be read by millions of people!

I will buy a beautiful home in an excellent neighborhood.

I will send poor black youngsters to Clarion or other writer’s workshops.

I will help poor black youngsters broaden their horizons.

I will help poor black youngsters go to college.

I will get the best of health care for my mother and myself.

I will hire a car whenever I want or need to.

I will travel whenever and wherever in the world that I choose.

My books will be read by millions of people!

Butler's work has been taught in hundreds of colleges and universities nationwide. Years later, her writing continues to captivate readers. Here's to Butler, her birthday, and her incredible legacy.

Get Ready for Battle With The Gilded Ones: A YA Fantasy Novel Reminiscent of Octavia Butler

Tags: Octavia Butler , science fiction , Afrofuturism , Black writers , Black feminist books , Kindred
Support Feminist Media!
During these troubling political times, independent feminist media is more vital than ever. If our bold, uncensored reporting on women’s issues is important to you, please consider making a donation of $5, $25, $50, or whatever you can afford, to protect and sustain BUST.com.
Thanks so much—we can’t spell BUST without U.