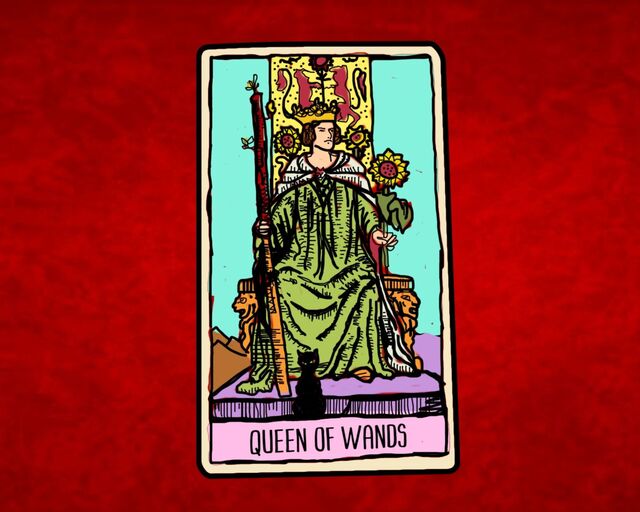 There are 4 elements of the tarot: Fire (wands), air (swords), earth (pentacles, or coins), and water (cups). Each element is lauded over by a King and Queen, who represent the most righteous form, the pinnacle, of each element’s power. Kings are great and all, but yawn, patriarchy. The Queens of the tarot channel feminine energy and are known for approaching problems with intuition and inner strength, rather than the blunt force of the Kings.

In this new series, we feature one Tarot Kween each week with a corresponding playlist comprised of women and non-binary artists. You can use these playlists for your own tarot readings, or just to vibe on some glorious otherworldly femme energy.

The Queen of Wands knows who she is and she’s ready for you to worship her. The Queen, like most astrological fire signs, is known for her vibrancy and unbridled creativity. However, this level of passion comes with a warning: this Queen isn’t a turn-the-other-cheek kind of lady. This bitch will hunt you until the end of earth or until you pay for the pain you caused.

In addition to her sexual energy and straight-up feline prowess, the Queen of Wands carries her irresistible charm to every angle of life. At work, she gets you to do her bidding and you don’t even realize it. She is not necessarily calculating or even prepared, but somehow she keeps rising.

To channel the Queen of Wands, embrace fire and raw energy. Wear red lipstick, light a bougie candle, fire up that blunt, dance topless in the sun. Soak up the radiant energy of you. You are the fire.

Use the playlist below to help you channel some of that glorious otherworldly fire femme energy.

Tarotscopes: Your Summer Horoscope Inspired By The Tarot

Tarotscopes: Your Spring Horoscope Inspired By The Tarot

A Guide To 2021’s Full Moons and Their Magickal Meanings

Tags: Queen of Wands , tarot playlist , tarot cards , fire signs , hearth witch Brigid , witchy playlist , fire sign playlist , tarot readings , astrology
Support Feminist Media!
During these troubling political times, independent feminist media is more vital than ever. If our bold, uncensored reporting on women’s issues is important to you, please consider making a donation of $5, $25, $50, or whatever you can afford, to protect and sustain BUST.com.
Thanks so much—we can’t spell BUST without U.