Don't Forget Your Story: Why Kink Will Always Belong in Pride 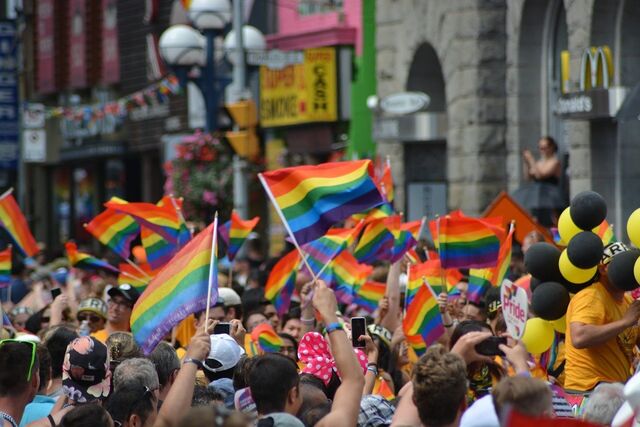 The thunder vibrated up through the soles of my feet, and the exhaust pipes blasted through my ear drums, rattling my skull. Like a swarm of black hornets in the distance, I watched them rolling in. It was the Dykes on Bikes, the official protectors, and historic leaders of the pride parade.

This witnessing occurred at my first Pride parade, which I attended by accident my junior year of high school. My parents and I had driven up to San Francisco from Los Angeles to visit my guncles on an early June weekend. On our way to lunch, it was suggested we “stop by the parade.” Before arriving, I had no preconceived notions of the Pride parade or myself standing adjacent to that much queer energy. At 14, I wasn’t awake to my full sexuality or desires. It just felt like a San Francisco bucket list activity.

As the motorcycles barreled towards us, I shoved myself forward, pressing my body onto the edge of the parade gate to get a better look. At first, I was simply taken aback by seeing solely female and non-binary bikers. A split second afterwards, I noticed a more glaring sight: nipples, areolas, breasts, and leather. A large butch woman drove past us waving like a pageant queen, wearing a leather vest with her enormous tits draped out like a proud sash for all to see. A petite stud walked beside her in ass-less chaps, not wearing a vest or jacket, letting her pierced nipples lead the way. I stood and let the sea of new body shapes wash over me.

Until this moment, my eyes had spent a lifetime filled primarily with one type of female body: white, thin, big-titted, small-waisted, tight ass, and often with long straight hair. During the parade, I saw women, non-binary, and trans folks of all shapes and sizes in various degree of clothing walking in the open, waving, smiling, and celebrating. The men at Pride came in more diverse body types too; again, unlike the diet of cis male Americana I had been force fed through TV shows and movies. Before this moment, I believed that only one type of body was “allowed” to be on display to the masses and celebrated. It was a thrill to learn I had been taught wrong. An easy half hour passed as I stood staring as new possibilities walked by.

“Maybe we should head out and grab lunch,” my mom suggested. The adults in my life had seen Pride parades before. These adults had come of age in the 1970s, and seeing Dykes on bikes was not a priority over lunch. “Not yet!” I screeched while waving at a gaggle of 10-foot drag queens dressed as mermaids. Suburban legend has it one of my guncles glanced knowingly at my enthusiasm.

Pride is a celebration of self-identify and community, which includes sexual preferences. Allowing a space to celebrate specifically various forms of sexual pleasure is vital, especially when these desires have historically been criminalized and shunned. Bringing queer life into the light without policing it is the point of Pride. Queer folks have been policed for eons; now is not the time for queers to start policing one another.

For some, Pride may be a celebration of fetish; for others, this may be the celebration of a queer family including children. For others, it may be an acknowledgement of their gender identity. Hopefully, for many, it is a combination of it all.

We should not de-kink for the idea that children are pure and seeing anything remotely related to sex is harmful for them. Further, children do not need access to every space. Having a 2-year-old myself, I will not be bringing him to the main Pride parade this year; mostly because it’s become too corporate and I don’t want him to believe Wells Fargo actually cares about queer people and marginalized folks. It will also be too loud and frenetic; I know he won’t enjoy it because he’s two. I am not worried that he might see an elder gay walking a “pup” on a leash. My son loves dogs.

During my deep dive of rage reading, I came across an un-ironic tweet stating: “I didn’t consent to seeing you in leather.” Immediately, I wanted to rip my eyes out of their sockets, throw them into Hudson River, and never think about the internet ever again.

To conflate the actual notion of sexual consent with a grown person happily barreling down the street in a full body latex suit wearing a ball gag feels like such an offensive use of the word “consent” to me.

To require consent to view a person who is partaking in a self-designated space will never make sense to me. Never mind that I did not once in my life consent to being constantly shown an “appropriate” way to appear and engage in sexual activities as a woman. My whole life has been an unconsented viewing of what it means to be female. The same idea is true for men, i.e. toxic masculinity to the masses. In recent years, the media has representation for more types of bodies and sexual experiences, however, these representations continue to remain niche or atypical. Diverse is still not the “norm” in mainstream media.

Kink and fetish aren’t just about sex; they are a means to show the world there is another way to be. Humans are forever variant. If we allow the removal of kink and fetish out of Pride, what little authenticity that is left will be gone. The parade will be left with a Whole Foods float and the NYFD, which at that point, we might as well turn the whole thing into a summer solstices event and let Macy’s sponsor it.

If you don’t want to look at kink, then don’t come to Pride. But please crack a book or at least watch the new Hulu documentary on gay history so you understand why the expression of sexuality at pride is non-negotiable.

Top image by naeimasgary via Pixabay