Hair Art: The Morbid Trend That Dominated the Victorian Era 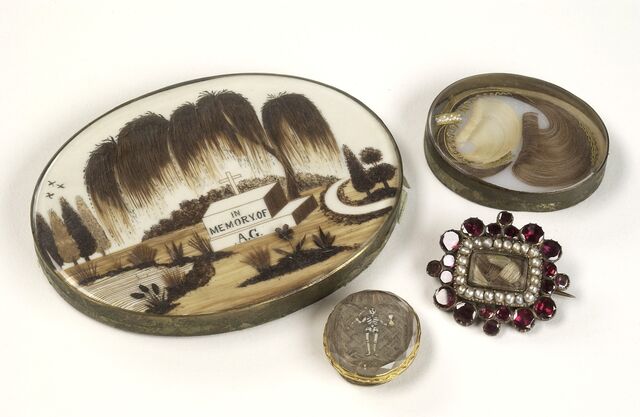 Disembodied hair triggers an almost subconscious reflex of disgust in humans. While natural when attached to a scalp, an errant strand floating in a bowl of tomato soup or a damp wad clogging up a shower drain is enough to send a shiver down even the strongest of spines. So why is it that, two centuries ago, loose hair—and often, hair cut from a corpse—was the key ingredient in a popular household craft?

The creation of art from human hair, or “hairwork,” reached its peak in the 19th century. “Hairwork” instructions and patterns were often featured in shops, ladies’ magazines, and “fancywork” books, so the trend became a popular parlor craft among middle-class white women of the Victorian era. According to Artsy, strands of hair were braided into bracelets, molded into loops to create floral patterns, and ground up for pigments. Human hair can keep its color for centuries without decaying, making it a sustainable material for use in art, jewelry, wreaths, and beyond.

In 1854, Wilkie Collins wrote that bracelets made of human hair were “one of the commonest ornaments of woman’s wear,” per JSTOR Daily. In Charles Dickens’ 1865 book Our Mutual Friend, the writer describes a man who wore a “decent silver watch in his pocket and its decent hair-guard round his neck [and] looked a thoroughly decent young man.” The full sentence featured seven “decent”s, indicating that Dickens believed a “hair-guard”—a watch fob made of hair—helped make a man very decent indeed. 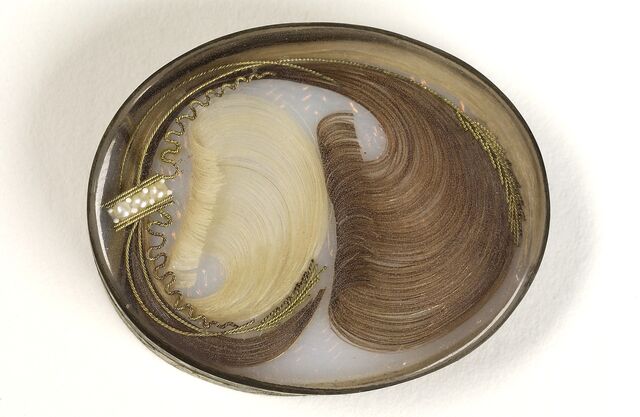 The trend grew in popularity in 1867, when a man named Mark Campbell published a book called Self-Instruction in the Art of Hair Work, Dressing Hair, Making Curls, Switches, Braids and Hair Jewelry of Every Description. The title reflects the length and detail of the manual itself, which was made up of 276 pages of instructions and illustrations. “Heretofore the Art of making these goods has been zealously guarded by a few dealers, who have accumulated fortunes, and would still retain it a profound secret but for the publication of this book,” Campbell wrote. “Persons wishing to preserve and weave into lasting mementos, the hair of a deceased father, mother, sister, brother, or child, can also enjoy the inexpressible advantage and satisfaction of knowing that the material of their own handiwork is the actual hair of the ‘loved and gone.’”

Infant mortality rates were high in the 1800s, so death was omnipresent. “Not only were people used to being around bodies that were dying and had recently died, but the kind of associations that we have today of the dead body being a gruesome thing or a frightening thing was a little different,” Dr. Helen Sheumaker, author of Love Entwined: The Curious History of Hair Work, told National Geographic. Throughout 19th-century England, women would make wreaths from the hairs of a single deceased person as a symbol of mourning, or from the hair of multiple family members, dead and alive, to form an unorthodox family tree.

In Emily Brontë’s 1847 novel Wuthering Heights, Heathcliff places a lock of his hair in the locket that hangs around the neck of his dead love, Catherine. “Rather than gathering a memento of Catherine for himself, Heathcliff sees to it that a material fragment of his body will go down into the grave with Catherine’s corpse, to intermingle with her flesh,” Deborah Lutz, Victorian literature scholar, wrote (via JSTOR Daily), adding that human-hair relics reflect a “desire to see death as not permanent, in that material remains might be proof that the loved one still exists somewhere, somehow.” 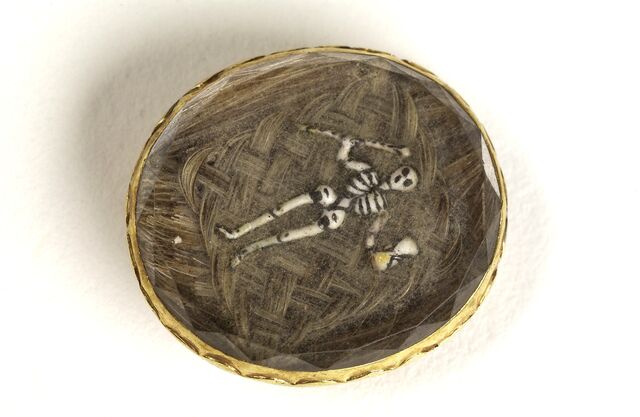 Hair art was present throughout the 18th and 19th centuries, but according to Emily Snedden Yates (via Artsy), “it wasn’t until the Victorian era that the ‘cult of the dead’ became almost a mania in Britain.” In 1861, Queen Victoria’s husband, Prince Consort Albert, died, leaving the queen shrouded in a dark period of mourning that would last until her own death. She had “at least eight pieces of jewelry made that incorporated Prince Albert’s hair,” per JSTOR Daily. The same year the prince died, the American Civil War broke out, resulting in a high death toll that further fueled “death culture” across the Atlantic.

Still, not all works of hair art had such morbid origins. In fact, most of the "hairwork" created throughout history has been rooted in a sweeter sentimentality. Mothers framed sweepings from their children’s first haircuts, friends exchanged locks like friendship bracelets, and others braided and framed strands alongside poems. “[It wasn’t] really about death, even when it’s in memorial to someone who died,” Sheumaker told National Geographic. “It’s about sentiment and emotion.”

Emotions were directed elsewhere once World War I began in 1910, and the hair-raising craft craze soon died out. In the century since, "hairwork" has taken on a new life. In the 1980s and ‘90s, feminist artists used hair from their own heads or those of fellow women to make statements about gender roles, per National Geographic. While Victorian hair art was unambiguously white, hair has long been used in African-American and African-diasporic art to express the Black experience, as beautifully exemplified today by artist Laetitia KY. And the next time you bristle at the tangled clumps in your hairbrush, you can follow Rookie’s direction and fashion them into a “CREEPY and BEAUTIFUL and semi-morbid” craft. Maybe the Victorians were on to something: human life is finite, but human hair is (almost) forever.