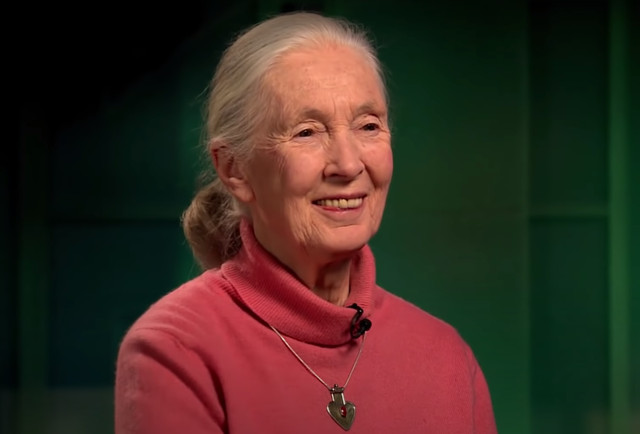 April 3 marks Jane Goodall’s 87th birthday. The primatologist and anthropologist’s work has deepened humans’ understanding of primates and empathy for animals and the natural world. Goodall is an inspiration not only for the major strides she has made in chimpanzee research, human rights, and environmental conservation, but also for the trailblazing example she set for women in scientific fields. When she began her work in primate research in the 1950s, the field was dominated by men. According to CBC, primatology now has one of the highest proportions of female to male scientists of any scientific field. In honor of Goodall’s birthday, here are five life lessons to be learned from her approach to work and life.

1. Your childhood delights may become your lifelong vocation.

Goodall’s path to her vocation began with a stuffed chimpanzee named Jubilee. “[He was] bought for me as a present by my father (Mortimer ‘Mort’ Goodall), when I was just over one year old,” she wrote in her 1999 memoir, Reason for Hope. “Jubilee was a large, stuffed chimpanzee toy, created to celebrate the birth of Jubilee, the first chimpanzee infant ever bought at the London Zoo. My mother’s friends were horrified by this toy, thinking it would frighten me and give me nightmares. But Jubilee instantly became my most cherished possession and accompanied me on nearly all my childhood adventures. To this day, old Jubilee is still with me, almost hairless from all the loving, spending most of his time in my bedroom in the house where I grew up in England.”

2. Reach out to people who share your goals and passions.

While working as a secretary in Kenya in 1957, Goodall called paleoanthropologist Louis Leakey in the hopes of meeting up to talk about animals. “Somebody said, ‘If you’re interested in animals, you must meet Louis Leakey,’” Goodall recalled in a 2009 interview for the Academy of Achievement. “I said I wanted to meet him, and he said, ‘Come to the [natural history] museum.’ [He] asked me all these questions, took me around. I think he was amazed that a young girl straight from England with no degree knew so much, because I had done what my mother suggested, I’d gone on learning about Africa. I read books, been around the Natural History Museum in London. So I could answer many of his questions, and he offered me a job just like that, boom, first day.”

Still, Goodall had something she needed to do for herself before she started the job: “I said, rather cheekily, I suppose, ‘Well, this is fantastic, but before I settle down to…’— because it was a secretary—‘…to work for you, I must get out into Africa. I must. I’ve come all this way and I must go out into the wild and see a lion.”

3. Surround yourself with supportive women.

Goodall credits her mother for pushing her to pursue her passions regardless of the odds being stacked against her. “I had a mother who not only tolerated but also encouraged my passion for nature and animals,” she wrote in Reason for Hope, “and who, even more important, taught me to believe in myself.”

During a 2015 lecture at the Brooklyn Academy of Music, Goodall recalled her mother’s encouraging response to a childhood incident. “I’m one and a half years old and she comes into my bedroom and I’ve taken a whole handful of earthworms to bed with me… with the earth as well, so you can imagine, the bed’s a bit of a mess,” she said. “Many mothers would have gotten angry… but she just said very quietly, ‘Jane, if you leave them here, they’ll die because they need the earth in the garden… A different kind of mother might have crushed the spirit of scientific curiosity, and I might not be standing here now.”

4. Lean into the divine combo of sweat and luck.

Goodall worked especially hard to get to her position in science, given the expectations and limitations placed on women at the mid-twentieth century. Still, she believes there were cosmic forces at work, too.

“Everything led in the most natural way, it seems now, to that magical invitation to Africa in 1957, where I would meet Dr. Louis Leakey, who would set me on my way to Gombe and the chimpanzees,” Goodall wrote in Reason for Hope. “Indeed, I have been extremely lucky—although as my mother, Vanne, always says, luck was only part of the story. She had always believed, as did her mother, that success comes through determination and hard work and that ‘the fault… is not in our stars but in ourselves that we are underlings.’ I certainly believe that is true. Yet though I have worked hard all my life—for who wants to be an ‘underling’ if it can be avoided!—I must admit that the ‘stars’ seem to have played their part too.”

5. Don’t take yourself too seriously.

Along with her paradigm-shifting primatology work, Goodall has long showcased her sense of humor and her willingness to be the butt of a joke. One of the greatest controversies of her career came in 1987, when Gary Larson created a Far Side cartoon that depicted a chimpanzee finding a blonde hair on another chimp and saying, “Been doing more ‘research’ with that Jane Goodall tramp?” Goodall was in Tanzania at the time, but the people of the Jane Goodall Institute had their lawyers draft a letter in response to the “atrocity.” Goodall herself shut the backlash down after seeing the cartoon and finding it amusing. She went on to write a preface to The Far Side Gallery 5, praising Larson’s knack for creatively highlighting humanlike behavior in wild animals.

More recently, Goodall appeared in a bit for a 2014 episode of Last Week Tonight with John Oliver, in which the pair discussed potential chimpanzee names. After approving of “Poothrow Wilson,” Goodall suggested tweaking the name to fit “people who I think need to have poo thrown at them,” landing on “Poothrow Hitler.” To conclude the interview, she demonstrated how to eat a banana “chimpways” (from the side and through the peel).

Goodall found her calling by tuning into her inner child, reaching out to and surrounding herself with inspiring people, working hard and getting lucky, and laughing along the way. Now, at a time when it feels easy to be cynical, she is hosting The Jane Goodall Hopecast, a Spotify podcast that, according to BBC, “offers reasons to be hopeful about the environment, wildlife and people in 2021.” Here’s to Goodall, her 87th birthday, and her ongoing and inspiring work in primatology and beyond.

Tags: Jane Goodall , Jane Goodall Institute , birthday , Last Week Tonight with John Oliver , Far Side Gallery , Reason for Hope , National Geographic , Hopecast
Support Feminist Media!
During these troubling political times, independent feminist media is more vital than ever. If our bold, uncensored reporting on women’s issues is important to you, please consider making a donation of $5, $25, $50, or whatever you can afford, to protect and sustain BUST.com.
Thanks so much—we can’t spell BUST without U.