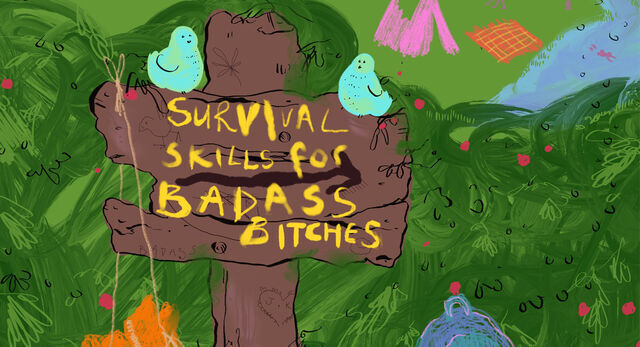 In the Survival Skills for Badass Bitches series, writer Melanie LaForce walks you through everything you need to know to survive the outdoors, tough situations, and/or the forthcoming apocalypse.

Some disclaimers: Use common sense. If you aren’t 100% sure what it is, don’t put it in your mouth. Don’t forage illegally on public or private lands; check local laws before harvesting. Don’t disturb other organisms (random shrubs are animal homes!) in the process of collecting your food. Take only what you need. Respect plants and environments valuable to Indigenous people and others.

During the 2020 global pandemic, the United States’ food security has remained relatively stable. And yet, unfortunately, folks with income instability struggle with food access due to widening inequalities, which remains a huge issue because plenty of farmed and manufactured food exists in the United States (for those who can afford it). However, even if you are able to purchase or farm your food, it’s highly beneficial to bone up on a few foraging skills.

As we’ve ominously foretold in this column, the world is only becoming more unstable over time. A girl never knows when she’ll wind up smack dab in the middle of reversion to hunter/gatherer society. Even if the apocalypse doesn’t cast us out into the wild, there’s a certain pride that comes with ferreting out, identifying, and finally eating foraged foods. It’s a useful hiking skill: Impress your hiking pals with your vast knowledge of herbs and flora, because everyone loves a plant show-off.  Or identify edible plants when you’ve taken too many stoned wrong turns off the trail and are now listlessly waiting in a canyon for a Medivac helicopter. Because most Americans remain woefully separated from our food’s origins, consuming wilderfood (a word I just made up) can also be a strategy to connect with what we put in our bodies.

You can forage with just your hands, but if you’re serious, it can help to have a few items of the trade. To be hands-free, I wear a hip pack containing a pocket knife (I love True’s ‘Gentleman’s Knife,’ though I am neither gentle nor a man), light work gloves, and a mesh produce bag. The gloves are great for tearing through piles of leaves and rotting wood, and a mesh produce bag lets me carry my precious yet delicate mushrooms, greens, and berries safely. A pocket knife makes for much cleaner cuts of shrooms and greens.

Foraging, like many other survival skills, is largely dependent on context. If you’re in the Mojave Desert in winter, your options are quite different from a Maine forest in June. Here’s how to find the good stuff.

Mushrooms: In general, avoid foraging for mushrooms unless you’re completely sure you’ve identified an edible mushroom. Shrooms are no joke and can make humans (and pets) very sick. While many mushrooms are edible, they may be rare, and require careful scrutiny across a number of dimensions (gills, spores, etc.) to ensure safety. A few edible mushrooms with no poisonous look-alikes include Lion’s Mane, spring and fall morels, and oyster mushrooms.

Wild berries: In spring, summer, and even early fall months, you’ll find berries. Unless you’re with an experienced forager, stick to berries you have seen in the supermarket, i.e. blackberries, raspberries, and blueberries. I’ve found some warmly tucked-away wild blueberries in the north as late as September, but typically the berry season is rather short. Many other birds and mammals favor berries as well, so you’ll have stiff competition.

Nuts: You’ll be presented with the challenge of getting the nut meat out, but many wild nuts are edible. Walnuts can be found in the north (watch out: the fruits stain your hands black!). Acorns are edible, although not often prized, and can be cooked down. Coming soon: my artisanal line of foraged nut butters. (It would sell!)

When you forage in urban areas, use extra care to make sure you aren’t harvesting food from pesticide-laden areas or gross soil that’s full of old dog shit. That said, with a little effort, you can find clean veggies and herbs in many urban areas with uncontaminated soil.

Greens: Dandelions, bitch! Probably the most well-known edible weed, dandelion roots, flowers, and leaves are all edible. Dandelion root is sometimes used as an alternative to coffee for its rich flavor, and the leaves are commonly used in hipster salads. Dandelions are persistent and grow pretty much everywhere.

Another common green in urban and forested areas is lambsquarters, otherwise known as pigweed and wild spinach. True to the last moniker, it does taste like mild spinach, though is part of the amaranth family. Lambsquarters plants are extremely common; you’ve almost definitely had them growing in the back alley. They are easy to spot by their goosefoot shape (lambsquarters plants are also called “goosefoot”) and light dusty white coating. I used to eat them from my backyard until my dog realized this and began passive-aggressively peeing on them.

Stinging nettle or common nettle is also found easily in many urban areas. Nettle is prized for medicinal value, but before consuming in large amounts, you should check with a doc, as you would before any new herbal supplement. Nettle leaves, roots, and stems are all edible. Stinging nettle does sting, and is at least unpleasant, if not painful: always use gloves when harvesting nettle. Once the leaves are cooked, however, they lose their bite and are safe to ingest. Nettles offer relatively high levels of protein and calcium (for greens), so they are a great foraging choice.

There are a few edible fruits and flowers found in urban areas, such as magnolia flowers and rose hips (the Vitamin C-filled fruit of rose plants). While these are less common, they can be delicious when grown in uncontaminated soil.

Desert foraging is not as easy, for obvious reasons. Due to the dry atmosphere, many plants are tough and inedible. However, with a little effort, there’s plenty of food to be found. In summer months, many typical plants and weeds grow edible fruits and flowers. Some varieties of the lush deciduous forests can be found in the desert during wet seasons. Juniper berries aren’t confined to alpine forests; they are also found across desert climes. Cacti, such as cholla and prickly pear, have edible flower buds, though they will require careful de-needling and (usually) cooking.

Nearly all the foods we’ve described are only present during temperate months. If you live at a high latitude, those months are few and far between. However, you can find a few staples even in a polar vortex.

Juniper berries grow year-round and the most common varieties are edible. If you’ve ever had gin, you’ve tasted juniper. Seasoned foragers suggest trying a nibble of a juniper berry; if it tastes bitter, spit that shit right out. The bitter taste heralds a toxic species, likely juniperus sabina, which is not native to the U.S. but often used ornamentally in landscaping. (It should go without saying that ornamental plants should always be avoided, as they may be also treated with pesticides or other chemicals). Luckily, it takes a relatively large amount of berries to harm you, so a small taste should be okay unless you are allergic.

In Vermont I discovered a fungus that is edible and perennial, unlike other shrooms that die out when the cold weather hits. This fungus, wickedly named “Witches’ Butter,” is not the most appealing to look at. Witches butter grows mostly on dead conifers and resembles a growing orange blob. With its sci-fi look, it’s easy to identify and has no very similar toxic lookalikes. Witches’ butter is less discussed in foraging communities, and the jury is out on whether you need to cook it. To be safe, it’s best to heat thoroughly.

This foraging guide merely scratches the delicious surface of the edible wild. Although we’ve covered some of the most common and safe foods, there are dozens to hundreds more (depending on where you live).

If you’re going to forage, learn as much as you can to maximize your experience. The more foods you can identify, the more you can safely reap. Folks from Indigenous tribes often have a wealth of knowledge, as their people have been living off the land since before white colonizers landed on Plymouth Rock. You can also learn which plants are sacred to tribes (and thus hands-off for the rest of us), and as well as which plants have valuable medicinal properties. Check out the Honorable Harvest from Robin Wall Kimmerer, enrolled member of the Citizens of Potawatomi Nation, as well as resources on decolonizing foraging. Respect Mother Earth and all those who rely on her, and you can still have a blast gathering your own picnic.

Top art: Gabriella Shery is an illustrator, graphic designer, and comic artist from Brooklyn, New York. You can find her work on Instagram at @gabshery, or on her website at http://gabriellashery.com.

A Vulva Owner’s Guide To Peeing Outdoors (And a Few Bonus Tips for Penis Owners, Too)

Tags: foraging , hiking , camping , woods , forest , mushrooms , plants , food
Support Feminist Media!
During these troubling political times, independent feminist media is more vital than ever. If our bold, uncensored reporting on women’s issues is important to you, please consider making a donation of $5, $25, $50, or whatever you can afford, to protect and sustain BUST.com.
Thanks so much—we can’t spell BUST without U.