Calling All Lady Stoners: On Shame, Gender, and Weed 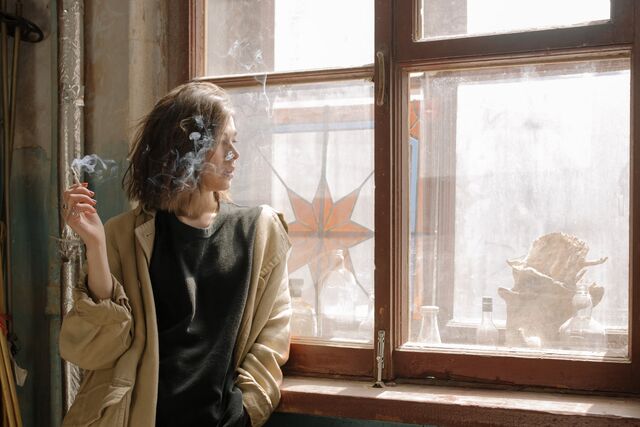 “So you lied to me,” my partner said with an uncommon tinge of anger. The ride to the grocery store seemed as good a time as any to admit I’d been secretly smoking, despite my out-loud resolve five days prior to stop: I was sick, and I needed to prove to myself I could do it. I needed to go thirty days without weed.

We didn’t speak for the rest of the car ride, and parted ways under the fluorescent lights of the produce section. Twenty minutes later, he found me in the dried goods aisle to kiss my forehead and envelop me in a hug. His affection, in spite of frustration, reminded me of his immense aptitude for unconditional empathy and understanding. My shame-fever began to dissipate.

I want to say this newfound desire to stop smoking weed was born of my own volition, but that’s not the case. Cannabinoid Hyperemesis Syndrome (CHS) forced my hand three weeks ago when I ended up in the emergency room.

Four years before my diagnosis, I started feeling an inexplicable and almost constant lack of appetite, frequent bouts of extreme nausea, and intermittent uncontrollable vomiting for hours, sometimes days. First, I thought I could be pregnant (I have an IUD); then, I thought it could have something to do with an ovarian cyst that burst in 2014 (my gynecologist said it was extremely unlikely). For two months, I was convinced I had a thyroid issue (the bloodwork my doctor sent for analysis was normal). When I went to the ER once after four days of throwing up stomach bile, the physician called it basic Gastritis (despite a piss test that I’m certain was shamrock-green). Eventually, I chalked it up to a physical manifestation of depression and called it a day.

A week before my declaration of abstinence, I trudged to the ER for fluids and Zofran after twenty hours of nonstop purging. The physician took a thorough medical history; we spoke about the symptoms I’d been feeling, the doctors I had consulted, and the diagnoses I’d ruled out. Before she left, she asked about substances. I told her I smoked weed every day.

“I only ask because you could have this thing called Cannabinoid Hyperemesis Syndrome,” she said. “It causes all of the symptoms you’ve been having.”

She left to write her orders, and a few minutes later, the nurse was there—starting a line, hanging fluids, and pushing my beloved Zofran. I began furiously Googling, and there it was: Cannabinoid Hyperemesis Syndromeis, a rare cyclical condition seen in long-term daily marijuana users that causes severe and repeated bouts of vomiting, for which abstinence is the only known cure.

My brain exploded. Every single symptom listed aligned perfectly with what I had been experiencing for years. I felt momentary relief; this mysterious illness that plagued me and worried my entire extended family had finally been solved. And then, sheer panic set in. I had to stop smoking weed.

For five years, I’ve been a daily, heavy smoker. The first few times I got high, it made me feel silly, happy, and completely carefree. At the time, those feelings were foreign. The few years prior had been spent watching my young and healthy dad slowly (but somehow too quickly) wither away from esophageal cancer, followed by a year and a half of constant motion: my senior year of college, teaching English in Thailand, falling in love with the man who’s now my husband.

The guttural heartache didn’t surprise me, but it was more than I could handle. The person that had been my compass would not see the life I’d go on to create, making my best-laid plans feel dingy, poisoned by grief. I wasn’t equipped to unload this existential dread on anyone: allowing my feelings to take up space felt selfish and futile. I soon decided unimpeded joy was not in the cards for me and, almost simultaneously, weed became the thing that made me forget that reality. I could feel happiness without sadness. I just needed to be high.

Like any person who relies on a substance, my habit started off innocently enough: I was 24, using small amounts to relax after an annoying day at work. I first bought weed for myself from a nice boy who could have gone to my Jewish summer camp. I’d rendezvous with Summer Camp Samuel once a month, buying a quarter ounce at a time. Looking back, even in the beginning it was compulsive, albeit controlled. I smoked every evening the moment I got home, going through a bowl’s worth of weed and then packing another without second thought. Most weekend mornings I’d get high, grab an iced coffee and my favorite muffin, and walk along the East River.

My habit morphed into addiction once I lived alone. Soon I couldn’t get through a week without buying more. At the time, I had barely enough money to pay rent and bills and feed myself. But I’d always managed to finagle $50 bucks for an eighth, leaving me broke until payday. With every withdrawal, I’d hear my mom’s high-pitched squeal: What if you need emergency cash!?!!!?!

As time passed, getting high was my baseline and access to weed determined my mood. Smoking was a necessary pregame to any activity: grad school lectures, doctor’s appointments, running errands, cooking dinner, going out with friends, family events. I dabbled in every innovation that entered the legal marijuana marketplace, but nothing satisfied me like bud. I loved the ritual of rolling a joint and inhaling. I loved the smell of the flower and the paper as it burned. I never had a strain preference, but I cared about freshness and potency, always choosing the strongest, stickiest stuff I could buy.

When I began noticing symptoms like random nausea and lack of appetite, I’d smoke and be able to keep food down. Suddenly, it served a purpose other than mood stabilization. I felt like weed was my special medicine for something no one could explain, and any concern my family or friends felt about my use was short-sighted and old fashioned.

As I write this, it’s been 10 days since I last smoked, a mile marker I haven’t seen since 2015. Instead of crushing weed in my 3-chambered grinder, packing the bowl piece of my pink bong, and inhaling every single spec of opaque smoke that’s produced, I’m daydreaming about getting high while staving off the lingering symptoms of CHS and physical marijuana withdrawal, among them nausea, body chills, and abdominal pains. Despite the almost daily texts from my drug dealer about his “fire” supply (he probably thinks I’m dead, considering he’s used to hearing from me twice a week), I’ve somehow managed to carve out 10 days weed-free.

In all the doctors' appointments I had been to, no one had ever mentioned it to me. In part, this is due to the fact that CHS has only really gained traction in the last decade: it’s a less common condition, and there is very little peer-reviewed research published on the topic. In larger part, though, I think it’s because I don’t present as a “typical” drug user. Firstly, I’m white—I could write pages on doctors’ assumptions about a person’s health based on race alone. Second, my privileged educational background ensures I can communicate without being questioned in academic, predominantly white spaces. And lastly, I’m a woman.

Almost every depiction of a stoner in mainstream media is male: the high school screw-up hot-boxing his car in the parking lot between classes, the fifth-year senior corralling people into his room to hit the gravity bong at a college party, Seth Rogen’s character in almost any movie he’s ever made. Narratives around marijuana use play out differently for women. When female characters are weed smokers, it’s causal, part of the “I’m wild and crazy and I don’t want to settle down!” narrative. It’s portrayed as a quirky piece of their personality, but not central to their identity. These tropes play out in my real life all the time. People are surprised by the fact that I’m a self-described pothead, and I won’t lie, this element of surprise is something I revel in. I thoroughly enjoy the shocked, impressed look on a person’s face (usually a guy) when they realize I’m the one that brought the weed, and yes, I rolled that joint myself.

The most helpful corner of the internet has been Reddit, shocking to no one under the age of 35. The message boards related to CHS are filled with people speaking my language and providing helpful information, but most of the posts are written by men. One post struck me in particular: a guy who posted on behalf of his girlfriend, a CHS sufferer who was too embarrassed to post on a Reddit thread to complete strangers. I keep thinking about her, and wondering: where are all the lady stoners?

A2018 study that reviewed electronic health records alongside survey data found no relationship between gender and CHS. Survey respondents had to own up to at least 20 smoking days per month for inclusion in the study sample, but the authors listed stigma around drug use as a core limitation to their results. Years ago,while working in the fields of drug policy reform and harm reduction, I learned that social and legal judgement of drug use is levied differently and often more heavily on women. The study posits no statistically significant difference in prevalence of CHS among men and women, but I’m wondering if women were less likely to describe their use honestly, or even agree to participate in the study.

I’m wondering if the immense shame I feel about my drug use is somehow magnified by the fact that I am a woman, and more specifically, a woman whose current age aligns with her “baby-making years.”

I’m wondering if the overwhelming societal pressure women feel to keep their shit together hindered me from admitting to myself and others that I, in fact, do not have my shit together.

I’m wondering how many women I know wrestle with addiction in silence, struggling to legitimize their own feelings and need for support.

At present, I don’t know who I am without weed. It sounds dramatic, but it’s also true. As each day passes, I place a little more trust in myself that maybe I can be present with my emotions and share them with people that love me. Maybe I can get to thirty days and beyond. Maybe I can become a person who enjoys weed but doesn’t depend on it. Maybe not. In the meantime, I’ve decided to throw shame away and cut myself some slack.

Could The War On Drugs Finally Be Coming To An End?

Jordan works at the intersection of health equity and decarceration, and has a Master's in Public Health. She lives in Queens, NY with her husband and dog.

Tags: stoners , stereotypes , weed , marijuana , shame , addiction
Support Feminist Media! During these troubling political times, independent feminist media is more vital than ever. If our bold, uncensored reporting on women’s issues is important to you, please consider making a donation of $5, $25, $50, or whatever you can afford, to protect and sustain BUST.com. Thanks so much—we can’t spell BUST without U.