The Lesbians Are Alright 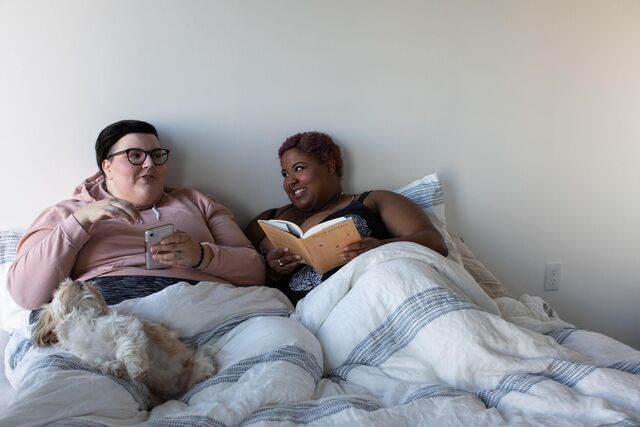 Lesbians, a species known for obsessive love with an insatiable desire to be around one’s partner at all times, might be, in some ways, living in their golden era. The COVID-19 pandemic has given the community exactly what it has always wanted: an opportunity to live in one’s home watering plants, walking dogs, being “forced” to stay in watching true crime documentaries and making snack plates for one another throughout the day. Sure, the economy is collapsing and many of us are on the daily brink of a mental health crisis, but these are not new ways of living. The majority of queer folks have battled economic insecurity, unsure futures, and ongoing mental health difficulties throughout their lives, at least now we get to also engage in our favorite extreme sport, nesting.

“I think lesbians are the ultimate winner of quarantine,” says Beau Lopez, who lives with her wife and their dog in New Jersey. “Not because [many of us deal with lifelong] anxiety and depression – but because, from day one, lesbians already spend 99.99% of their time together, so doing that during quarantine is just normal. At least, this is what me and another couple think. We were just talking about this topic.”

Of course, she was just talking this, we are always talking, we never stop talking, which might be another reason we’re faring better than other groups.

Maria Garcia, who resides in Jackson Heights, Queens and has been living with her partner for over 10 years, has been thoroughly enjoying her new quarantine routine. “We wake up at 7:00 and take turns getting coffee for each other in bed and then we lounge for an hour before we start our day,” she says. “Halfway through the workday, we go get a ‘sneaky’ coffee, which is when we leave our laptop offices to get out of the apartment together for a few minutes and grab a coffee from our favorite neighborhood spot.”

When I ask Maria about the loss of her social life, which was previously packed to the gills during the week with various classes, drinks with friends, and workout groups, she adds, “There is a pandemic. Nobody really wants to see anyone, and nobody is doing anything. Everything feels too risky, I’m not having my normal FOMO.”

Her partner, C.G., agrees and adds that she believes the overall adjustment has been easier for lesbians because “[lesbian relationships are] deliberate in communicating how roles will unfold and that communication comes in handy when the world is on fire.” I think about the multiple and ongoing conversations I’ve had with my own wife about how exactly we can make working from full time, raising a baby, and living in one space work. It’s not an exaggeration to say we’re constantly talking, negotiating needs, and kvetching about our feelings. It’s exhausting and comical to some degree, but the openness to communicate does make our lives more manageable.

C.G. and I joke about how quickly we’ve all seemed to adjust to the new way of the world, and she adds, “I think we’re [queer people] good at responding to things flexibly and creatively. A lot of our lives are made up, in a way. [There hasn’t been] such a laid-out path for us to follow, so when things get hairy and we don’t see a way ahead it feels like, ‘oh, okay, we’ve been here before.’”

This is not to say that the lesbians are mentally adjusted to the current political and pandemic climate: however, they do have a leg up in dealing with mental health difficulties. Many people in the country are experiencing anxiety and depression for the first time in their lives. A.K., who has battled diagnosed depression and run of the mill anxiety for her whole life, says, “In the beginning of March, a white male relative went down an anxiety spiral. He was inconsolable about his world changing. He said he knew this was a huge privilege, but he had never felt so vulnerable. I felt bad for how scared he felt, but it was hard to relate to his novelty of feeling unsafe.” Depression and anxiety aside, A.K. said she is “perfectly happy watering my garden and doing obscure crafts at home and cherishing the chance to spend a whole lot of time with [her partner]. We adopted one of our foster puppies and that has been amazing.”

In summary: the lesbians are alright. And if you’re still struggling to adjust, maybe try living life more on the Sapphic side.